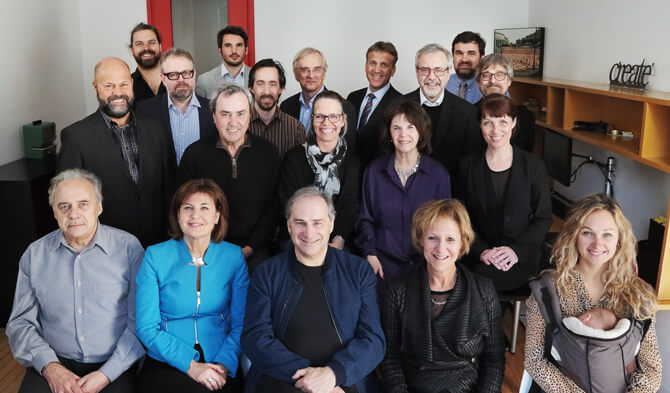 Montreal, April 21, 2016 – The Quartier des Spectacles Partnership is proud to introduce the directors and officers who will serve on its board of directors for 2016-17, following an election at its annual general meeting held on April 20 at the Le Balcon concert hall.

The Partnership’s board is composed of directors from a variety of sectors active within the Quartier des Spectacles. Members are elected for two-year terms. Through this process, the Partnership helps the district’s main stakeholders to consult with each other and work jointly. Seven directorships were open in three categories: cultural, socio-economic and community.

For the four positions open to members who are either self-employed individuals in the cultural sector, or employees of an artistic or cultural organization or company, the following directors were elected or re-elected: Christine Barbe (Bibliothèque et Archives nationales du Québec, Alain Grégoire (Maison Théâtre), Nadine Marchand (MONTRÉAL COMPLÈTEMENT CIRQUE) and Sandra O’Connor (Monument-National).

The two positions for members from a business association, the tourism industry, institutions and companies and organizations in fields other than business, were filled by: Michel Bourdon (Tourisme Montréal) and Philip O’Dwyer (Société de développement du Quartier Latin).

One director was elected in the category of members from a residents’ association or community organization based in the Quartier des Spectacles: Émile Roux (Société de développement social).

The composition of the 2016-17 board of directors is as follows:

• one (1) director elected from among the members of a residents’ association or community organization active in the Quartier des Spectacles;

These first three categories account for the 14 directors elected at the annual general meeting.

• two (2) directors from the cultural sector are appointed by the Board of directors.

These directors are members of organizations that produce a major performing arts event taking place primarily within the Quartier des Spectacles and whose programming generates at least one million annual admissions to outdoor and indoor venues.

• two (2) directors, one each from two public institutions that play a unique and essential role in the educational and cultural development of the Quartier des Spectacles,

• three (3) directors appointed by the Board for their expertise and experience in a specific field;

Jacques Primeau was re-elected as chair of the Board of Directors, a position he has held since 2012. Vice-chair Lorraine Pintal, who has served for the last four years, was also re-elected. Alexandre Taillefer remains a director but his vice-chair duties will be taken over by Christiane Barbe. Monique Goyette, former vice-rector of administration and finance at UQAM will return as treasurer and also take on the role of general secretary previously occupied by Suzanne Raynault. Suzanne Laverdière, director of culture and heritage for the Ville de Montréal, will now attend Board meetings as an observer.

The Partnership congratulates the newly elected directors and thanks everyone who stood for election. Over the course of the year, several directors left the Board. We extend our sincere thanks for their much-appreciated service: Ghyslain Boileau (Society for Arts and Technology), Oona Stock (Société de développement social), Félix Martel (Monument-National) and Joanne Chevrier (Hydro-Québec), who leaves the board after serving for seven years. Lastly, the organization wishes to note the departure of Jean-Robert Choquet from the position of director of culture and heritage for the Ville de Montréal, and a member of the Board since October 2009. The Partnership is grateful to Mr. Choquet for his exceptional and influential contributions to Montreal’s cultural vitality, particularly to the progress made by the Quartier des Spectacles and the Partnership.

a year of consolidation and recognition

At the general meeting, the Partnership’s leadership group also gave the membership a summary of the past year’s activities. 2015 was a year of significant achievements in the Quartier des Spectacles, particularly in terms of attendance and box office receipts at performance venues in the Quartier. It was also a good year for cultural activities in the Quartier’s public spaces.

Les Jardins Gamelin was another highlight of the year for the Quartier des Spectacles Partnership, thanks to a visitor-friendly setup and a rich, diverse cultural program running seven days a week from May through October. Throughout the season, attendance remained strong for the 230 activities on the program. Les Jardins Gamelin was a major project that owed its success to the exceptional contributions of several partners, including the Ville de Montréal and the borough of Ville-Marie. Furthermore, 2015 was a year of consolidation for the organization both in terms of capabilities and the management of urban cultural spaces and technology infrastructure. It is also important to highlight the Urban Digital Laboratory, which has emerged as an economic and artistic engine that is helping Montreal position itself as one of the world’s leading smart cities.

The Quartier des Spectacles Partnership, founded in 2003, is a non-profit organization with some 60 members active in the district. Its Board of Directors includes representatives of cultural organizations and institutions, educational institutions, business, municipal government and community organizations. The Partnership’s full-time staff of approximately 20 oversees activities and programs cultural presentations for the Quartier des Spectacles. The team is also responsible for the Quartier’s public spaces, specialized facilities, illumination and promotion. The Partnership is supported by the Ville de Montréal and the Secrétariat à la région métropolitaine.