Announcing the artists for the KM³ public art walk! 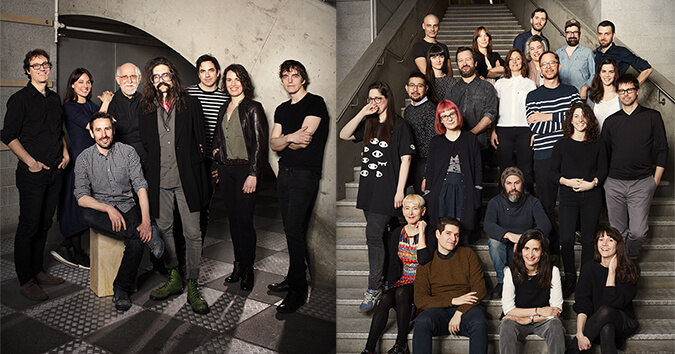 Montreal, April 18, 2017 – The Quartier des Spectacles Partnership is proud to announce the artists who will participate in KM3 (“kilomètre cube”), the large-scale art walk to be presented from August 30 to October 15, 2017 in celebration of Montreal’s 375th anniversary.

The event features more than 20 original pieces in the visual arts, digital arts, design and architecture, to be displayed outdoors on building walls, in public squares and at several unconventional sites within the Quartier des Spectacles. The mix of disciplines will contribute to the event’s originality, and all works will be created specifically for KM3. Whether participatory, immersive, playful, digital or contemplative, they will transform the way Montrealers and visitors see the city.

The KM3 temporary public art walk is driven by the vision of curators Melissa Mongiat and Mouna Andraos of Daily tous les jours. Each in its own way, the works will seek to change the way we look at the city and experience urban space. KM3 will invite viewers to explore a unique space and encourage them to imagine the city in new ways. Inspired by the theme of neighbours, the curators designed the elements linking the various artworks and installations, giving KM3 a warm, accessible site for everyone from art enthusiasts to families and general audiences. The walk will be an interesting experience whether visitors explore it in its entirety, from east to west through the Quartier, or encounter it piecemeal during their daily routine.

Through the artists and works of KM3, we want to reveal a fantastic imaginary city that could also be our regular, everyday city – accessible, beautiful, inviting, stunning. A city whose public spaces are truly shared. Public space must become a focal point in our efforts to nurture empathy, appreciate proximity and celebrate difference,” said the co-curators, Melissa Mongiat and Mouna Andraos of Daily tous les jours.

The curators are working closely with Julie Bélisle of the conservation team at the Musée d’art contemporain de Montréal, serving as a visual arts consultant for the event, and with Guillaume Lord, associate exhibition designer.

The curators selected most of the 30 Quebec artists who will present a piece during KM3. The quality and originality of their artistic approach, their willingness to take risks, and their sensitivity to urban life: these are the qualities shared by every artist participating in KM3. First and foremost, the curators sought out artists from a wide variety of backgrounds, rather than restricting themselves to artists with experience in public art.

We are very pleased to give the artists and the public this experience in the heart of downtown Montreal. With KM3, the outdoor spaces of the Quartier des Spectacles will become both creative territories for artists, and places for the public to enjoy an engaging group of artworks. It is an invitation to think about our relationship with the city through art, and to refresh the experience of city life,” said Pascale Daigle, programming director for the Quartier des Spectacles Partnership.

Several international artists are involved with KM3 and will be announced in May. The concepts for the 20 works will be revealed in early August.

Here is the list of artists participating in KM3.

Artists’ biographies are available here. (in French only). 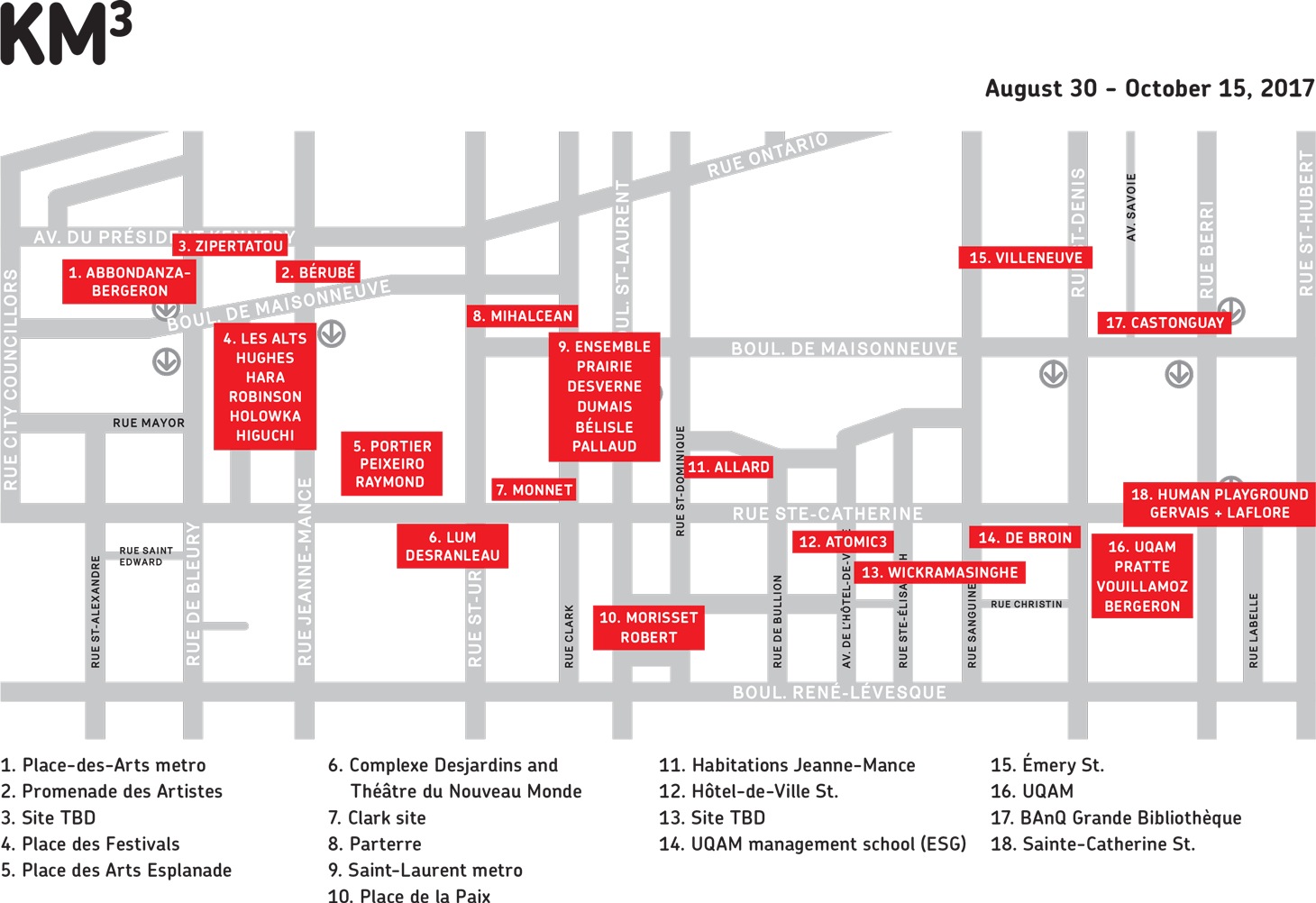 KM3 is an initiative of the Quartier des Spectacles Partnership, and one of the Quebec government’s gifts to Montreal on the occasion of its 375th anniversary. The event is made possible by the financial support of, among others, the government of Quebec and the Ville de Montréal, within the framework of the Entente sur le développement culturel de Montréal.

Melissa Mongiat and Mouna Andraos are the co-founders of Daily tous les jours, a studio that creates multidisciplinary works at the intersection of design, technology and citizen participation. Their installations, including 21 Balançoires/21 Swings and McLarena, both designed for the Quartier des Spectacles, seek to bring a sense of wonder back to everyday life by encouraging chance encounters and conversations. They are also behind Chorégraphies pour des humains et des étoiles, the first digital artwork to be included in the Ville de Montréal’s collection of public artworks, as well as curation and exhibition design for Extra Fantômes, an exhibition presented at the Gaîté lyrique in Paris in 2016.

Their work has won several awards, including the Phyllis Lambert Grant presented by the Bureau de design de la Ville de Montréal (2010), Best in Show at the Interaction Design Awards (2013), the Grand Award at the UNESCO Shenzen Design Awards (2014), the Knight Cities Challenge Global Innovators Prize (2015) and, most recently, a Fast Company Innovation x Design Award. They are frequently invited to give lectures and lead workshops around the world.

The Quartier des Spectacles is Montreal’s cultural heart, boasting North America’s most concentrated and diverse group of cultural venues. The district is the year-round host to countless festivals and events, many of which include free outdoor shows and activities. The Quartier hosts innovative urban installations involving cutting-edge lighting design, immersive environments or interactive digital spaces. Year round, the Quartier presents artistic video projections on several building façades.  The Quartier des Spectacles is a showcase for new multimedia technology, making Montreal a global leader in the urban exhibition of digital content.

The Quartier des Spectacles Partnership, founded in 2003, is a non-profit organization with more than 60 members active in the district. It is responsible for animating the Quartier des Spectacles by programming cultural activities, managing and animating public spaces, providing distinctive illumination, and promoting the Quartier as a must-visit cultural destination. The Partnership is supported by the Ville de Montréal and the Secrétariat à la région métropolitaine.


Photos of the artists and the curators: https://we.tl/kt4WWCFv8x
Photo Credit : Jocelyn Michel - Consulat