A 4th diverse and festive season of culture in Les JARDINS GAMELIN! 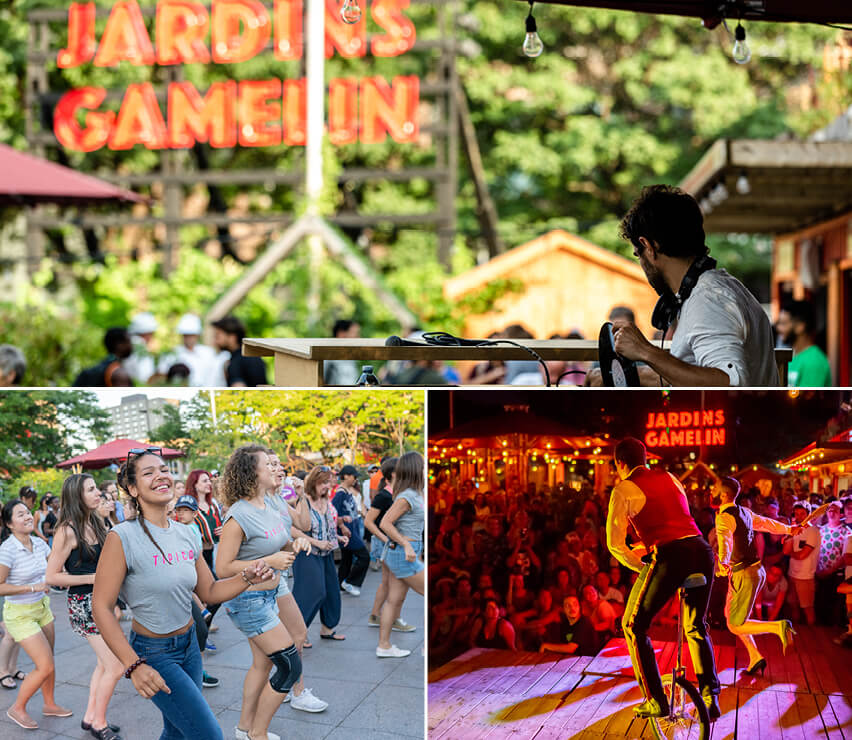 Montreal, October 11, 2018 – On September 30, the Quartier des Spectacles Partnership closed the fourth season of Les Jardins Gamelin. Once again this year, the gardens were the heart of the city, welcoming audiences and artists of every stripe. Thanks to a packed program of free activities and a warm, inviting setting, the public turned out in large numbers to enjoy the green oasis in the Quartier des Spectacles. Les Jardins Gamelin will return for a fifth season, starting in the spring of 2019.

In the meantime, everyone is invited to extend their summer until October 14 with a photo exhibition, Vues sur les Jardins Gamelin, featuring entries in a contest that encouraged amateur and professional photographers to capture slices of life in the Jardins.

This season, Les Jardins Gamelin celebrated Montreal’s musical diversity, with 43 of 64 live music acts on the Jardins’ stage playing musical genres from around the world. In all, the 43 acts included more than 200 artists from 25 different ethnic groups.

“The heart of our mission for Les Jardins Gamelin is to truly reflect the spirit of Montreal. We’re very proud that this year we presented more artists from Montreal than ever, and they came from a very diverse range of backgrounds. The wonderful variety of cultural gatherings also showcased our city’s creative diversity. The Quartier des Spectacles Partnership and I extend our deepest, most sincere thanks to all the partners involved in the Jardins, who helped the initiative excite the public and mature into a reflection of all Montrealers,” said Jacques Primeau, chair of the board of directors, Quartier des Spectacles Partnership.

Families and day camps also made excellent use of the gardens, thanks in particular to the Maison jaune, a play space with creative activities based on life in the Jardins, and to the Petits bonheurs family mornings, presented by the organization of the same name, which held art-appreciation workshops for children ages 2 to 12.

Thousands of Montrealers once again embraced Les Jardins Gamelin as a place to meet, have fun and relax. Day and night for 18 weeks, people came out in large numbers for the activities and events presented in the gardens.

All season long, the public once again had the opportunity to learn about urban agriculture through workshops and talks presented by Sentier Urbain, groove to Wednesday DJ sessions by the Tupi Collective, satisfy their hunger and their ears with the retro Brunches, have a laugh at karaoke night, relax with yoga and meditation, look back to the past with the BAnQ’s archivists, and play board and trivia games with Randolph – all under the watchful eyes of the now famous Gamélites, the little stone beings that made their presence felt in the Jardins all summer.

Audiences also had plenty of music to enjoy thanks to several series featuring 100% local talent. The Escales musicales series delivered global sounds with, among others, Cumbia Carnaval, African Guitar Spirit, Labess, Connexions brésiliennes, Salamate Gnawa; the Ce soir, on danse ! series got the crowd hopping to the sounds of The Ants, Pull UP Selecta, Paupière, Pierre Kwenders and Qualité de Luxe; the Midis jazz, with trumpeter Jacques Kuba Séguin, made lunchtime even tastier; and talented vocalists had pride of place with Mon Doux Saigneur, Caroline Savoie, Julien Sagot, Mat Vezio and the pop of Cats On Tree, Holy Two and La Fourmilière.

Returning favourites were as successful as ever, including the Montréal Complètement Cirque festival, which presented an all-new show, Phénix, and movie nights in the Jardins, presented in partnership with Radio-Canada. Two summer dancing series, Les bals de l’été and the much-loved Salsafolie evenings, made the Jardins more than a great place to go dancing – which thousands of people did every weekend – but one of the city’s most beautiful and inclusive places to do it.

Lastly, new event series attracted the curious, such as Les Jardins en cabaret, which transformed the space into an open-air cabaret every Tuesday in August, featuring performers such as Carmagnole, artists Fierté Montréal Pride, as well as poets and singers of Debout : Actes de parole, and unique numbers by Phénoména.

Over 126 days, more than 600 artists from a wide range of disciplines participated in nearly 400 activities, making the Jardins’ fourth season a most lively one! Here are a few of the many partners involved: 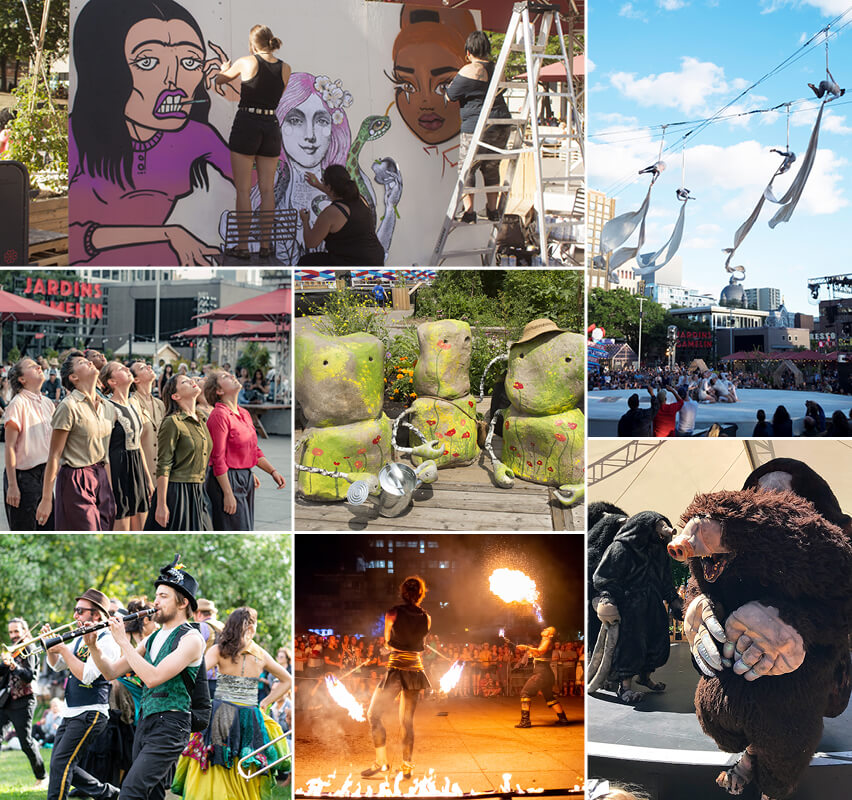 LES JARDINS GAMELIN, A LIVING SPACE FOR ALL

Welcoming people from many different neighbourhoods and cultural backgrounds, families, young people and seniors, workers and even the marginalized, Les Jardins Gamelin have always been about inclusiveness and peaceful co-existence. In the ongoing effort to encourage all Montrealers to embrace Place Émilie-Gamelin once again, several key institutions played essential social outreach and intervention roles, including the Borough of Ville-Marie, the Service de police de la Ville de Montréal, the Société de développement social, Sentier Urbain and local community organization Cactus.

The Société de développement social, which builds bridges with the park’s regular users, works to understand their realities and guides and helps them in their efforts to reintegrate and rehabilitate, called on the expertise of Exeko this year to lead debates on pressing issues and organize artistic activities for marginalized participants. Sentier Urbain, a social greening organization, led a special program for homeless people, with the inclusive aim of making them an integral part of life in the Jardins. The organization donated more than 500 plates to community organizations visiting the Jardins, and gave members of the public dozens of kilos of vegetables grown on-site.

Lastly, for the first time Les Jardins Gamelin included a quiet zone for women or anyone else feeling vulnerable, as part of the Hirondelles, an initiative of L'Équipe Spectra.

THIS SEASON BY THE NUMBERS...

In the spring of 2015, Place Émilie-Gamelin showed a new face to Quartier des Spectacles residents and visitors with Les Jardins Gamelin, open from May to October. A large, green and inviting civic space in the heart of downtown, Les Jardins Gamelin return every year with an original temporary layout and a versatile set of facilities. The space’s unique, accessible and human-scale programming, which has now completed four seasons, has become a part of daily life for residents and visitors, making Les Jardins Gamelin an inclusive gathering place in true Montreal style. The initiative, led by the Quartier des Spectacles Partnership, is produced in collaboration with Pépinière & co, Sentier Urbain and numerous partners, with the financial support of the borough of Ville-Marie.

The Quartier des Spectacles Partnership, founded in 2003, is a non-profit organization with more than 80 members active in the district. It is responsible for animating the Quartier des Spectacles by programming cultural activities, managing and animating public spaces, providing distinctive illumination, and promoting the Quartier as a must-visit cultural destination. The Partnership is supported by the Ville de Montréal.