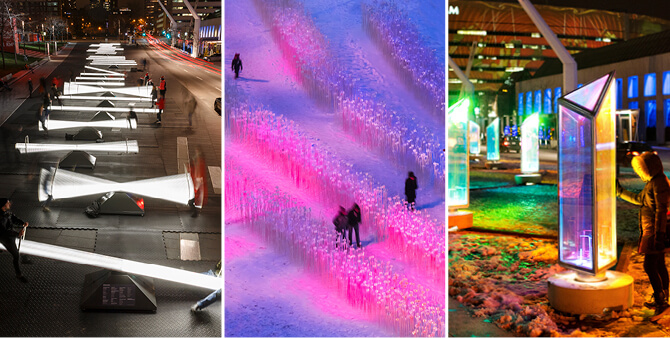 Montreal, November 22, 2016 – Made-in-Montreal high-tech art will have some new international showcases this December. Three interactive installations created in collaboration with the Quartier des Spectacles Partnership will be part of the Holiday magic in three cities in Europe and North America.

After a stop in London in October, Impulse continues its European tour with stops in Brussels and Lugano. From November 25 to January 1, the Belgian capital will host the famous illuminated seesaws as part of the city’s Plaisir d’hiver winter festival, where the installation will be one of the centrepieces of the popular event’s program. This is the second time Brussels has featured works first presented in the Quartier des Spectacles: the city also hosted the immersive Iceberg by ATOMIC3 in the Place de la Monnaie in 2014.

Meanwhile, the city of Lugano, Switzerland, has decided to make Impulse a winter attraction for its new cultural centre, Lugano Arte e Cultura, one of the country’s largest cultural institutions. The installation, created by Lateral Office and CS Design, was first presented in Montreal’s Place des Festivals last winter. Lugano residents can explore and play with it from December 3 to January 8.

The agglomeration of Cergy-Pontoise, one of the regional centres of the Greater Paris area, will present the illuminated field of Entre les rangs, which delighted Montrealers three years ago. With its 28,000 flexible stems topped with reflectors, the work by KANVA is a luminous metaphor for a windswept wheat field. The installation will glitter in Grande Centre district of Cergy from December 10 to January 1, as part of the Lumières d’hiver event.

Also in December, Prismatica will be installed on Parliament Hill in Ottawa (December 7 to January 7) as part of the city’s participation in the Christmas Lights Across Canada event. The same installation will also be a feature attraction on the banks of the Potomac River in Washington, D.C., on the occasion of the Georgetown GLOW exhibition of illuminated public art (December 1 to January 1). Created by RAW Design in collaboration with ATOMIC3, the participatory installation features 50 multi-coloured prisms that will collectively form giant kaleidoscopes on their respective sites in the two national capitals. Prismatica was originally presented in the Quartier des Spectacles in the winter of 2014-15 as part of Luminothérapie.

In recent years, international audiences have enjoyed several works created for the Quartier des Spectacles, including 21 Balançoires/21 Swings and McLarena by Daily tous les jours,Trouve Bob by the Champagne Club Sandwich collective, and Iceberg by ATOMIC3 and Appareil Architecture. Numerous cities around the world have expressed interest in the digital art created in the Quartier. Our artists’ work is garnering significant attention, and other export initiatives should be announced shortly.

International interest in the Quartier des Spectacles is driven to a significant extent by Luminothérapie, Quebec’s largest open competition for temporary installations. The event’s mission is to create an original interactive winter experience for visitors and stimulate creativity in urban installations and digital art.

This international recognition is also the result of the Partnership’s efforts to promote its artists, creations and expertise on the international scene. The Partnership is opening more discussions with other cultural cities and is a member of major international networks, including the Connecting Cities Network, the Lighting Urban Community International (LUCI), and the Global Cultural Districts Network (GCDN), an association of cities committed to joining forces and pooling expertise in the management of cultural districts.

The Quartier des Spectacles Partnership is a non-profit organization responsible for operating and programming the Quartier’s lively public spaces, for illuminating the area through distinctive lighting design as well as for promoting this must-visit cultural destination. The Partnership is a member of several international networks, including the Connecting Cities Network and Lighting Urban Community International (LUCI), as well as the Global Cultural Districts Network.