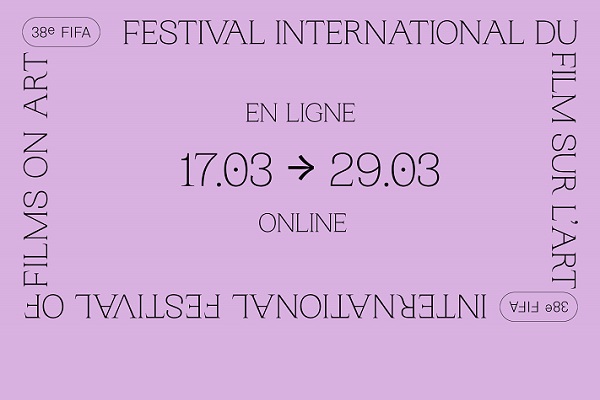 Highly motivated by the encouragement of the whole community, the team of the International Festival of Films on Art (FIFA) has decided to rebound in the face of the adversity caused by COVID-19 and the cancellation of its indoor event and launch the 38th edition of the festival online. Discover a rich program available online across Canada on online platform, from Wednesday, March 18 to Sunday, March 29 at midnight.

Recognized as the only Festival in the Americas specializes in the niche of films on art, and as the largest of its kind in the world, the International Festival of Films on Art has become, over the years, a leader on the international cultural scene. A rich and distinctive program of films on art and medias arts from around the world, a series of special events that brings people together, and the participation of famous people as honorary president, spokespersons, members of jury and guest artists have made it one of Montreal’s greatest cultural event.

Of a competitive nature, the Festival also gives out awards established by an international jury, which annually undertakes a tour of worldwide renowned cultural institutions.

The FIFA catalyses the attention of a growing number of high-level professionals, local and foreign media, cultural institutions, and of course, that of an ever denser and more loyal public. Reuniting, each year, no less than 36,000 festival-goers of all ages and from all backgrounds, and 250 professionals from the world’s cinematographic industry, FIFA has become a focal point for artists and artisans from the art and film communities, as well as for art and cinema enthusiasts.

To this day, the Festival has presented nearly 5000 films on various artistic topics from 71 countries, showcased over 11,000 artists and awarded no less than 300 awards with the support of 157 jury members.

International Festival of Films on Art (FIFA) : activities at this venue (0)

Search for an activity

List of activities presented in the Quartier des spectacles