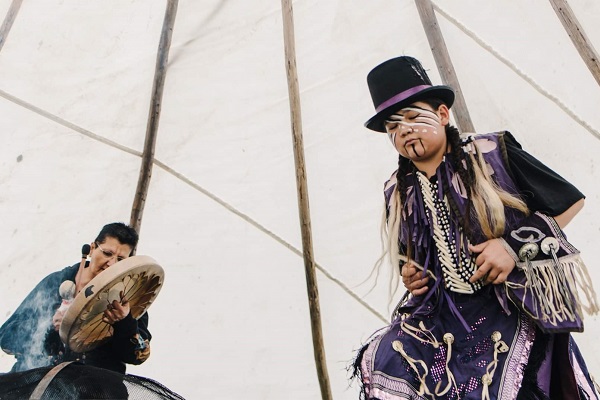 The group’s debut single is now out everywhere,with the entire globe watching and the help of the top Indigenous producer in Canada, the Grammy Award-winning David Strickland, who produced the song. Strickland is also a major part of Drake’s team on all of his breakout albums. With multiple Platinum records and Juno Awards to his name, Strickland brings over 30 years’ experience to the project and has worked with artists such as Sade, Method Man and Redman, and hip-hop legend Erik Sermon.

For the past 11 years, the group has been playing non-stop around their hometown of Edmonton, at both traditional Pow Wow events and as a go-to artist at events in support of Women’s Rights, the environment, and other social issues that impact marginalized communities. Channelling the authentic spirit of Cree music and its healing power to unite people, Chubby Cree’s powerful performances regularly bring audience members to tears.

The group also stands out as an anomaly in the current Cree music culture as women have been forbidden to drum since the time of European colonization by the men. Inspired by her late grandfather, Carol has defiantly stood against this, having been told, "You're going to help bring women back to the drum because that's where they belong. Children belong there. Why? Because that's the only time anyone's going to heal."