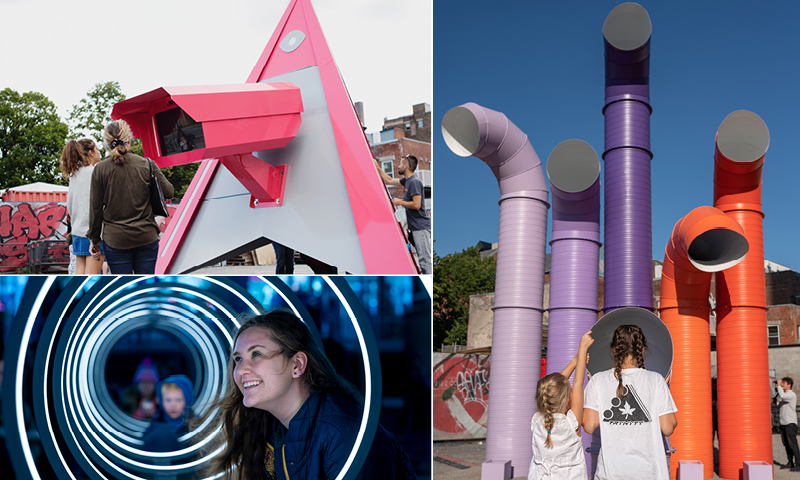 Montreal, August 14, 2019 – From August 15 to October 14, the Quartier des Spectacles Partnership presents a trio of interactive installations in the Quartier’s public spaces: Wind Instrument by Étienne Paquette, The Compassion Machine by Ensemble Ensemble and, for the first time in Montreal, Spectrum by HUB Studio.

The works illustrate new narrative forms for public space, and invite active public participation. The thematic installations advance the dialogue between residents and their city, thanks to the creators’ artistic contributions to discussions on issues affecting community life.

Three distinct experiences, exploring our relationships with the city and each other

Spectrum is a new installation co-produced by the Quartier des Spectacles Partnership in collaboration with a major international partner, Quays Culture, an organization presenting temporary public art and cultural events in Manchester, England. In 2018, the two organizations joined forces to issue a call for proposals, open to artists from Quebec and the United Kingdom, for an outdoor digital interactive work. The proposal from Montreal-based interactive studio HUB Studio was chosen from among more than 20 submissions.

Spectrum sheds light on the phenomenon of communication, by displaying the path taken by the waves generated by voices and other sounds. Here, the fundamental means of interpersonal communication, speech, is disconnected from language. Instead, it becomes a cascade of waves and luminous pulses, illustrating the fascinating trajectories of sound. Spectrum is also an intimate listening experience inviting people to engage in a sound-and-light dialogue with other participants and to take the time to listen, in order to see.

Wind Instrument, a popular installation that won a Numix 2018 award for in-situ interactive installations, returns for a second year in a row in August. The installation by Étienne Paquette is a monumental work comprising six tubes as tall as 28 feet. It responds to variations in ambient noise and public interaction by creating soothing musical harmonies. An invitation for urbanites to listen closely to their environment and make their own contribution to the audible landscape.

The team at Ensemble Ensemble returns to the Quartier des Spectacles with The Compassion Machine, opening August 30. This time, the installation is fitted with two cameras. Using subverted algorithms from surveillance systems, the machine analyses our capacity for kindness and our predisposition to do good. The Compassion Machine even challenges its users. An invitation to reject everyday suspicion. 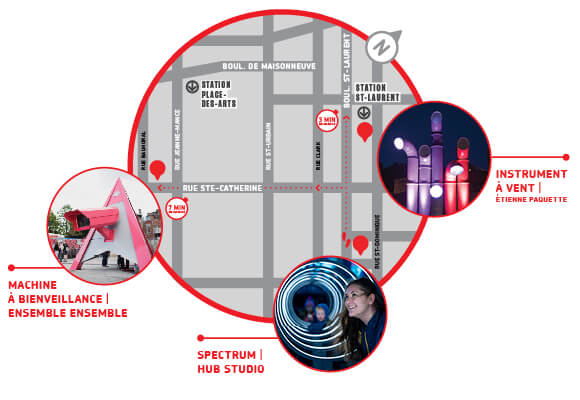 Official launch
Thursday, September 5, 5:30 p.m.
The public and media are invited to explore the three installations with the artists, on a walk starting at the corner of Balmoral and Sainte-Catherine. On this leisurely stroll you’ll learn more about the works and see the Quartier in a new light.
RSVP to marie.lamoureux@quartierdesspectacles.com

This 45 minutes guided tour will be led by an experienced guide.
In French only. Space is limited. Reserve here.

SPECTRUM
A creation by HUB Studio

Because of the Cinéma urbain outdoor film series, the installation will close at 8:45 p.m. on Tuesday, August 20 and 27 and on Tuesday, September 3.

A co-production of Quays Culture in Manchester, U.K., and the Quartier des Spectacles Partnership. Spectrum was presented in December 2018 at Salford Quays as part of the Lightwaves digital light festival.

A co-production of the National Film Board of Canada, the Quartier des Spectacles Partnership and LA SERRE – arts vivants, Wind Instrument was originally presented in 2018 as part of the POSSIBLES project.

THE COMPASSION MACHINE
A creation by Ensemble Ensemble

HUB Studio
HUB is a multidisciplinary creative studio. We create, direct and produce meaningful multi-sensory experiences for live shows and public spaces. At the crossroads of arts, design and technology, we use creative technologies to touch people and tell stories on stage and in public places. With our unique theatrical approach, we make the world a stage through video projection and mapping, lighting, immersive environments and interactive technologies. With a creative team of designers and professionals, we lead every project through a simple and fluid process from ideas to reality.

Étienne Paquette
Étienne Paquette creates immersive installations that draw on multiple art forms to transport visitors to fantastical new places. His work is increasingly transdisciplinary, exploring novel ways for the public to take part in stories. In recent years, he has used interactive works to study the “sensitive city” and the role of intelligent systems in public space. In 2019, his Wind Instrument won a Numix Award for in-situ interactive installations.

About the Quartier des spectacles and the partnership