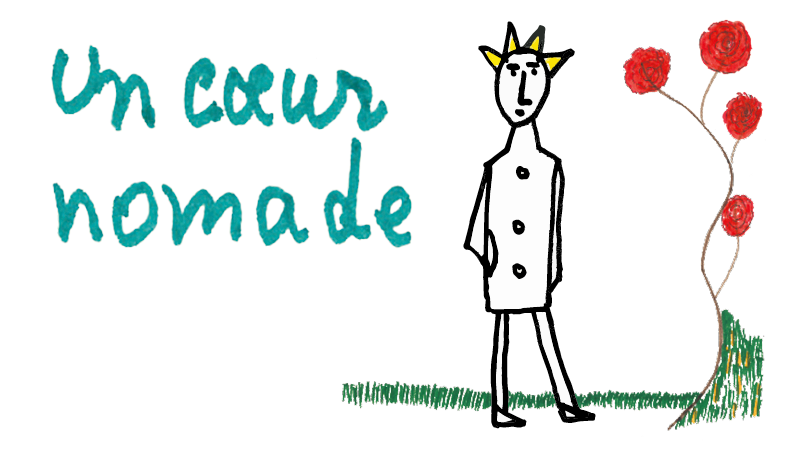 “I feel like a kid who’s been given permission to draw and write on the walls of the city.” – Dany Laferrière

Montreal, August 19, 2020 – From August 20 to November 1 this year, the Quartier des Spectacles Partnership will present Un cœur nomade, a free exhibition on the Promenade des Artistes. The exhibition is a celebration of the life and work of Dany Laferrière on the occasion the 35th anniversary of the beginning of his literary career.

Un cœur nomade uses the large display windows on De Maisonneuve Blvd. to present a charming and colourful immersion in the world of Dany Laferrière, inspired by his three graphic novels (L’exil vaut le voyage, Vers d’autres rives, Autoportrait de Paris avec Chat published by Les Éditions du Boréal). In addition, every Wednesday through Sunday evening visitors will enjoy the architectural projection L’Exil vaut le voyage. The animated short film, projected on the façade of UQAM’s Pavillon Président-Kennedy, is made possible by the production assistance and animation expertise of the National Film Board of Canada. The projection, which complements the exhibition, features memorable places and characters from Laferrière’s stories, capturing his unique voice through words and images from his three graphic novels.

From his childhood in Petit-Goâve, Haïti, to his election to the Académie française and his life in Montreal, where he has published all of his books, Un cœur nomade and L’Exil vaut le voyage invite passers-by to explore the world of a multi-talented man: a prolific writer whose works have been translated around the world and received numerous awards and honours. This tribute looks at a life shaped by a golden childhood, exile, women, and hours spent reading in a pink bathtub.

A true interactive experience reflecting the world of a writer and illustrator who is treasured in Quebec, the companion projects are the result of an initiative of the Quartier des Spectacles Partnership and of Félix Dagenais’ insightful exploration of Laferrière’s work. Thanks to a collaboration between Dagenais – the project’s curator and creative director – graphic and scenic designer Judith Portier and composer and sound designer Javier Asencio for Un cœur nomade, and with filmmaker Nicola Lemay for L’Exil vaut le voyage (co-production NBF), Montreal will celebrate the brilliant, poetic and colourful world of Dany Laferrière.

“Dany Laferrière has always had a gift for transporting us. Through his words and images, this unique artist takes us far away from our everyday lives and into the heart of his poetry. In this most unusual year, when we were all forced to stay home, the exhibition Un cœur nomade and its accompanying video projection, L’Exil vaut le voyage, are enticing invitations to escape, and they will surely go straight to every Montrealer’s heart. We have the good fortune and great honour to have Dany Laferrière as a member of our big Montreal family. I invite everyone to come to the Quartier des Spectacles and celebrate his work, discover his words and immerse themselves in his images,” said Montreal mayor Valérie Plante.

“Un cœur nomade is a perfect fit for the Partnership’s mission of animating public spaces. It’s also a gift to mark the first 35 years of Dany Laferrière’s literary career – an artist who has helped Montreal shine on the world stage. This tribute is also part of the summer relaunch of downtown Montreal spearheaded by the Partnership and several collaborators. As such, it is an invitation for Montrealers to come see the world of a great writer, and to spend some quality time in the Quartier des Spectacles,” said Monique Simard, chair of the board of directors for the Quartier des Spectacles Partnership.

“Exile can be defined as the condition of a person who has had to leave behind what they value most. The power of the condition itself and of the emotions that accompany it are things that Dany Laferrière understands all too well. Today, the video projection L’Exil vaut le voyage celebrates a man who has, for the last 35 years, shown us many remarkable talents. Nicola Lemay and Félix Dagenais have pooled their talent to illustrate the writer’s life in images and words. The NFB is proud to co-produce this work, which reveals itself to the public after sunset, and to pay tribute to Mr. Laferrière, who makes immense contributions to our culture,” said Claude Joli-Cœur, Government Film Commissioner and Chairperson, National Film Board of Canada.

“Behind the words and images, there is a story. The course of a singular life. Unique. From the Haitian countryside to the hallowed halls of the Académie française, to the famous bench in Carré Saint-Louis, Dany Laferrière’s story fascinates me, inspires me,” said Félix Dagenais, curator and creative director.

L’Exil vaut le voyage
August 20 to November 1, 2020
On the façade of UQAM’s Pavillon Président-Kennedy
Wednesday to Sunday, sunset to 11 p.m.

ABOUT THE NATIONAL FILM BOARD OF CANADA (NFB)

The National Film Board of Canada (NFB) produces groundbreaking animation at its studios in Montreal and at NFB centres across Canada, as well as via international co-productions with many of the world’s leading auteur animators. The NFB is a leader in developing new approaches to stereoscopic 3D animation and animated content for new platforms. The NFB has created over 13,000 productions and won over 7,000 awards, with NFB animation accounting for 7 of the NFB’s 12 Oscars, as well as 6 grand prizes at France’s Annecy International Animated Film Festival, 4 Palmes d’Or at the Cannes Film Festival and 2 Golden Bears at Berlinale. To access this award-winning content and discover the work of NFB animators, visit NFB.ca, download its apps for mobile devices or visit NFB Pause.