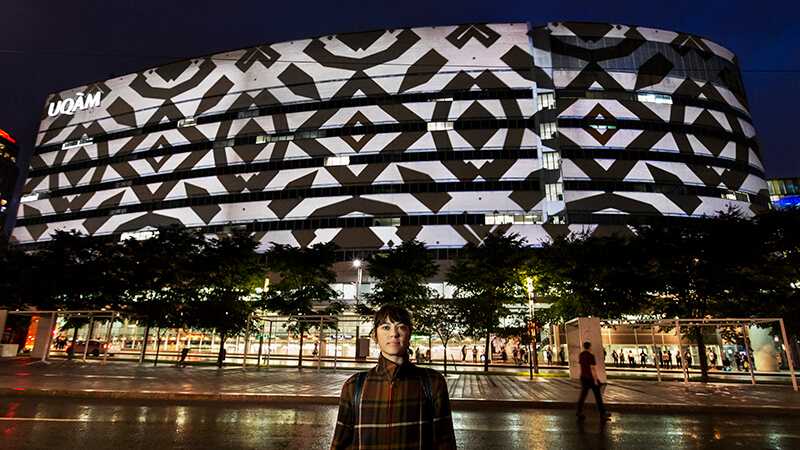 Montreal, September 24, 2019 - The Quartier des Spectacles Partnership is pleased to have invited Caroline Monnet to create Mooniyang, her first solo architectural projection in the Quartier des Spectacles. The animated work will be presented in collaboration with the Festival du nouveau cinéma (FNC) on UQAM's Pavillon Président-Kennedy, from October 9 to November 24, 2019. Mooniyang is part of FNC Explore, the festival's new media section, which includes more than 30 world-class works, all on display for free.

Mooniyang (Montreal in the Anishinaabemowin language) is a conceptual exploration of the marks left on the Montreal landscape over the years. Using geometric shapes inspired by traditional Anishinaabe patterns, the territory is divided, reassembled and fragmented in a dynamic series of motions. The ages-old patterns are related to long-suppressed Indigenous knowledge. They represent unknown lands, invisible boundaries and transitional spaces

This animated work is a continuation of Caroline Monnet's recent work, in which she explores complex issues of identity, culture and territory.

"I am extremely grateful to the Quartier des Spectacles Partnership for offering me the opportunity to present Mooniyang in the heart of Montreal, outdoors and accessible to all. I hope this new work will inspire people to live together in a spirit of mutual respect," said Caroline Monnet.

A creation by Caroline Monnet
From October 9 to November 24, 2019

Nightfall to 11 p.m.
On the façade of UQAM’s Pavillon Président-Kennedy

Caroline Monnet
Caroline Monnet is a multidisciplinary artist. Originally from the Outaouais region, she is now based in Montreal. After studying sociology and communications at the University of Ottawa and the University of Grenada (Spain), she launched a prolific film and visual arts career. Her short films have earned numerous nominations and awards at festivals around the world. In visual arts, she has exhibited her work in both solo and group shows, including at the Whitney Museum Biennale (New York), Arsenal art contemporain Montréal, the National Gallery of Canada and the Musée d’art contemporain de Montréal.

Frances Adair Mckenzie
Frances Adair Mckenzie is an interdisciplinary artist based in Montreal. Her practice includes video installations, sculpture animations and collaborative ventures. She holds a diploma in New Media from British Columbia Institute of Technology (BCIT) and a Bachelor of Fine Arts from Concordia University. Her video work has been exhibited most recently in London and Berlin with collaborative projects in Iceland and Belgium. She has also exhibited work at the Musée d’art contemporain de Montréal, Centre Clark in Montreal, the Musée d'art contemporain des Laurentides, Parisian Laundry and the Satosphère at the Society for Arts and Technology (SAT) in Montreal. Several of her animations have been commissioned by the National Film Board of Canada (NFB).

ABOUT THE FESTIVAL DU NOUVEAU CINÉMA

With its unique, offbeat approach, the FNC is a bold, innovative event that brings people together. We shine a spotlight on the world of cinema through works that deconstruct cinematic language to better reinvent it. Since 1971, our mandate has been to support and showcase major productions and provide a springboard for emerging voices in all their diversity and originality by screening over 300 films from 60 different countries. New trends, groundbreaking narrative and technological perspectives, revelations from Quebec, Canada and around the world, talks, special events and festive parties all await you at the FNC from October 9 to 20, 2019!

The Quartier des Spectacles Partnership is a non-profit organization responsible for operating and programming the Quartier’s lively public spaces, for illuminating the area through distinctive lighting design as well as for promoting this must-visit cultural destination. The Partnership is a member of several international networks, including the Connecting Cities Network and the Global Cultural Districts Network. The Partnership is supported by the Ville de Montréal.

Please include caption and credit with all photos used: Mooniyang, a creation by Caroline Monnet in the Quartier des Spectacles. Photographer's name.