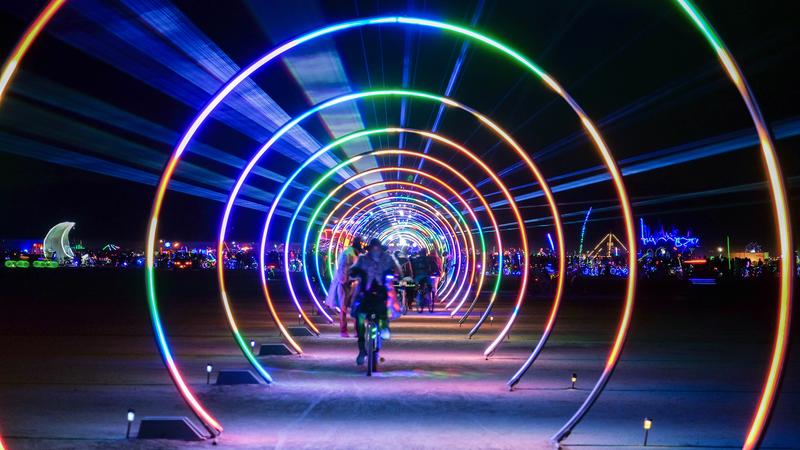 Montreal, January 11, 2022 – The 12th edition of Luminothérapie continues to delight Quartier des Spectacles visitors of all ages! An ideal activity for anyone who likes to play outdoors, enjoy the fun side of Montreal’s winter and escape to a warm and lively downtown setting, safely. Sonic Runway by Rob Jensen and Warren Trezevant and Roseaux by 1ToMn, presented in the Quartier for the first time, are being added to the event’s series of interactive and luminous installations, bringing even more winter magic to the city. Until February 27, visitors are invited to bask in the colourful lights, and have a fun and inspiring outdoor adventure.

Presented for the first time in Quebec until February 6, Sonic Runway, on a 342-foot stretch of the pedestrians-only section of Sainte-Catherine St. W., emits pulses of light in sync with the music. Along the corridor, comprising 20 arches lined with LEDs, visitors can see audio signals move at the speed of sound. With this digital work, the American creative duo of Rob Jensen and Warren Trezevant wanted to illustrate the immense gap between the speeds of sound and light. First presented in preliminary form at Burning Man in 2003, the work is the result of a spontaneous collaboration between the two versatile artists, both of whom have worked in animation for Pixar Studio. On entering the corridor, we see sound waves ripple away from us in time with the music. Sound and light accompany visitors as they walk through the work. Once they reach the end, they can stop and admire the waves moving toward them.

Secondly, from January 21 to February 27, the reeds of Roseaux will rise 16 feet into the air at the corner of Sainte-Catherine W. and Saint-Urbain streets. This creation by 1ToMn is “particip’active” and interactive, because it invites the public to activate the base of the reeds by stepping on sensors, rhythmically propelling myriad colours up the stem. The idea behind the work is to inspire users to move in unison to create a colourful, luminous world. Whether solo or in groups, participants take part in a fun and lively race aimed at illuminating Roseaux in a single, solid colour. The visual parade is punctuated by a vibrant soundscape that’s perfectly synchronized with the lights, creating an energizing sensory experience.

THE QUARTIER CONTINUES TO SHINE

Sonic Runway and Roseaux join the diverse series of six interactive and luminous works that have been lighting up the Quartier des Spectacles since December 2. The inspiring five-tonne whale of Echoes – a voice from uncharted waters will remain in Place des Festivals until February 6, and the video projection Nova will continue to illuminate the façades of the Wilder Building and UQAM’s Pavillon Président-Kennedy with captivating images of water in motion until February 16. In addition, the iconic seesaws of Impulse, currently installed in Place des Festivals, the thousands of flexible stems of Entre les rangs on the Parterre, the imposing archway tunnel of Iceberg on the Place des Arts Esplanade, and the nightly festive moment sound and light, Cœur dansant, all remain in the Quartier. The 12th edition of Luminothérapie is the perfect destination to combat the winter blues, offering Montrealers unique festive moments with family and friends until February 27, 2022.

*Please note that in order to allow visitors to respect the curfew imposed by the Government of Quebec, the opening hours have been modified. 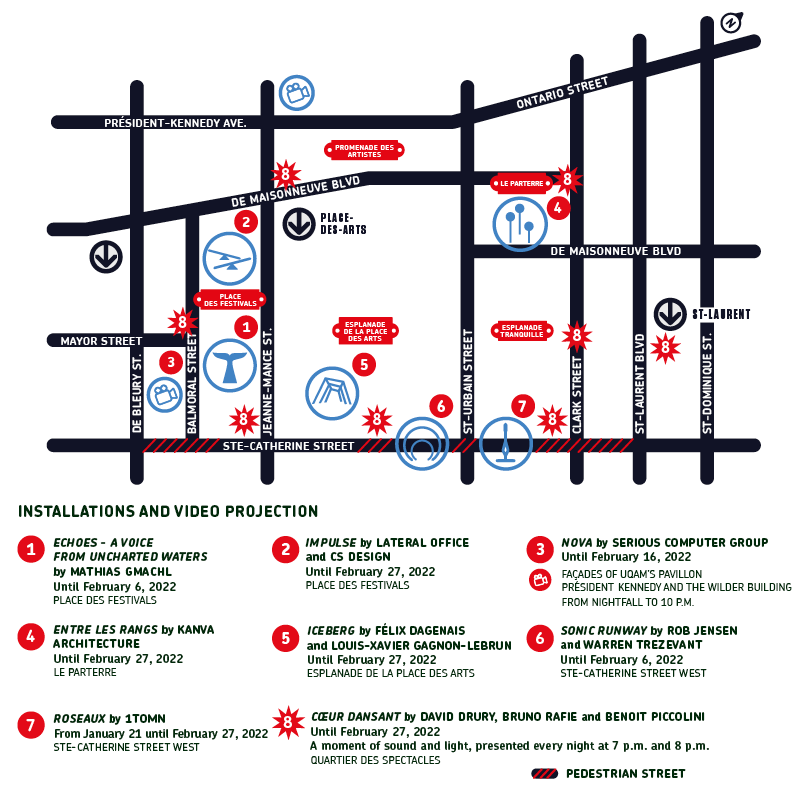 The amenities and installations that comprise Luminothérapie were designed with public health in mind, including physical distancing. These experiences allow visitors to live and relax safely in the Quartier des Spectacles. The Partnership urges all Montrealers to follow recommendations for preventing the spread of COVID-19.

GETTING TO DOWNTOWN MONTREAL   ?

Luminothérapie is Quebec’s largest competition for temporary public art installations. Each year, Luminothérapie presents an original, interactive and captivating winter experience in Montreal’s Quartier des Spectacles with a major installation in Place des Festivals. In 2020 and 2021, special editions took place in the Quartier, with a series of installations and a moment of sound and light for an extended experience. Luminothérapie seeks to spur creativity in the design of urban installations and digital art. Several cultural districts around the world have shown interest in its interactive art installations created for public spaces by local artists and creators. Since 2016, 12 works created for the Quartier des Spectacles have been exhibited on nearly 100 occasions in more than 50 cities in Canada and around the world.

To learn more about the competition, and for a list of previous years’ winners, see the Luminothérapie press kit.