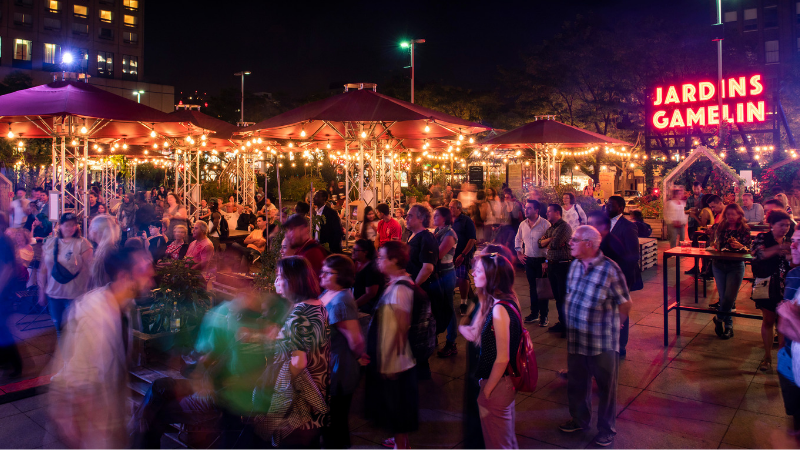 Montreal, August 8, 2019 – Summer is in full swing, and there are still two more months to enjoy the countless activities slated for Les Jardins Gamelin. Until September 29, the Jardins will be abuzz with activity, including wildly entertaining Cabaret nights, four festival events, live music, dance and cultural series for all !

Everyone will love the cabaret nights, returning for a second season. Each Tuesday in August, Montrealers are invited to enjoy a unique, incredibly entertaining night.

Cabaret Carmagnole opened the serie with a terrific evening. Next week, Montreal Pride presents Cabaret Fierté. The colourful evening will include dance, music and variety, with a large roster of LGBTQ performers. On August 20, interdisciplinary – and disciplineless – artists will take you on a kaleidoscopic surrealist journey with Cabaret DADA, a production of Festival Phénomena. Lastly, on August 27, spoken word, poetry and song fill the stage at Cabaret Debout: Actes de parole, giving voice to artists who are eager to share their vision of the world in memorable words.

The summer-festival spirit keeps coming back to Les Jardins Gamelin, with numerous musical, artistic and literary activities on the calendar.

Internationally acclaimed artist Māmā Mihirangi uses singing, dance and martial arts to convey the richness of her Maori heritage. A show with traditional and contemporary inspirations, with music by the band la Māreikura.

Corey Thomas and the Backwater Township
August 9, noon to 2 p.m.

This jazz quintet includes guitarist Olivier Turner, drummer Vitta Morales and sax players Daniel Rom and Julia Warren, along with Mi'kmaq composer and bassist Corey Thomas. Not to be missed!


For the festival’s sixth edition, graffiti artists Bgirls, EMCEE and DEEJAYS use their art to send a message of solidarity and creativity. Urban dance, spray-painting, painting and music come together in entirely novel creative performances.

Fierté Montréal Pride looks back on the Stonewall riots in New York City, which sparked the struggle for full recognition of the rights and freedoms of LGBTQ people. Stirring speeches, songs, poetry and cris de coeur will fill the air.

The city’s famous celebration of contemporary dance returns to the Jardins with inspired and playful pieces by talented local choreographers.

The FIL takes up residence in Les Jardins for the fifth straight year, with a self-serve library inspired by the micro-libraries now popping up everywhere. Meanwhile, Les Escouades littéraires (literary squads) will hold reading and writing activities, with a focus on homeless participants.

A day of writing and drawing organized by Simon Boulerice. Children ages 6 to 12 are invited to participate in writing workshops, then join a drawing battle led by Catherine Trudeau and several professional illustrators.

For the Ce soir on danse series, the DJs of Qualité de luxe (August 16) will get the crowd dancing with prime Afro-pop, soca and dancehall cuts. With a passion for hip-hop, rock and soul the Forest Boys (August 23) and the Congolese band Dear Denizen (September 6) will blur the lines separating synth-pop and indie rock.

Lastly, some great DJs will be on hand every Tuesday and Wednesday for Apéros Criollo, Mercredi de Tupi, and the Étais-tu né ? series. Better book some extra days off!

DANCE THE SUMMER AWAY

The Bals de l’été and the Salsafolie are still drawing big crowds. Every Wednesday and Saturday evening, the Jardins become a giant dance floor, with something for every taste, from salsa (Latin Groove, August 17) to swing (West Coast Swing avec Swing Connexion, September 18).

SUMMER IS FOR FUN AND GAMES

Families have until September 8 to visit the Maison jaune for the Matinées familiales avec Petits bonheurs. Every Sunday morning, kids can take part in creative workshops, listen to stories and attend musical performances.

Somewhere between théâtre d'objets and puppetry, this activity invites children to stimulate their imagination with a visit to the world of the Gamélites, the stone beings who live in the Jardins.

Last chance to play the giant werewolves game, Loups Garous de Thiercelieux organized by Randolph. Be there on August 24 for a scary good time!

Want to cultivate your green thumb? Every Sunday morning, Sentier Urbain hosts workshops for everyone who’d like to know more about gardening.

• August 11 : Edible flowers
• August 18 : All about insects and pollinators
• September 8 : Butterfly release: Migration
• September 22: : What can you compost?

Harvest time has begun! Marché solidaire offers local products at affordable prices. There’s a wide selection of fruits and vegetables, as well as bread, cheese, meat and fish – all the makings for great meals. Come back often to see what’s new. Open until fall.

In the spring of 2015, Place Émilie-Gamelin showed a new face to Quartier des Spectacles residents and visitors with Les Jardins Gamelin, open from May to September. A large, green and inviting civic space in the heart of downtown, Les Jardins Gamelin return every year with an original temporary layout and a versatile set of facilities. The space’s unique, accessible and human-scale programming, now in its fifth season, has become a part of daily life for residents and visitors, making Les Jardins Gamelin an inclusive gathering place in true Montreal style.

The Quartier des Spectacles Partnership, founded in 2003, is a non-profit organization with 85 members active in the district. It is responsible for managing and animating the Quartier’s public spaces, providing distinctive illumination, and promoting the Quartier as a must-visit cultural destination. The Partnership is supported by the Ville de Montréal.