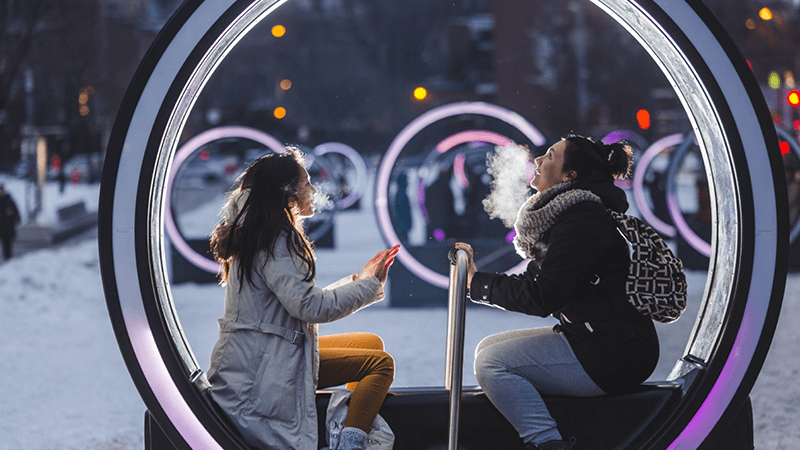 Montreal, December, 3 2020 – The Quartier des Spectacles Partnership and the Société de développement des entreprises culturelles (SODEC) are proud to announce the return of Loop to Montreal for this winter’s Luminothérapie | Cœur battant, an original participatory art walk open from December 3, 2020 to March 14, 2021. Loop is an iconic Luminothérapie work by Olivier Girouard, Jonathan Villeneuve and Ottoblix. It is the centrepiece of this winter’s expanded special edition of Luminothérapie. It will be set up in the Place des Festivals, in a new iteration that will delight visitors of all ages. The sequel celebrates Quebec literature and is produced with the support of SODEC. It was created to represent Quebec at the 2021 Frankfurt Book Fair, where Canada will be the Guest of Honour. Every evening after sunset, the façade of UQÀM’s Pavillon Président-Kennedy will light up with the companion video projection Index, by Ottoblix.

Four years after its premiere in Montreal, which was followed by several stops around the world, Loop has an all-new set of visuals, which will debut this winter in the Quartier des Spectacles. The music-and-light installation comprises 12 giant zoetropes – an optical toy that was a precursor to animated film – in which visitors are invited to sit. When they activate the mechanism, they will see an awe-inspiring flipbook-style animation of images by Quebec illustrators, inspired by 12 works by some of our greatest authors. The experience is complemented by a new soundtrack for each zoetrope, inspired by the theme of the animation. “SODEC is proud to support the Loop project, which celebrates our literature and culture using local expertise and talent in digital arts. Audiences will discover the grand premiere of a work that pairs 12 talented illustrators with great Québécois literary works. Loop will also showcase our literature at ARTS+, the digital section of the 2021 Frankfurt Book Fair,” said Louise Lantagne, President and CEO of SODEC.

The 24 authors and illustrators involved include Anaïs Barbeau-Lavalette, whose La femme qui fuit is illustrated by Estelle Frenette-Vallières, Bondrée by Andrée A. Michaud illustrated by Urban9 and Tous des oiseaux by Wajdi Mouawad illustrated by Jacques Goldstyn. The children’s book Au-delà de la forêt, co-written by Nadine Robert and Gérard Dubois, is illustrated by Gérard Dubois, Émilie Turgeon’s novel Le silence est d’or is brought to the zoetrope by Pinabel, and Je suis un écrivain japonais by Dany Laferrière is illustrated by Mathieu Potvin. The late Gabrielle Roy is also featured, with her classic_ Bonheur d’occasion (The Tin Flute) illustrated by the talented Todd Stewart. Amélie Tourangeau made illustrations for _Six degrés de liberté by Nicolas Dickner, while Éléonore Goldberg’s drawings bring Catherine Mavrikakis’ novel Le ciel de Bay City to life. Joséphine Bacon’s poem Uiesh – Quelque part is rendered in visual form by Marie-Hélène Turcotte. Le facteur de l’espace by Guillaume Perreault is illustrated by Camille Pomerlo, and Fannie Cloutier by Stéphanie Lapointe is illustrated by Marianne Ferrer. “Since 2016, Loop has lit up the faces of many people around the world. We are very excited to present the work in Montreal once again. Taking inspiration from Quebec’s literature, this time the 12 giant zoetropes will present 12 favourite literary works as interpreted by talented illustrators. I have no doubt viewers will be transported by these colourful stories,” said Loop’s designer, Olivier Girouard.

Complementing the playful Loop experience is a video projection titled Index, to be presented on the façade of UQÀM’s Pavillon Président-Kennedy. The original work, by Ottoblix, salutes the literary world with a series of 12 colourful, joyful and festive sequences.

Loop was originally created for Luminothérapie: Quebec’s largest open competition for temporary public art installations, an initiative of the Quartier des Spectacles Partnership. The work has captivated thousands of people in major cities and cultural events around the world, showcasing talented Montrealers in the process. Loop has been presented in more than 24 cities in North America and Europe since 2017. “We are very happy to have the privilege of unveiling this magnificent new iteration of Loop, the centrepiece of Luminothérapie | Cœur battant. It is such a proud representation of our artists’ immense creativity, and a fascinating journey through our literature, put into moving pictures by Quebec’s talented illustrators,” said Éric Lefebvre, Executive Director of the Quartier des Spectacles Partnership.

The amenities and installations that comprise Luminothérapie | Cœur battant were designed with public health in mind, particularly physical distancing. These experiences allow visitors to live and relax safely in the Quartier des Spectacles. The Partnership urges all Montrealers to follow recommendations for preventing the spread of COVID-19.

A co-production of EKUMEN and the Quartier des Spectacles Partnership

The Quebec book illustration project is a SODEC initiative. It was conceived to represent Quebec at the Frankfurt Book Fair in 2021.

HOW TO GET TO DOWNTOWN MONTREAL?

Luminothérapie is Quebec’s largest competition for temporary public art installations. Each year, Luminothérapie presents an original, interactive and captivating winter experience in Montreal’s Quartier des Spectacles with a major installation in Place des Festivals. Luminothérapie seeks to spur creativity in the design of urban installations and digital art. Several cultural districts around the world have shown interest in its interactive art installations created for public spaces by local artists and creators. Since 2016, 12 works created for the Quartier des Spectacles have been exhibited on nearly 100 occasions in more than 50 cities in Canada and around the world.

To learn more about the competition, and for a list of previous years’ winners, see the Luminothérapie press kit.

SODEC is mandated to promote and support the development of Québec cultural businesses, both here at home and around the world, in the fields of film and television production, books and publishing, fine arts and crafts, as well as music and variety. SODEC is also mandated to protect and promote a heritage property portfolio of 32 buildings reflecting the Québec identity.