KM³ : FROM OCTOBER 5 TO 15, HUMANORIUM – THE STRANGE CARNIVAL ARRIVES AT LES JARDINS GAMELIN 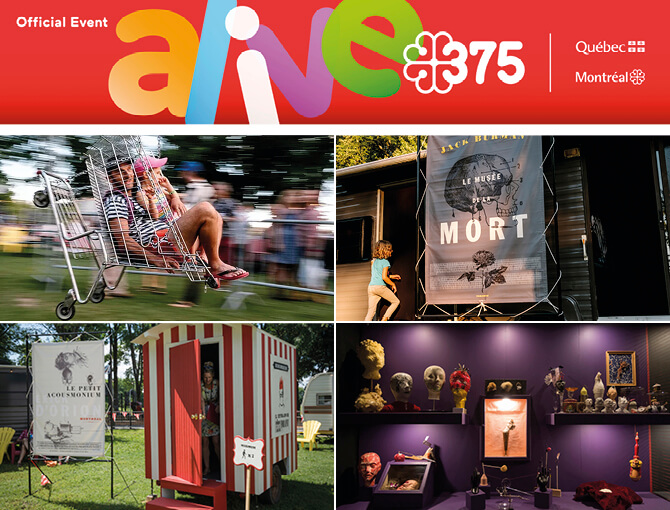 Montreal, September 28, 2017 – HUMANORIUM – The strange carnival created by EXMURO arts publics, will take over Les Jardins Gamelin from October 5 to 15. The festive gathering is part of the participatory public art event KM3 (kilomètre cube), an initiative of the Quartier des Spectacles Partnership and part of the official programming of Montreal’s 375th anniversary. Visitors will discover a mysterious and weird carnival concocted by contemporary artists – a unique artistic and sensory experience.

With its tents, trailers, carousel and shooting gallery, HUMANORIUM is reminiscent of 19th and 20th century fairs, but in this case the attractions were created by artists. After a spin on the shopping-cart carousel, explore cabinets of curiosities brimming with collections, sculptures, photographs and soundscapes. And don’t miss the terrifying Musée de la mort (museum of death). Part travelling exhibition and part freak show, this is a carnival you won’t want to miss!

This travelling art exhibition features pieces by a dozen visual and multidisciplinary artists who use their work to question the nature and meaning of existence as a human being. Before stopping in several Canadian cities, the bizarre carnival that is HUMANORIUM, curated by Ève Cadieux and Vincent Roy, will arrive in Montreal with three new works joining the show. The project was first presented in 2016 at the Parc du Musée in Quebec City.

The snack bar in Les Jardins Gamelin will serve up classic carnival fare. The band Oktopus will kick off HUMANORIUM at the official opening on October 5 at 5:30 p.m. The four-piece band plays instrumentals with Eastern European roots, transformed through wild arrangements. They will play Les Jardins Gamelin weekdays at 5 and 7 p.m. and weekends at 2 to 4 p.m. DJ Touski will also be performing at the opening as well as providing a soundtrack inspired by Balkan music, which can be heard during HUMANORIUM.

EXMURO is a non-profit organization whose mandate is to exhibit and promote multidisciplinary art projects in urban public spaces. The Quebec City-based organization was founded by Vincent Roy in 2007. Over the last ten years, EXMURO has conceived and coordinated numerous art projects in cities in Quebec and elsewhere. Its projects include Passages Insolites, an annual large-scale public art event held in Quebec City, featuring a dozen artists and architecture collectives. EXMURO’s initiatives help reaffirm art’s essential contribution to society.

KM3 (kilomètre cube) opens new perspectives on the city through today’s most innovative public art. From the Quartier des Spectacles’ iconic squares to some of its most unusual places, this art walk features more than 20 immersive, participatory and contemplative public artworks that renew our vision of the urban fabric and the people we share it with.

The Society for the Celebration of Montréal’s 375th Anniversary is a non-profit organization whose mission is to organize the celebrations and socioeconomic contributions that will mark Montréal’s 375th anniversary in 2017. With a focus on promoting Montréal expertise, it acts as a catalyst for local forces in carrying out its mandate: to mobilize the community, implement a funding strategy, rigorously manage public funds, develop quality programming and ensure the visibility of the celebrations.

The Society benefits from the support of the Ville de Montréal, the Québec government, the Canada government and private funding from 12 Great Montrealers. For more information, see 375mtl.com

You can find all our press releases and additional pictures and videos in our virtual press room.

To learn more about the contribution of the Québec government to Montréal’s 375th Anniversary celebrations, click here.