This summer at les Jardins Gamelin: festivals, 15 activity series and an oasis of greenery! 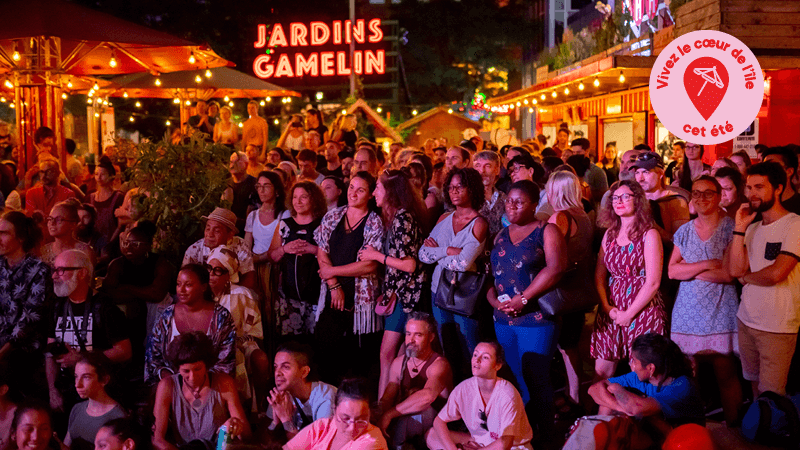 Montreal, May 26, 2022 – The eighth season of Les Jardins Gamelin opens this evening and will continue until October 2, welcoming visitors to a warm, diverse and festive living environment in the Quartier des Spectacles! Expect a summer packed with activities thanks to a free program for all, 7 days a week, in a Place Émilie-Gamelin featuring a colourful design by EN TEMPS ET LIEU and lush gardens by Sentier Urbain. The wonderfully animated and highly social space that is Les Jardins Gamelin is part of the Moments du cœur de l’île initiative.

Les Jardins Gamelin will present 15 diverse activity series taking place each day, from noon to evening, with dancing, concerts, urban agriculture workshops, music of every genre and a host of fun activities for both adults and children. Several festivals will also use the site as a venue over the course of the season. And everyone can enjoy the all-new menu created by Les Survenants, in charge of the snack bar’s kitchen and taps.

Year after year, event partners and artists remain loyal to Les Jardins Gamelin, enriching the space’s summer programming. In the first month, Journée du jeu (games day) on June 19 and the Carnaval des enfants (children’s carnival) on June 25 will host playful and entertaining activities for kids and adults. The magic of MONTRÉAL COMPLÈTEMENT CiRQUE will happen July 7 to 17, while Cirque Éloize’s artists will present free circus acts, twice a day (except on Monday) on one of the 3GÉANTS presented by Ivanhoé Cambridge. A few days later, the Haïti en Folie festival will bring its lively music to the Jardins stage. Fierté Montréal Pride, the Montreal First Peoples’ Festival and the Friends For Life Bike Rally are among the activities scheduled for August, while Quartiers Danses and POP Montréal will close the season in September.

SINGING IN THE JARDINS

Several musical series will inspire visitors to sing at the top of their lungs! For that, nothing beats Monday evening Karaoke or the Planète Gamelin series, which presents music and sounds from all around the globe every Thursday evening starting at 6 p.m (Bantü Salsa, June 9).

Anyone in the mood to discover new music should check out the Midis à la carte series on Thursdays and Fridays, with up-and-coming artists and musicians providing the soundtrack for students’ and workers’ lunch hours on a succession of monthly themes: franco, jazz, classical, pop and Indigenous music (Geneviève Racette, May 27 and The Liquor Store, June 2).

New this year, the Ligue d’improvisation musicale de Montréal (LIMM) will move its popular Café Campus evenings to the Jardins for a new series, La LIMM s’invite à Gamelin, with a three-match musical improvisation tournament in June, July and September. Lastly, whenever there isn’t live music, background music featuring Francophone and global music will be provided by Radio-Canada OHdio.

DANCING IN THE JARDINS

Those who enjoy dancing won’t be disappointed this season! Every Saturday, the ever-popular Soirées Salsafolie showcase Latin culture, while every Wednesday the Bals de l’été keep the dancefloor busy with genres from swing to kizomba to bachata. There will be professional instructors on hand for both weekly dance evenings to help dancers perfect their moves.

The Jardins Gamelin team has also assembled music series that will get the crowd moving with Ce soir on danse !, live concerts and DJs every Friday to start the weekend on the right foot (Qualité de luxe, June 3), and Donne-moi du funk !, with infectious funk beats on the turntables each Tuesday (Voyage Funktastique, May 31). On Wednesdays at lunchtime, enjoy a tropical getaway on the terrasse with the Jardin tropical series, with DJs spinning African, Caribbean and Latin tunes.

THE JARDINS: A PLACE FOR LEARNING

The whole family is invited to enjoy a moment of sharing and wonder on Sunday mornings, thanks to the return of the Matinées familiales avec Petits bonheurs. Each week in July and August, a host of art activities and stimulating shows will give kids from 0 to 10 years of age the chance to fully express their creativity.

Meanwhile, Sentier Urbain will share its urban agriculture expertise with residents and visitors. Meet the organization’s gardening instructors during the Côté Jardins – Causerie series on Tuesdays at 5 p.m., where guest experts will discuss current issues with the public, and Côté Jardins – Atelier on Sundays at 11 a.m., a workshop series for all ages in which participants will be able to get their hands dirty as they discover the joys of horticulture. In addition, there will be four of the popular butterfly releases this summer – a fantastic family activity!

Open-air exhibitions will offer visitors more opportunities to broaden their horizons. Croisement de rue, presented by the Société de développement social (SDS), takes a sympathetic look at homeless persons through portraits and testimonials collected by social worker and photographer Céline Côté. Starting in August, BAnQ will present a new exhibition in the Jardins; details will be announced soon.

Also worth mentioning are the Club de jeux (game club) and trivia night, both of which will give visitors’ minds a good workout as part of the T’as de beaux jeux series hosted by Randolph on Sundays at 2 p.m. At all times, anyone can enjoy a friendly match with the giant games.

Since 2015, Les Jardins Gamelin has been a living space for all communities. With the aim of offering assistance to people in precarious situations, well-established community organizations joined the mission by providing essential support and resources. Invaluable work is being done by Société de développement social, Cactus, Spectre de rue and Présence Compassion, as well as the returning E=MC2 project led by the SPVM, which offers the square’s users support from specialized workers.

“The Jardins Gamelin initiative is a model of peaceful coexistence between nature and the city, and also between humans of every background, culture and community. Over the last eight years, the team and our partners have done remarkable work for our communities and have ensured that everyone feels welcome. The Quartier des Spectacles Partnership is very proud to be able to lead this mission with valuable collaborators, including the borough of Ville-Marie,” said Monique Simard, chair of the Quartier des Spectacles Partnership’s board of directors.

LES JARDINS GAMELIN
From May 26 to October 2, 2022
Place Émilie-Gamelin, Quartier des Spectacles
Open every day until 11 p.m.
All activities are free
jardinsgamelin.com

The Quartier des Spectacles Partnership encourages Montrealers to follow public health guidelines to protect against COVID-19. You can consult the self-assessment tool to find out what to do based on your situation.

In the spring of 2015, Place Émilie-Gamelin showed a new face to Quartier des Spectacles residents and visitors with Les Jardins Gamelin, open from May to September. A large, green and inviting civic space in the heart of downtown, Les Jardins Gamelin return every year with an original temporary layout and a versatile set of facilities. The space’s unique, accessible and human-scale programming, which has now completed five seasons, has become a part of daily life for residents and visitors, making Les Jardins Gamelin an inclusive gathering place in true Montreal style. The initiative, led by the Quartier des Spectacles Partnership and thanks to the support of the borough of Ville-Marie and numerous partners, including Sentier Urbain, the Société de développement social and the SPVM.

The product of a fruitful collaboration between the Quartier des Spectacles Partnership, Montréal centre-ville, the Chamber of Commerce of Metropolitan Montreal and the Ville de Montréal, in collaboration with Tourisme Montréal, _Les moments du cœur de l’îl_e is downtown Montreal’s collaborative summer project. Bringing together the district’s cultural and economic stakeholders, the initiative encompasses a wide variety of activities presented by each partner. From Atwater to Papineau streets, between Sherbrooke St. and the St. Lawrence River, downtown is the place to go for countless cultural activities thanks to a variety of pedestrian zones, safe public spaces, spontaneous performances and an enhanced cultural offering. From June to the fall, these initiatives invite Montrealers, visitors and tourists to enjoy the best of the island outdoors.

And all the artists featured in the programming.