The return of les Jardins Gamelin: a green, lively and exciting 8th season! 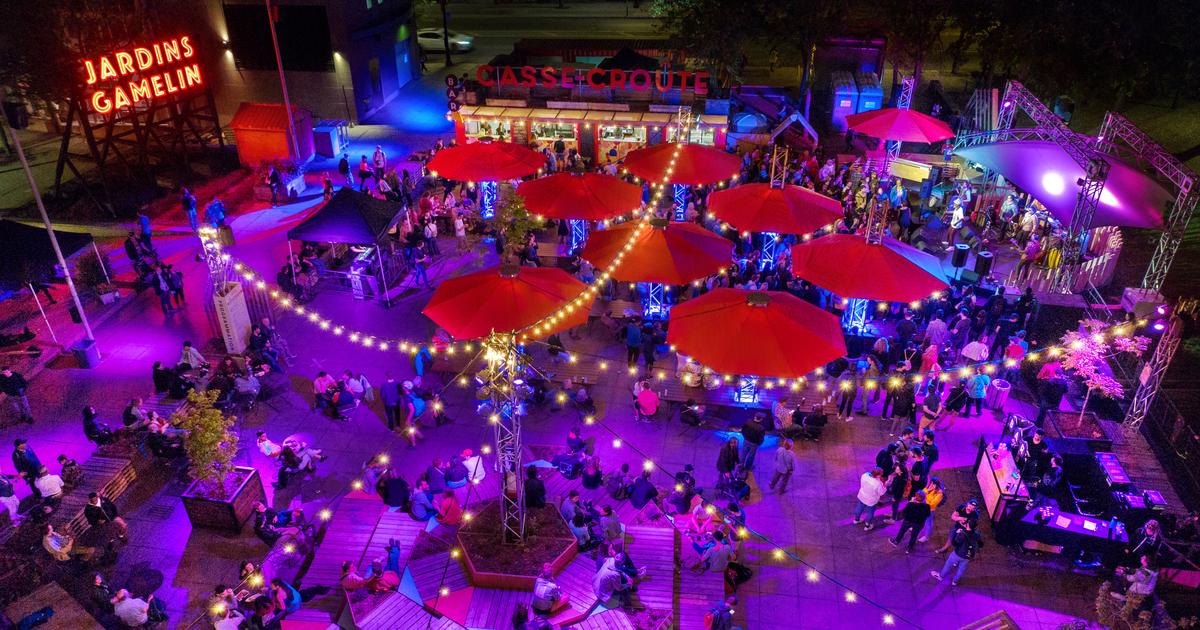 Montreal, September 29, 2022 – October 2 marks the end of the 8th edition of Les Jardins Gamelin in the Quartier des Spectacles, concluding an eagerly anticipated return after two years of scaled-back activities. The season featured 130 days of scheduled activities; 250 different activities, concerts and musical performances; and the return of the Casse-croûte managed by Les Survenants. In all, 700 artists appeared in the Jardins for a large and diverse audience of approximately 65,000 people who came together for an inspiring summer-long celebration of the city’s cultural and artistic diversity. The 2022 season of Les Jardins Gamelin once again transformed Place Émilie-Gamelin into a green, inclusive and lively space.

A STRONG DRIVE TO ENHANCE RESIDENTS’ AND VISITORS’ QUALITY OF LIFE

Since 2015, Les Jardins Gamelin have energized the eastern end of the Quartier des Spectacles by presenting daily programming and a safe setting for enjoying the summer in this important central space. This culture and design project allows everyone to embrace this central, symbolic and socially diverse block.

As partners from the project’s inception, the borough of Ville-Marie, the Service de police de la Ville de Montréal, Sentier Urbain and the Société de développement social worked with the field crews of the Quartier des Spectacles Partnership to ensure a pleasant experience for all users. With urban agriculture initiatives, efforts to promote peaceful coexistence and continuous activities and entertainment, all partners helped meet the challenges involved in maintaining and operating the space. The partners’ complementary expertise made it into a beacon that changed the image of the Quartier Latin.

“The animation of Place Émilie-Gamelin increases the vitality of this key part of the downtown core, located at the border of the Quartier Latin and the Village. The initiative attracted an exceptional number of people this year. Les Jardins Gamelin are a wonderful showcase for new talent and artists from all disciplines and cultures, right in the heart of Ville-Marie. The success of this 8th season demonstrates, once again, the importance of this unifying initiative, which is so deeply appreciated by the borough and its residents,” said Valérie Plante, mayor of Montreal.

“Les Jardins Gamelin came back livelier than ever, with nearly 30 partners and hundreds of artists occupying this re-greened square. The public took full advantage of the multipurpose space, which hosted a lively, engaging artistic program, as well as serving as the Quartier’s eastern hub for festivals and events of every size. This initiative has once again proven how essential it is to residents and the arts community alike. Hats off to everyone for their exemplary work. Long live Les Jardins Gamelin!” said Monique Simard, chair of the Quartier des Spectacles Partnership’s board of directors.

“With the pandemic, the 2020 and 2021 seasons in Les Jardins Gamelin were greatly scaled back, and we noticed ill effects from the lack of sustained programming. In 2022, once Les Jardins Gamelin resumed their usual form, life gradually returned to the square, and we once again had better conditions for our work with marginalized people. There were also fewer incidents during our intervention hours. People were calmer and the space once again became a micro-society where each person’s health and well-being mattered. To everyone’s delight!” said Janik Fortin, Project manager for external partnerships and training, Société de développement social.

EXTENSIVE PROGRAMMING AND A UNIQUE SHOWCASE FOR DIVERSITY AND NEW TALENT

From May 26 to October 2, the Jardins offered users a program of free and fun cultural activities. The musical programming put new talent – 73% of all artists – front and centre. The noontime and evening musical series Midis à la carte, Jardin tropical, Donne-moi du funk !, Planète Gamelin and Ce soir on danse ! energized the stage in Les Jardins Gamelin. Among others, visitors heard sounds from the Middle East, the Caribbean, Africa, South America, Eastern Europe and international Indigenous communities. Quebec’s francophone singers were also in the spotlight.

Each year, the public eagerly awaits the Soirées Salsafolie and Bals de l’été series, which once again transformed the Jardins into a large dance floor on 25 evenings with 28 schools and thousands of dancers taking part. On Sundays, visitors of all ages had fun with the Matinées familiales avec Petits bonheurs, with everything from percussion workshops to puppet shows, and at the Randolph games and trivia sessions on all kinds of wild themes as part of a series called T’as de beaux jeux. Each Monday and Tuesday, three featured activities got the week started on the right foot, with the return of Karaoke, Les Jardins en cabaret (with Montréal Pride, Les productions Carmagnoles, Les Filles Électriques and the Ligue d’improvisation musicale de Montréal (LIMM)) and, for the first time, La LIMM s’invite à Gamelin, a participatory show in which excellent musicians squared off in an improvisation tournament. Lastly, Sentier Urbain once again fulfilled its mission of democratizing urban agriculture for everyone who visits the site with its thematic gardens, butterfly house, workshops and talks.

AN ANTICIPATED RETURN FOR THE PARTNERS

The success of Les Jardins Gamelin is also due to the participation of 31 programming partners – organizations, festivals and competitions. They presented a wide variety of series to engage young people and showcase the best the scene has to offer, energizing audiences and getting them on the dance floor. This year also marked the return of an original Jardins Gamelin partner, MONTRÉAL COMPLÈTEMENT CiRQUE, with Le Géant du Cirque Éloize, part of the 3GÉANTS event presented by Ivanhoé Cambridge. Lastly, Radio-Canada OHdio set the musical mood all day, every day, with a varied and upbeat playlist featuring francophone music as well as selections from around the world.

“We were delighted, after two years away, to return to this amazing place that is Les Jardins Gamelin, with its unique crowd and ambiance. We were thrilled to see that Le GÉANT du Cirque Éloize attracted thousands of enthusiastic spectators every day. This collaboration with the Quartier des Spectacles Partnership is invaluable for the festival and its vitality and visibility,” said Nadine Marchand of MONTRÉAL COMPLÈTEMENT CiRQUE, a TOHU festival.

THE 2022 SEASON BY THE NUMBERS

In the spring of 2015, Place Émilie-Gamelin showed a new face to Quartier des Spectacles residents and visitors with Les Jardins Gamelin, open from May to September. A large, green and inviting civic space in the heart of downtown, Les Jardins Gamelin return every year with an original temporary layout and a versatile set of facilities. The space’s unique, accessible and human-scale programming, which has now completed five seasons, has become a part of daily life for residents and visitors, making Les Jardins Gamelin an inclusive gathering place in true Montreal style. The initiative, led by the Quartier des Spectacles Partnership and thanks to the support of the borough of Ville-Marie and numerous partners, including Sentier Urbain, the Société de développement social and the SPVM.    More information: jardinsgamelin.com

Montréal centre-ville, the Chamber of Commerce of Metropolitan Montreal and the Ville de Montréal, in collaboration with Tourisme Montréal, Les moments du cœur de l’île is downtown Montreal’s collaborative summer project. Bringing together the district’s cultural and economic stakeholders, the initiative encompasses a wide variety of activities presented by each partner. From Atwater to Papineau streets, between Sherbrooke St. and the St. Lawrence River, downtown is the place to go for countless cultural activities thanks to a variety of pedestrian zones, safe public spaces, spontaneous performances and an enhanced cultural offering. From June to the fall, these initiatives invite Montrealers, visitors and tourists to enjoy the best of the island outdoors.