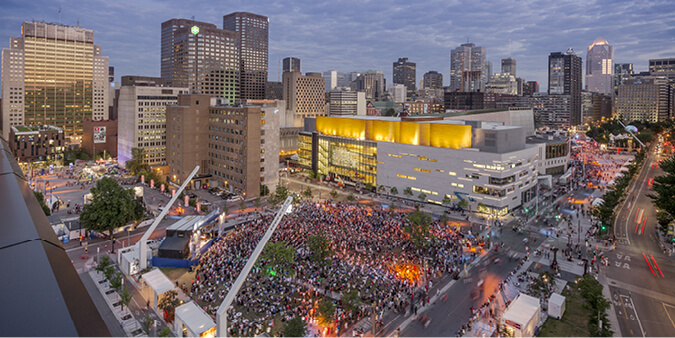 Montreal, April 12, 2017 – Today the Quartier des Spectacles Partnership and the Ville de Montréal announced the results of an update to the Study of real estate-related economic benefits of the Quartier des Spectacles. The Altus consulting firm was mandated to analyze the effects of the urban revitalization process begun in 2007 following a series of public investments. The study covers 2007 to 2019 and demonstrates, once again, the value added by culture given that the real benefits associated with the completion of 60 property development projects total $2.2 billion.

CULTURE: A CATALYST AND DRIVER OF ECONOMIC DEVELOPMENT

Since 2007, the Ville de Montréal and its various government partners have invested more than $200 million in redeveloping public spaces in the Place de Arts sector, with the aim of making the Quartier des Spectacles an essential cultural destination. This public investment helped attract 60 development projects representing $1.5 billion in construction investments and generating a property tax and school tax which could reach $449 million over the total lifespan of the projects. The new projects now under construction, with delivery scheduled in 2018 or 2019, represent more than 20 % of all economic benefits.

“Culture is not only a fantastic driver of social development, it also makes an undeniable economic contribution to Montreal, as proven by the study of economic benefits generated by real estate development in the Quartier des Spectacles. In addition to attracting hundreds of thousands of people for festivals and special events, the Quartier des Spectacles has also attracted the interest of many developers who have chosen to build major projects there. Investments in culture generate excellent returns for Montreal and its people, in terms of quality of life and economic growth, and that is why our administration will continue to steadfastly support our city’s cultural scene,” said Robert Beaudry, member of the Ville de Montréal executive committee responsible for economic and commercial development and government relations.

“The Partnership and its members have always believed that the investments by the different levels of government in developing our public spaces would deliver benefits to artists and producers, Montrealers, the Quartier’s visitors, and to the public partners. The Ville de Montréal’s decision to give the city a strong, attractive and innovative cultural district has had the desired attraction effect, and growth will continue beyond 2019, with further development in the area presenting some fine opportunities. The real estate benefits are significant, as well as being very positive for the cultural sector, which now has some major creative hubs,” said Jacques Primeau, chair of the Quartier des Spectacles Partnership’s board of directors.

Read a summary of the 2017 study (Texte available in French only).

The first iteration of the study was produced in 2014 by Groupe Altus. The current version enhances the study by including benefits generated in 2015 through 2019, extending the study period to more than a decade.