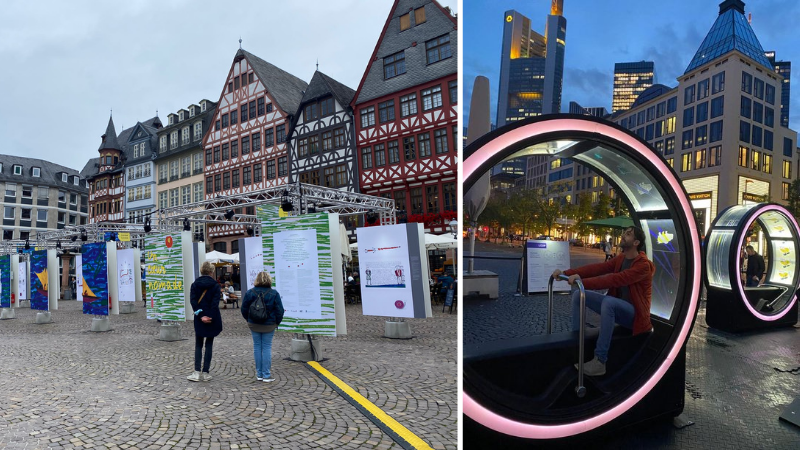 Montreal, October 21, 2021 – Works produced by the Quartier des Spectacles Partnership keep making their mark internationally: since 2016, no fewer than 14 interactive works by local creators have toured the world. They have delighted and intrigued audiences in the world’s great capitals and at major cultural events, including this year’s Frankfurt Book Fair, in Germany, where Canada is the guest of honour until October 24. The Partnership is presenting two productions on Quebec literary themes: the iconic Luminothérapie installation Loop and, touring for the first time, the exhibition Un coeur nomade, an homage to the life and work of Dany Laferrière.

This interactive sound-and-light installation, co-produced by the Quartier des Spectacles Partnership and the Ekumen creative studio, is on its latest of many stops. After being welcomed to 25 cities in North America and Europe since 2017, the work designed by Olivier Girouard, Jonathan Villeneuve and Ottoblix is now in Germany with an all-new visual concept produced with the support of SODEC and conceived specifically to represent Quebec at the 2021 Frankfurt Book Fair, as part of Canada’s presence as guest of honour.

Book fair visitors and Frankfurt residents will be able to activate the 12 giant zoetropes, based on an optical gadget that was a precursor to animation cinema. They will see animated images by Quebec illustrators inspired by 12 literary works by some of our finest authors, set to a soundtrack linked to the book in question. From December 3, 2020, to March 28, 2021, more than 130,000 people enjoyed the debut of this new iteration of the work in Montreal’s Place des Festivals during Luminothérapie | Cœur battant.

Loop is presented at the Frankfurt Book Fair’s Agora until October 24 and in the city’s Rathenauplatz until November 1. Its presentation in Germany is an initiative supported by the Gouvernement du Québec, produced in collaboration with the NODE Forum for Digital Arts and the Antenne du Québec à Berlin.

Un cœur nomade, an exhibition in tribute to Dany Laferrière

After enchanting Montrealers in the summer of 2020, Un cœur nomade is making its international debut this fall with the financial support of Global Affairs Canada and the Canada Council for the Arts. Produced by the Quartier des Spectacles Partnership in honour of the first 35 years of Dany Laferrière’s literary career and conceived by curator and creative director Félix Dagenais, the exhibition explores the author’s life in words, images and sounds. It is inspired by three graphic novels by Laferrière, a multi-talented artist whose works have been translated into numerous languages. Un cœur nomade has been installed since October 10 in Römerberg Square, in Frankfurt’s Old Town, as part of the Book Fair. The exhibition will remain open until October 24. For its Frankfurt stop, Un cœur nomade is accompanied by the video projection L’Exil vaut le voyage, co-produced by the Quartier des Spectacles Partnership and the National Film Board of Canada. The animated film, which also complemented the exhibition in Montreal, features the places and people who have marked Laferrière’s life. It will be projected on the façade of The Evangelical Academy Frankfurt until October 24.

The Frankfurt presentation of Un cœur nomade is made possible by the Embassy of Canada to Germany and by the financial support of Global Affairs Canada and the Canada Council for the Arts. It is part of the cultural program in Canada’s role as guest of honour at the Frankfurt Book Fair.

Un cœur nomade will also be presented from October 26 to November 6 at the Institut français de Tunisie in Tunis. Then, from November 3 to 13, during the Sharjah International Book Fair, in the United Arab Emirates, the public will have the chance to follow Laferrière’s life from his childhood in Haiti to his induction into the Académie Française.

“We are delighted to see two of the projects produced by the Partnership in recent years make high-profile appearances at the world’s flagship book-publishing industry event. The Partnership animates and enhances its territory, in part by commissioning original, innovative and interactive public art installations. Our ambition is also to showcase Montreal and its talents beyond our borders,” said Éric Lefebvre, executive director of the Quartier des Spectacles Partnership.

Download online.
Please include the photo caption and credits.