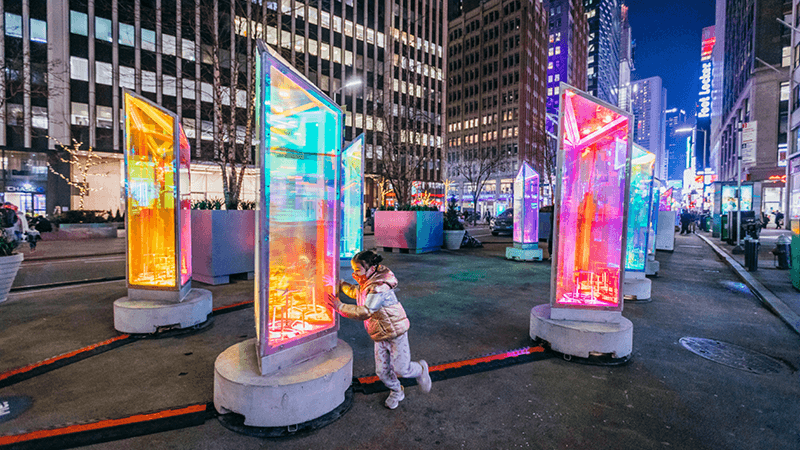 Montreal, February 4, 2021 – Prismatica, presented in New York City’s famous Garment District from January 11 to 30, was a resounding success, with strong attendance accompanied by a favourable media and public response. The works in the Quartier des Spectacles Partnership’s catalogue help cities address the significant challenges involved in organizing and animating public space – challenges that big cities have been forced to confront since the start of the pandemic.

“As our city continues to fight against this pandemic and recover, it was important for us to kick off a new, fresh year by introducing a bright and colourful public art installation to the heart of Midtown Manhattan that would inspire New Yorkers to remain hopeful and resilient. Prismatica was truly a captivating exhibition that provided a safe and socially distanced outdoor experience this winter, and delighted all who visited the Broadway plazas,” said Barbara A. Blair, President of the Garment District Alliance of New York. More than 416,000 New Yorkers.es discovered the interactive installation by RAW Design, created in collaboration with ATOMIC3 and Jean-François Piché. Prismatica is one of several public artworks produced by the Quartier des Spectacles Partnership with eventual touring factored into the design. The successful New York presentation is a testament to the growing need felt by the world’s cities and their public officials to revitalize their neighbourhoods. Many have sought the Partnership’s expertise. “With Prismatica, the Quartier des Spectacles Partnership, with the support of the Québec Government Office in New York, is showing that it can respond productively to the major challenges facing cities, given that neighbourhood and downtown revitalization strategies are shifting toward safe activities for public spaces,” said Catherine Loubier, Quebec’s Delegate General in New York.

In addition to touring the world, the Partnership’s works are bringing light to public spaces in several Quebec cities this winter. Quebec City hosted Impulse by Lateral Office and CS Design in collaboration with EGP Group, and Entre les rangs by KANVA Architecture. The presentation of the two works was part of Plein les yeux et les oreilles, an art walk lauded by Quebec City mayor Régis Labeaume for its comforting character. Other cities, including Repentigny, Toronto, Buffalo and Iowa City, will soon enjoy installations made for the Quartier des Spectacles by Quebec artists.

The Quartier des Spectacles Partnership, founded in 2003, is a non-profit organization with more than 85 members active in the district. It is responsible for animating the Quartier des Spectacles by programming cultural activities, managing and animating public spaces, providing distinctive illumination and promoting the Quartier as a must-visit cultural destination. The Partnership is supported by the Ville de Montréal.