LUMINOTHÉRAPIE UNVEILS THE ATTRACTIONS FOR ITS 13th EDITION: AN INTERACTIVE EXPERIENCE ON ICE, COLOURFUL INSTALLATIONS AND VIDEO PROJECTIONS IN CELEBRATION OF WINTER 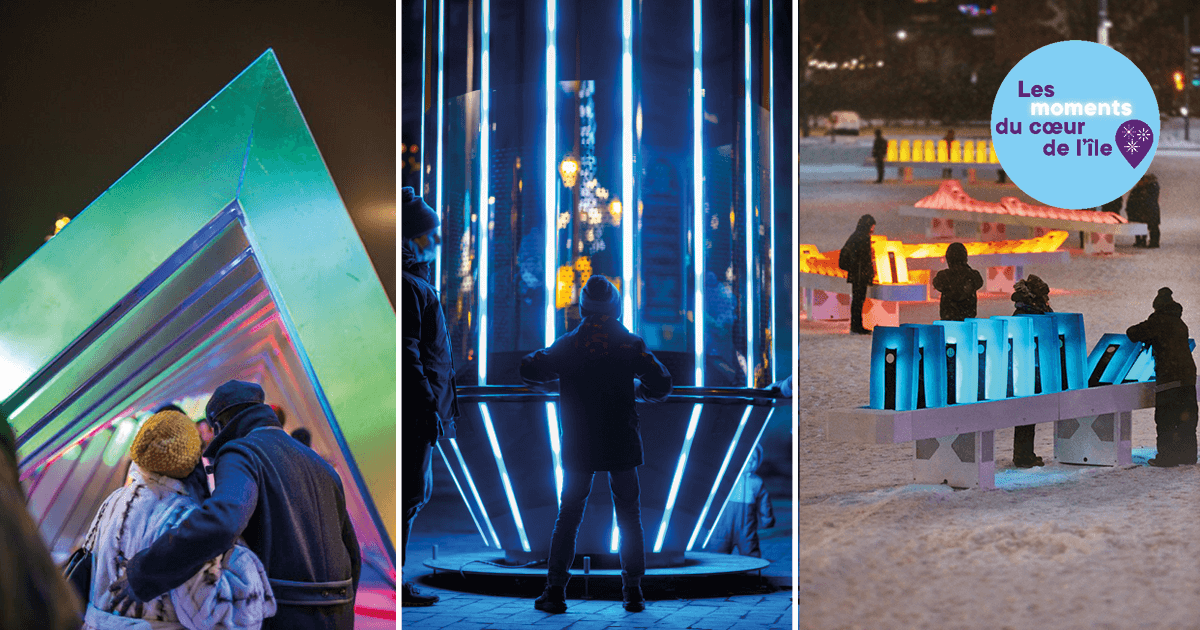 Montreal, December 1, 2022 – The Quartier des Spectacles is the place to be this winter with the 13th edition of Luminothérapie, from December 1 to March 5. This winter’s event features a series of six interactive and luminous installations, four original video projections and one interactive experience on ice. Starting at Esplanade Tranquille with the world premiere of Au bord du lac Tranquille, this year’s circuit extends all the way to Phillips Square. Thanks to Luminothérapie, downtown is festooned with the brilliant colours of luminous installations. It’s the perfect place to be amazed, get some exercise and have fun outdoors with the whole family – a unique experience of Montreal’s northern character.

The unifying theme for this edition is the beauty of biodiversity, expressed in the poetic world of the video projections, on the ice surface of the Esplanade Tranquille rink and on the Quartier’s four video projection surfaces. Throughout the circuit, which encourages people to interact, visitors of all ages are invited to bask in the bright lights and fresh air of the Quartier, an unparalleled urban winter destination.

“The installations of the 13th edition of Luminothérapie will highlight our city’s unique personality more boldly than ever: Nordic, festive, cultural and creative. Luminothérapie makes a brilliant contribution to the creation of a stimulating environment that will inspire many people to visit our downtown this winter. I invite everyone to come and get their fill of fresh air, beauty and amazement in a thoroughly delightful setting in the heart of the city,” said Valérie Plante, mayor of Montreal and of the borough of Ville-Marie.

“Luminothérapie has brightened winter in the heart of the city for 13 years – so many years of awe-inspiring art for Montrealers and visitors of all ages. Once again this year, this unique series of interactive and luminous works will bring the community together to share the joys of winter. I salute the artists and the cooperation among the various partners, and I invite you to come out and enjoy everything downtown has to offer this winter,” added the Honourable Steven Guilbeault, Member of Parliament for Laurier–Sainte-Marie and Minister of Environment and Climate Change.

“All winter, the Quartier des Spectacles remains as lively as ever and collaborates with local artists to create a unique and universally accessible urban experience. Luminothérapie and the Esplanade Tranquille rink, with its unique interactive work on ice, are the star attractions of winter in Montreal. They involve the entire Quartier des Spectacles ecosystem. We salute the excellent work of the creators who have brought a touch of art and light to our downtown,” added Monique Simard, chair of the board of directors, Quartier des Spectacles Partnership.

Luminothérapie invites the public to discover, for the very first time, the on-ice interactive experience Au bord du lac Tranquille, a creation of Mirari and Normal Studio. The marquee work for this edition is the starting point for the circuit. It reveals the richness of Nordic biodiversity through a dreamy journey into the heart of Quebec’s vast system of waterways. For 30 minutes, at 6:30 and 8:30 p.m., Montreal’s largest refrigerated outdoor rink welcomes a fascinating menagerie of aquatic fauna that follows the skaters as they move about the rink.

In the four corners of the Quartier des Spectacles, a new video projection called NØRD, by Jason Rodi of NOMADlife.tv, continues the poetic reflection on Nordic life through Quebec’s lands and species. On the façades of UQAM’s Pavillon Président-Kennedy and the WILDER Building – Espace danse, the walls outside Saint-Laurent metro station and the Grande Bibliothèque, it presents breathtaking images filmed in northern Norway and around the Arctic Circle. Among other things, the work is inspired by the poems written for the international Poets for Climate initiative of the Climate Reality Project and Agam Agenda, part of the Climate Dialogues program. Four of the poems, by Alexi Hachey Brunet, Clémence Roy Darisse and Subashini Thangadurai, are included in NØRD.

A CIRCUIT OF SOUNDS AND COLOURS

For 13 years, Luminothérapie has been presenting digital installations by local creators. On Sainte-Catherine St. W., from Phillips Square to Esplanade Tranquille, six interactive works form a special series of installations. People of all ages are invited to explore the structures and discover their secrets.

Prismaphonik by Anthony Gagnon Boisvert and William Simard, co-presented with Place des Arts, and domino effect by Ingrid Ingrid, a playful musical experience, delight the public with a symphony of colours. Nearby, a Luminothérapie classic, Iceberg by APPAREIL architecture and ATOMIC3, stands alongside Les Diamants by Alexis Laurence and Francis Laporte of Perséides studio, co-produced by the Quartier des Spectacles Partnership, the Société de Développement de l'Avenue du Mont-Royal, SDC Montréal centre-ville, Culture Trois-Rivières and the borough of Rivière-des-Prairies—Pointe-aux-Trembles. Both are co-presented by Place des Arts. These installations are fascinating representations of two natural wonders. Finally, the kaleidoscopic colours of Prismatica by RAW Design and Oscillation by The Urban Conga splash Sainte-Catherine St. with a rainbow of colours and on the parvis of St. James United Church.

Rink access is free. Skates available for rent
Schedule subject to change depending on weather conditions and event programming.
See the detailed schedule at quartierdesspectacles.com/esplanadetranquille.

GETTING TO THE QUARTIER DES SPECTACLES

To learn more about the competition and the works presented in past years, see the Luminothérapie press kit.

Les moments lumineux du cœur de l’île is downtown Montreal’s collaborative winter project. It is the result of a fruitful collaboration among the Alliance centre-ville partners: the Quartier des Spectacles Partnership, SDC Montréal centre-ville, the Chamber of Commerce of Metropolitan Montreal, Tourisme Montreal and the Ville de Montréal. The initiative is a continuation of a series of summer projects launched in 2020. The winter Moments comprise a variety of outdoor activities organized by the partners and other cultural and economic stakeholders active in the area bounded by Atwater, Sherbrooke and Papineau streets and the St. Lawrence River. The Moments include a host of original winter activities to be enjoyed outdoors in the downtown core: interactive and luminous installations and experiences, festivals and events, exceptional opportunities to meet talented local artisans, beautifully illuminated public spaces and other delightful surprises. From November to March, these initiatives have been brought together under the communication campaign Les moments du coeur de l’île and invite Montrealers, visitors and tourists to enjoy the luminous winter wonders of the heart of the island that make Montreal a unique winter destination.

The Société de la Place des Arts de Montréal is mandated with operating a performing arts venue, managing Place des Arts in Montreal and the Amphithéâtre Fernand-Lindsay in Joliette, and with establishing the artistic programming at the Maison symphonique for organizations other than the Orchestre symphonique de Montréal. These activities specifically aim to provide a place of residence for major arts organizations, increase access to the various forms of performing arts, and promote Quebec’s artistic and cultural life. Place des Arts produces, co-produces, and hosts artistic works from home and abroad, featuring both emerging artists and international stars, in collaboration with arts organizations, producers, creative artists, and the entire cultural milieu.

A co-production of ATOMIC3 and the Quartier des Spectacles Partnership, co-presented by Place des Arts