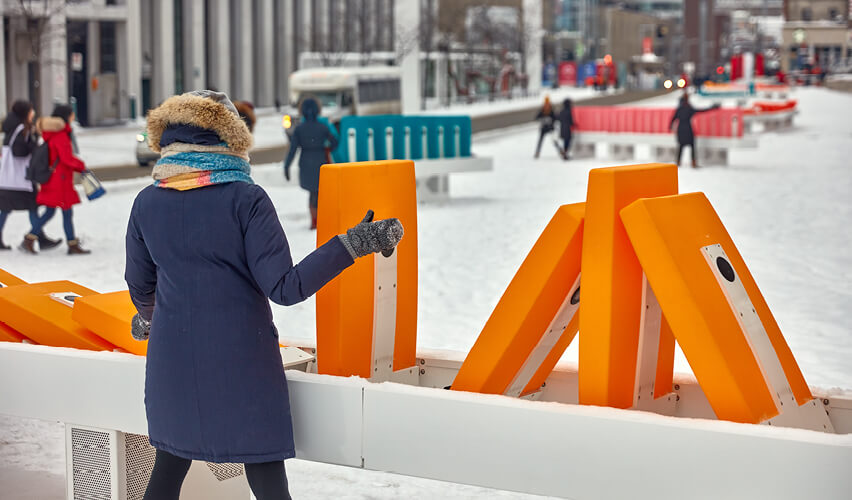 Montreal, January 22, 2019 – The 9th edition of Luminothérapie continues until January 27, 2019 in the Quartier des Spectacles. You have only a few days left to play with the 120 giant illuminated and musical dominos of domino effect by Ingrid Ingrid.

Domino effect is an interactive installation at Place des Festivals as well as an architectural projection by Nouvelle Administration on the façade of UQAM’s Pavillon Président-Kennedy. Space, sound and colour are key components of the installation, where chain reactions and original “decompositions” are triggered by sound.

The vibrant hues and bold lights of domino effect add lots of colour to Montreal’s cold winter days. In addition to having fun with the dominos at Place des Festivals, visitors will be able to warm up at the rest stop with a cup of hot chocolate from the Chocolats Favoris stand, this Saturday January 26 from noon to 4 p.m. Families are especially welcome!

THE 10TH EDITION 0F LUMINOTHÉRAPIE IS ALL ABOUT CELEBRATION

In 2019, the Luminothérapie competition will be celebrating its 10th year! To mark the anniversary, creators from a wide range of artistic disciplines have been invited to explore the theme of celebration by creating a musical, luminous and interactive installation and architectural projection, taking their inspiration from the spirit of celebration. The 10th edition will be held from November 28, 2019 to January 26, 2020.

The Quartier des Spectacles Partnership is pleased to announce the 2019-2020 winner of the Luminothérapie competition. That honour goes to the creative studio Gentilhomme, for Pop! The installation was created as a catalyst for our collective energy in a celebration of music, light and movement. The studio’s creation also pays tribute to pop culture.

The other contest finalists were:

The following people composed the jury for the competition's 2019-2020 edition:

Learn more about the competition, the finalists and the other submitted projects: quartierdesspectacles.com/competitions

For over two years, the interactive installations produced by the Quartier des Spectacles Partnership have been travelling the world to great acclaim.

Works and visited cities in 2019

Prismatica, by Raw Design, in cooperation with ATOMIC3

Iceberg, by ATOMIC3 and Appareil Architecture in cooperation with Jean-Sébastien Côté and Philippe Jean

All around the globe, Luminothérapie’s installations are known for their unbridled originality and ability to spark the interest of a broad cross-section of the public, thanks especially to their interactive design and their universal, inclusive themes. They have been seen by millions of people in North America, Europe and, for the first time ever, in China. 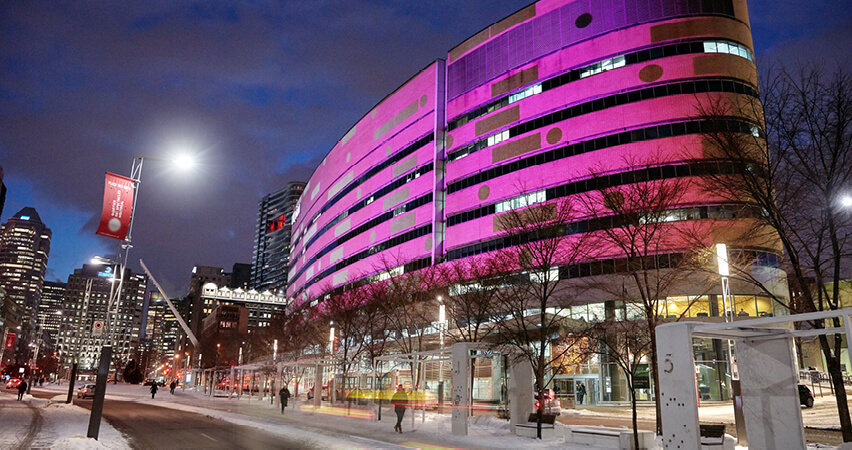 To learn more about the competition and previous years' winners, see the Luminothérapie press kit.

The Quartier des spectacles is Montreal's cultural heart, boasting North America's greatest concentration and variety of cultural venues. The district is the year-round host to countless festivals and events, many of which include free outdoor shows and activities. The Quartier hosts innovative urban installations featuring cutting-edge lighting design, immersive environments and interactive digital spaces. Year round, the Quartier presents artistic video projections on building façades. The Quartier des Spectacles is also a showcase for new multimedia technology, making Montreal a global leader in the urban exhibition of digital content.

The Quartier des spectacles Partnership, founded in 2003, is a non-profit organization with more than 80 members active in the district. It is responsible for animating the Quartier des spectacles by programming cultural activities, managing and animating public spaces, providing distinctive illumination and promoting the Quartier as a must-visit cultural destination. The Partnership is supported by the Ville de Montréal.