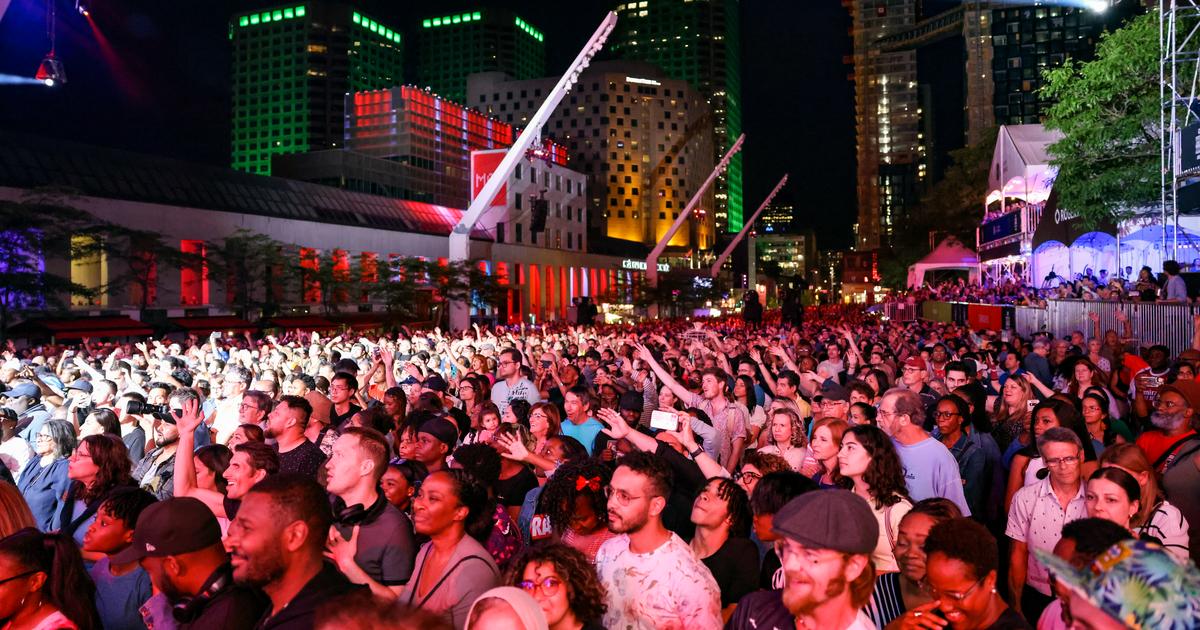 Montreal, September 29, 2022 – This summer, downtown Montreal rediscovered its dynamism and liveliness thanks to Les moments du cœur de l’île and its hundred-plus daily cultural activities, an initiative resulting from an exceptional joint effort by downtown partners and stakeholders. Led by the Quartier des Spectacles Partnership, Montréal centre-ville, the Chamber of Commerce of Metropolitan Montreal, Tourisme Montréal and the Ville de Montréal, the large-scale collaborative project Les moments du cœur de l’île brought together the strengths and creativity of the culture, tourism, business and retail communities to offer Montrealers and visitors a unique summer destination. Summer in downtown Montreal once again became an endless series of magical Moments!

With hundreds of indoor and outdoor cultural activities every day, more than 30 festivals and events, eight Oases, new public spaces, original activities, terrasses, stores and restaurants, the summer was jam-packed with culture, and the public came out by the thousands to enjoy it!

FESTIVALS AND OTHER EVENTS MAKE A GRAND RETURN

After two years of cancellations, scaled-back activities and postponements, more than 30 festivals and events returned in full force this summer to the Quartier des Spectacles and other parts of downtown with extensive and varied programs. The festivals showcased the diversity and boosted the vitality of our cultural scene, which has earned Montreal an international reputation as a city of festivals. Festivalgoers and artists enjoyed happy reunions, with participation in most events reaching 2019 levels. The events that resumed in 2022 include La Fête Nationale, the OSM Classical Spree, Festival international de Jazz de Montréal, Festival International Nuits d'Afrique and MUTEK, which redefined themselves on Esplanade Tranquille.

To entice the public to return to the festivals, a campaign called “L’été de tous les festivals” was seen all over the city starting in the spring. Funded by Tourisme Montréal’s Fonds de maintien des actifs stratégiques touristiques (FMAST) and initiated by the Forum des Festivals (an initiative of the Quartier des Spectacles Partnership and the Ville de Montréal), the campaign comprised six visuals depicting numerous artistic disciplines and festivals and highlighting local artists. FMAST also supported the production of stage equipment and urban amenities for the use of festivals and other events.

INVITING URBAN DESIGNS AND A WEALTH OF CULTURAL ACTIVITIES

Created by local designers and artists, Eight Oases provided living spaces in the heart of downtown. Numerous Montrealers embraced these urban islands, most of which were located on Sainte-Catherine Street.

All summer long in the Oases and in pedestrianized zones, at all times of day and every day of the week, the heart of the city moved to the beat of more than 1,380 performances. More than 960 local artists performed throughout the area, presenting an incredibly diverse group of theatre, dance, music, circus and comedy shows. The Oasis in Les Jardins Gamelin once again offered continuous activities for four months, while the PVM Esplanade became one of the downtown core’s essential attractions thanks to Claude Cormier’s giant sculpture, L’Anneau.

THE MOMENTS: A UNIFYING BRAND

For the second consecutive year, the Moments du cœur de l’île campaign was aligned with Tourisme Montréal’s 1001 moments campaign, which invited visitors to discover the thousand and one ways to appreciate the city through its art, culture, shows, food and activities. Downtown activities were listed on the initiative’s website (lecoeurdelile.com) and interactive map and promoted on its social media feeds. Lastly, the green Moments du cœur de l’île information booth and Tourisme Montréal’s Bonjour Montréal booth were back at the corner of Clark and Sainte-Catherine streets. Tourists and locals used them to obtain information to make the most of downtown’s many cultural offerings.

“This summer, downtown Montreal’s dynamism returned thanks in large part to successful initiatives like Les moments du cœur de l’île. This collaborative project allowed us to rediscover ourselves and share the festive city that we all love so much. Thanks to the involvement, passion and hard work of artists, professionals, merchants and restaurateurs, Les moments du cœur de l’île helped increase visits to downtown and brought much-needed business to restaurants, hotels and bars, which had a summer that met their expectations. I salute the efforts of all the partners who contributed to this successful initiative and to the revitalization of the downtown core, and I thank everyone who came out to rediscover our downtown this summer,” said Valérie Plante, mayor of Montreal.

“What a delight it was to see the Quartier des Spectacles and the rest of downtown reunite with the public and the city’s famous summertime cultural energy, the envy of so many big cities around the world. I want to acknowledge the extraordinary work of everyone involved: the festivals, cultural institutions, promoters and performance venues, creators, artists, business improvement associations, merchants, bars and restaurants. They all made important contributions to the success of this major initiative aimed at getting culture, tourism and business working in concert,” said Monique Simard, chair of the Quartier des Spectacles Partnership’s board of directors.

“The collaborative Les moments du cœur de l’île project was the catalyst and defining event of an exceptional summer! Our major events and cultural activities inspired a spectacular return of downtown visits and economic activity, both of which almost reached pre-pandemic levels. Let’s keep the effort going and make the experience just as pleasant and memorable for everyone, year round,” said Glenn Castanheira, executive director of SDC Montréal centre-ville

“As our Les moments du cœur de l’île campaign draws to a close, I salute the commitment of the Quartier des Spectacles Partnership, Montréal centre-ville, Tourisme Montréal and the Ville de Montréal to ensuring the success of this initiative. Visits to the downtown core increased significantly over the summer, including a notable increase in tourism. Our campaign highlighted the many projects and activities that were organized in Montreal this summer. The ré·CRÉATIONMTL projects supported by the Chamber drew plenty of interest. The coming months will be crucial for downtown, with hybrid work now well-established in local companies. I encourage workers to take advantage of their office days to discover all the downtown attractions that will be offered by the Chamber and its partners,” said Michel Leblanc, President and CEO of the Chamber of Commerce of Metropolitan Montréal.

“The revitalization of tourism in the city benefited greatly from the hundreds of daily activities offered through the Les moments du cœur de l’île campaign. This project is an excellent reflection of the essence of summer in Montreal: enjoying exciting artistic experiences and wandering from one festival to the next, whether on a sunny afternoon or after sunset on a warm evening. It was only natural for us to link our 1001 moments campaign to this project and its many offerings in comedy, circus, theatre and dance. We are proud to have supported this project and thrilled with this successful collaboration among key players in our industry,” said Yves Lalumière, President and CEO of Tourisme Montréal.

The product of a fruitful collaboration between the Quartier des Spectacles Partnership, Montréal centre-ville, the Chamber of Commerce of Metropolitan Montreal and the Ville de Montréal, in collaboration with Tourisme Montréal, Les moments du cœur de l’île is downtown Montreal’s collaborative summer project. Bringing together the district’s cultural and economic stakeholders, the initiative encompasses a wide variety of activities presented by each partner. From Atwater to Papineau streets, between Sherbrooke St. and the St. Lawrence River, downtown is the place to go for countless cultural activities thanks to a variety of pedestrian zones, safe public spaces, spontaneous performances and an enhanced cultural offering. From June to the fall, these initiatives invite Montrealers, visitors and tourists to enjoy the best of the island outdoors.

Montréal centre-ville is the Downtown Business Development Corporation (SDC), a non-profit organization whose mission is to contribute to the development, animation and promotion of downtown Montreal. The association has nearly 5,000 member businesses located between Atwater Avenue, Saint-Urbain Street, and between Sherbrooke and Saint-Antoine Streets. Montréal centre-ville was founded in 1999 and is the largest organization of its kind in Canada.

About the Chamber of Commerce of Metropolitan Montreal

With a network of 8,000 members, the Chamber of Commerce of Metropolitan Montreal (hereinafter, “the Chamber”) is active on two fronts: it is the voice of the city’s business community and delivers specialized services to businesses and their employees. For 200 years, it has been acting on issues that are decisive for the prosperity of the city’s businesses. With the support of the Acclr experts, the CCMM’s goal is to accelerate the creation and growth of businesses of all sizes, at home and around the world.

Tourisme Montréal is a private, non-profit organization that has been positioning Montréal as a world-class leisure and business travel destination for over 100 years. The organization leads innovative tourism strategies that have a twofold objective: to ensure visitors enjoy a quality experience and to balance economic growth with the city’s long-term interests. Tourisme Montréal plays a leading role in the management and development of Montréal’s tourism industry, and advises on issues related to the city’s economic, urban and cultural development.