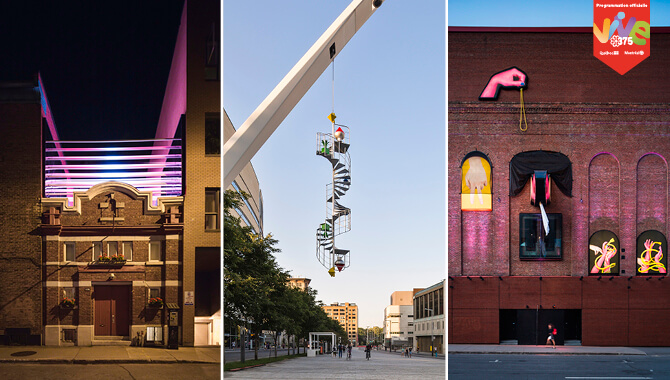 Montréal, Tuesday, September 19, 2017 – Until October 15, the Quartier des Spectacles Partnership invites Montrealers and visitors to discover a new, participatory public art walk called KM3 (pronounced kilomètre cube), part of the celebration of Montreal’s 375th anniversary. The general public, families and art aficionados will all enjoy the novel sensory and artistic experience of strolling through the Quartier des Spectacles to see and interact with the works.

WORKS with a NEIGHBOURLY THEME

KM3 comprises 22 immersive, participatory or contemplative works, most of which were designed specifically for Montreal. Eighteen were created by artists from Quebec, and four by foreign artists. The works will occupy building façades, squares, parks, sidewalks and windows throughout the Quartier des Spectacles, helping people see the city in a new light – surprising, dreamlike, reinvented.

The artists involved – more than 30 in all – come from a wide range of disciplines: visual arts, sculpture, video games, interactive design, fashion, dance and architecture. The artists were selected by curators Mélissa Mongiat and Mouna Andraos of Daily tous les jours, in collaboration with Julie Bélisle of the Musée d’art contemporain de Montréal and Pascale Daigle, the director of programming for the Quartier des Spectacles Partnership.

The curators chose the theme of neighbourliness for this first edition of KM3. For and with the public, the artists have dreamed up some new ways for everyone to live together in the city as good neighbours. Collectively, they invite us to imagine, experience and see the city differently.

WORKS THAT SUGGEST NEW WAYS TO INTERACT WITH THE CITY.

SEEING THE CITY’S SYMBOLS IN A NEW LIGHT.

WORKS THAT HELP US THE URBAN LANDSCAPE DIFFERENTLY.

LUMINOUS WORKS THAT COME TO LIFE AFTER DARK.

Complementing the art walk, a compelling series of festive events will energize the Quartier des Spectacles during KM3, including Humanorium : l’étrange fête foraine taking place from October 5 to 15, 2017, in place Émilie-Gamelin.

With its tents, trailers, carousel and shooting gallery, HUMANORIUM resembles 19th and 20th century carnivals… only this one’s attractions were created by contemporary artists: a grocery-cart carousel, cabinets of curiosities packed with assorted sculptures, photographs and soundscapes.

KM3 (kilomètre cube) opens new perspectives on the city through today’s most innovative public art. From the Quartier des Spectacles’ iconic squares to some of its most unusual places, this art walk features more than 20 immersive, participatory and contemplative public artworks that renew our vision of the urban fabric and the people we share it with.

From Ausgut 30 to October 15 octobre
In the Quartier des Spectacles in Montréal.
km3artpublic.com

The Society for the Celebration of Montréal’s 375th Anniversary is a non-profit organization whose mission is to organize the celebrations and socioeconomic contributions that will mark Montréal’s 375th anniversary in 2017. With a focus on promoting Montréal expertise, it acts as a catalyst for local forces in carrying out its mandate: to mobilize the community, implement a funding strategy, rigorously manage public funds, develop quality programming and ensure the visibility of the celebrations.

The Society benefits from the support of the Ville de Montréal, the Québec government, the Canada government and private funding from 12 Great Montrealers. For more information, see 375mtl.com

You can find all our press releases and additional pictures and videos in our virtual press room.

To learn more about the contribution of the Québec government to Montréal’s 375th Anniversary celebrations, click here.