THE KM³ PARTICIPATORY PUBLIC ART WALK IS A SUCCESS!

STILL A FEW DAYS LEFT TO ENJOY IT ! 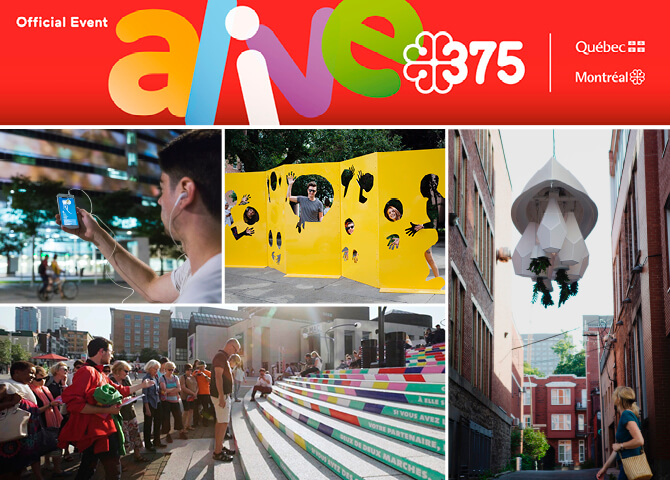 Montreal, October 12, 2017 – More than 20 participatory, interactive and contemplative works have been on display in the Quartier des Spectacles since August 30 as the KM3 public art walk. This autumn event has been warmly welcomed by the many curious, enthusiastic visitors who have explored the works. An initiative of the Quartier des Spectacles Partnership and an official part of the celebration of Montreal’s 375th anniversary, KM3 has enticed Montrealers and visitors to dream, think and interact with the city differently. The public is invited to keep on enjoying the KM3 experience until October 15.

The majority of the installations created by the 38 artists from Quebec and nine international artists are designed to be activated through public participation. This interaction brings people together, gets strangers talking and provides new ways for residents to take ownership of their city. With this year’s set of works, KM3 has succeeded in bringing more beauty into the daily lives of thousands of downtown Montreal visitors and residents.

“This inaugural edition of KM3 is not only a testament to our city’s wonderful openness to the world, it is also a reflection of values closely aligned with some of our city’s core principles: peaceful coexistence, sharing our cultural wealth, expressing and respecting our diversity, and the democratization of public art. Through this experience, Montreal has once again shown that it fully deserves its designation as a cultural metropolis and UNESCO City of Design,” said Denis Coderre, mayor of Montreal.

“Initiatives like KM3 generate interesting experiences through public art and reaffirm the Quartier des Spectacles’ position as an important showcase for temporary public art in its most diverse and innovative forms. Such an ambitious inaugural edition was made possible by the support of the ministère de la Culture et des Communications du Québec and the Ville de Montréal, and we offer them our sincerest thanks,” said Jacques Primeau, chair of the Quartier des Spectacles Partnership’s board of directors.

“With KM3, we wanted public art to take over the Quartier, with the artists drawing inspiration from the sites and creating works that fit into people’s daily lives, bring them together, and transform their relationship with the city. Nearly six weeks later, we’re thrilled with the public’s enthusiastic participation and have seen that art really can reinvent the city. We are very happy with the event’s success and extend our warmest thanks to the curators and artists for their full commitment to this bold project. Their vision and sensibilities have been essential ingredients for the event’s success,” said Pascale Daigle, director of programming for the Quartier des Spectacles Partnership.

KM3 also featured festive special events, including the memorable Banquet exquis organized by Nicolas Fonseca and Judith Portier, which opened the event on August 30. Eight respected chefs were given the challenge of improvising dishes based on a culinary cadavre exquis created by members of the public attending the massive banquet in the Place des Festivals. Later the same evening, the Place des Festivals was transformed into a giant dance floor for the Super Méga Continental by Sylvain Émard Danse, which brought together 375 dancers; thousands of spectators also joined the fun! KM3 closes with the arrival of HUMANORIUM – the strange carnival in Les Jardins Gamelin, where contemporary artists present works that will astonish, intrigue and amuse visitors until October 15. This final special event is curated by Vincent Roy and Ève Cadieux of EXMURO arts publics.

KM3 also included numerous outreach activities. More than 50 guided tours, on foot or bicycle, were offered in collaboration with Fitz & Follwell. More than 20 school groups also toured KM3. Special attention was paid to young audiences: in collaboration with Chromatic and independent facilitators, eight creative workshops invited children to experiment with artistic practices inspired by some of the works on display. To discover the art walk at a relatable scale, children from 3 to 12 could fill out the curious kids’ map with stickers while exploring the Quartier des Spectacles and interacting with the artworks.

THE WORKS OF KM3 WILL DELIGHT NEW AUDIENCES

— Côte à côte —, the work by Caroline Robert and Vincent Morisset, is being added to the Quartier des Spectacles’ permanent collection of public art; the long bench with the colourful strata will remain in Place de la Paix permanently. Inspired by the site, the work reflects the transformation of Saint-Laurent Blvd. and the brief encounters between the square’s regulars, skaters and passers by. The creative duo from Studio AATOAA are known internationally for their works, which combine interactivity, cinematic language and craftsmanship. The piece is their first public artwork.

Most of the KM3 works were created especially for the event. They will join the Quartier des Spectacles Partnership’s travelling collection, which loans public art to cities around the world. This initiative will give valuable exposure to local artists and serve as a showcase for Quebec ingenuity. It will also help forge new ties with cities that share a similar approach to interactive installations and the creation of experiences in public spaces.

Lastly, two permanent works from the municipal public art collection were unveiled during KM3 and will remain in the Quartier des Spectacles. Paquets de lumière, a sculptural triptych of dancing figures by Gilles Mihalcean, brightens the Quartier des Spectacles Parterre, while Lux Obscura by Jonathan Villeneuve illuminates Émery Street with an installation paying tribute to film noir with shadows and light projected on the ground. As winners of a competition run by the Bureau d’art public de Montréal, the works selected constitute a gift of the government of Quebec to the Ville de Montréal for the 375th anniversary of the city’s founding.

The KM3 adventure was made possible by the commitment and generosity of the artists and of curators Melissa Mongiat and Mouna Andraos of Daily tous les jours, who selected the artists in collaboration with Julie Bélisle of the Musée d’art contemporain de Montréal and Pascale Daigle, programming director for the Quartier des Spectacles Partnership, who was assisted by Marie-Joëlle Corneau, project manager for KM3. The Partnership was also able to count on contributions from some 20 partners.

The artists behind KM3 work in a wide range of disciplines, including the visual and digital arts, video games, interactive design, fashion, dance and architecture. The production of their works and the special events involved more than 600 artists and professionals, including welders, electricians, carpenters, structural engineers, programmers, sound designers, writers, designers, dancers, metalworkers, producers and more.

To see the works again and learn how they were designed and made, watch the KM3 behind-the-scenes video.

In addition to the major funding bodies, including the government of Quebec and the Ville de Montréal, the Quartier des Spectacles Partnership worked closely with the National Film Board of Canada, the Conseil des arts et des lettres du Québec and the Université du Québec à Montréal. The British Council also provided support by donating the virtual reality work A Colossal Wave to Montreal; the work was also linked to the Phi Centre. Théâtre du Nouveau Monde, the Société de transport de Montréal and Bibliothèque et Archives nationales du Québec all hosted works.

KM3 (kilomètre cube) opens new perspectives on the city through today’s most innovative public art. From the Quartier des Spectacles’ iconic squares to some of its most unusual places, this art walk features more than 20 immersive, participatory and contemplative public artworks that renew our vision of the urban fabric and the people we share it with. KM3 is an initiative of the Quartier des Spectacles Partnership and is one of the government of Quebec’s gifts to Montreal on the occasion of its 375th anniversary. The event is made possible by the financial support of, among others, the government of Quebec and the Ville de Montréal within the framework of the Entente sur le développement culturel de Montréal.

The Society for the Celebration of Montréal’s 375th Anniversary is a non-profit organization whose mission is to organize the celebrations and socioeconomic contributions that will mark Montréal’s 375th anniversary in 2017. With a focus on promoting Montréal expertise, it acts as a catalyst for local forces in carrying out its mandate: to mobilize the community, implement a funding strategy, rigorously manage public funds, develop quality programming and ensure the visibility of the celebrations. The Society benefits from the support of the Ville de Montréal, the Québec government, the Canada government and private funding from 12 Great Montrealers. For more information, see 375mtl.com. You can find all our press releases and additional pictures and videos in our virtual press room. Get all the latest news in real time on our Twitter @375Mtl. Follow us on Facebook. To learn more about the contribution of the Québec government to Montréal’s 375th Anniversary celebrations, click here.