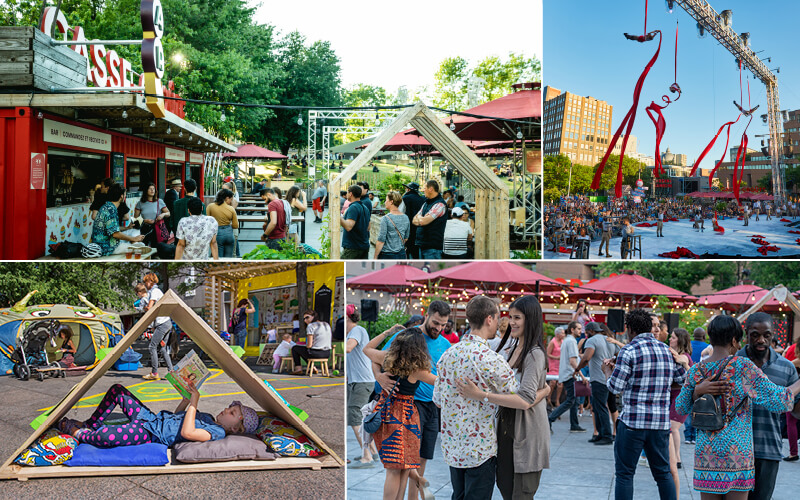 Montreal, September 25, 2019 – The fifth season of Les Jardins Gamelin will end in less than a week. The season brought fun and excitement to summer in downtown Montreal with 123 days of activities, a packed 100%-Montreal program and a large and diverse audience. In all, more than 600 artists of every kind appeared in the Jardins, celebrating our city’s cultural and artistic diversity. The 2019 season in Les Jardins Gamelin caps five years of activities for Montrealers, artists and visitors, in the heart of the Quartier des Spectacles.

Both a transitional space and a gathering place, Les Jardins Gamelin offers Montrealers a well-earned, absolutely free break from their routine, seven days a week. Whether visiting to stretch some muscles or meditate before going to the office, listen to music at lunchtime, chill out with friends or have a snack on the beautiful terrasse, there’s always something to see and do in the Jardins. There’s the Maison Jaune for the kids, a large participatory vegetable garden, the butterfly house, a market featuring local products and a unique ambiance, making the Jardins a great place to be all season.

2015-19 RECAP: COLLABORATION, THE KEY TO SUCCESS FOR LES JARDINS GAMELIN

One of the main goals for Les Jardins Gamelin was to revitalize Place Émilie-Gamelin in the Quartier des Spectacles. Originally this was a temporary animation and design project aimed, among other things, at enticing more people to return to this part of downtown and restoring the vitality of the square itself, a symbolic central space. In 2015, just a few weeks after the Jardins opened, it was clear that the people behind the project were right: Place Émilie-Gamelin was becoming a green, dynamic and inclusive place.

Five years later, the big coexistence and revitalization project that is Les Jardins Gamelin has proven successful on several fronts. In addition to becoming a community space for all, Les Jardins Gamelin is also a place for culture and education, particularly in urban agriculture. The number of visitors has grown steadily, with a notable increase in the number of families as well as people who live or work in the Quartier. Visitors feel safer than ever, while the increase in vegetation helps combat the heat-island effect.

The Jardins’ success is due largely to the exemplary spirit of collegiality and collaboration shown by a number of stakeholders, including the borough of Ville-Marie, the Montreal police service, Sentier Urbain, the Société de développement social and Jardins staff. All have contributed to social outreach and intervention at the site by sharing their expertise while tackling the challenges involved in animating the space.

MORE MONTREALERS THAN EVER IN THE JARDINS

From start to finish this season, from morning to lunchtime to cocktail hour and into the evening, tens of thousands of people visited the Jardins, appreciated its free urban green space and participated in its many activities.

Once again this year, Les Jardins Gamelin offered the public an extensive program of arts and culture, free of charge and 100% made in Montreal. Visitors had varied experiences, as inspiring and unifying as they were entertaining. Thanks to Sentier Urbain, visitors and passers-by gained plenty of new knowledge about urban agriculture and the environment, with more than 20 practical workshops and talks, and casual meetings with the gardeners in the greenhouse throughout the season.

Families and day camps came back for the fun creative activities offered at La Maison jaune and art workshops with the Matinées familiales avec Petits bonheurs. Thousands of people got together to dance under the stars in the Jardins, thanks to Les Bals de l’été and the ever-popular Soirées Salsafolie. Still others relaxed to listen to the sounds of the world with the DJs of the Apéros Criollo and Ce soir on danse!

The fifth edition also reinforced the Jardins’ growing reputation as a great venue for musical discovery. Artists of every genre, as diverse as Montreal itself, appeared throughout the season for series such as Midis jazz, Midis en chanson and Mmm / Montréal musique du monde.

Each Sunday, trivia nights with Randolph brought together dozens of teams of all ages. The BANQ’s discovery workshops, offering an encounter with the heritage of Place Émilie-Gamelin and nearby neighbourhoods, inspired many people to look back on bygone days. When the weather was nice, outdoor yoga and meditation sessions in the Inspirez, expirez series were more popular than ever.

In August, the Cabaret series – four highly original and utterly unforgettable evenings – returned to the Jardins for a second season. And for the first time, the space was the venue for the large-scale multiplayer werewolves game Loups-Garous, a big success for everyone who participated.

Lastly, the Marché Solidaire was part of Les Jardins Gamelin this season with fresh local food for visitors and neighbourhood residents.

THERE ARE JUST A FEW DAYS LEFT TO ENJOY IT!

Summer isn’t quite over in Les Jardins Gamelin. You have until September 29 to enjoy the last few musical, literary and dancing activities of the season.

The POP Montréal Festival will present the bands Hanorah, Luna, Inus Aso Reggae Band, Thierry Larose and Saxsyndrum. On Saturday, September 29, everyone who loves to dance can enjoy the dance floor one last time with Salsafolie’s closing night. Fans of board games will get a last chance to enjoy the Club de jeux and Quiz Randolph. The public is also invited to take part in Les Mots parleurs, Micro ouvert, the FIL library and the escouades littéraires with the Festival international de la littérature.

These activities will cap the 5th season of Les Jardins Gamelin – five years of a noted and noteworthy presence in Place Émilie-Gamelin.

In the spring of 2015, Place Émilie-Gamelin showed a new face to Quartier des Spectacles residents and visitors with Les Jardins Gamelin, open from May to September. A large, green and inviting civic space in the heart of downtown, Les Jardins Gamelin return every year with an original temporary layout and a versatile set of facilities. The space’s unique, accessible and human-scale programming, now in its fifth season, has become a part of daily life for residents and visitors, making Les Jardins Gamelin an inclusive gathering place in true Montreal style. The initiative is produced by the Quartier des Spectacles Partnership in collaboration with Pépinière & Co, Sentier Urbain and numerous partners, with the support of the Borough of Ville-Marie.

The Quartier des Spectacles Partnership, founded in 2003, is a non-profit organization with more than 85 members active in the district. It is responsible for managing and animating the Quartier’s public spaces by programming cultural activities, providing distinctive illumination, and promoting the Quartier as a must-visit cultural destination. The Partnership is supported by the Ville de Montréal.