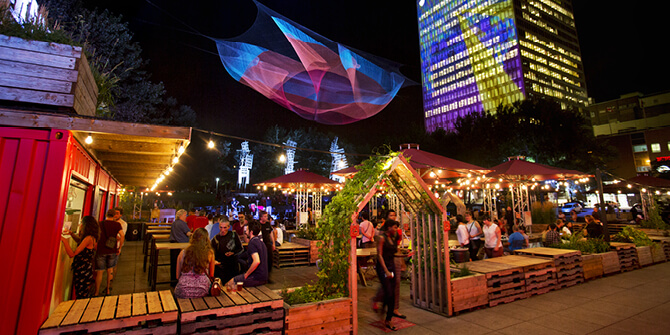 Montreal, September 1, 2016 – Summer is still going strong and Les Jardins Gamelin has plenty of nice surprises in store for Montrealers throughout September. While the space is full of lush vegetation and the harvest is plentiful, the Jardins’ evening program of song, dance and music continues all month. Regular visitors will want to keep coming out to play with family and friends, enjoy a drink or have a snack every day from 7:30 a.m. to 11 p.m.

In September, Les Jardins Gamelin will welcome Festival Quartiers Danses and the Festival international de la littérature (FIL). Among the other new features for the tail end of summer are a free lecture series, Libres cours, presented by UQAM and Nouveau Projet magazine.

This year’s musical series will also continue ­Turntable nights, Thursday of..., Miss DJ, Discovery concert, Piknic Électronik’ Choice along with family activities and urban agriculture every day in September. Enjoy Choral Monday, Morning Yoga and liven up your Saturdays with an afternoon of board games with Randolph and exhuberant evenings with Salsa folie!

The FIL is back in Les Jardins Gamelin for a second year, much to the delight of literature lovers. The heart of the Jardins will boast a beautiful self-service library, the Bibliothèque du FIL / ICI ARTV, for adults and kids alike. For ten days, festivalgoers will be able to shop for books, trade in their old books, and get plenty of suggestions from several well-informed cultural guides.

Sundays are family days in Les Jardins Gamelin! Creative workshops, youth theatre, sports, karaoke, all kinds of games: there are all kinds of fun for kids and their parents, all for free. Plan on spending the whole day!

Starting at 11 a.m., Sentier Urbain leads urban agriculture workshops for families. At 3 p.m., it’s time for Karaoké Kid, followed by karaoke for all at 4 p.m. The whole day, Urbicube, party games and ping-pong are available.

CREATIVE CARPENTRY WORKSHOP WITH MASSIVART – SEPTEMBER 4, FROM 10 A.M. TO 3 P.M.

Presented by MASSIVart, this workshop lets children sand, clean, assemble and paint a colourful collective sculpture made of wood. Visual artist Mathieu Connery will guide the children. Recommended for children age 4 and up.

BAnQ and Théâtre Galiléo present a youth show from the Lis-moi quelque chose pour voir series. Steph and Vincent have chosen passages from their favourite books. The friendly rivals will “duel” to find the most beautiful passage of all. Everybody wins! Recommended for children ages 8 to 13.

The Sac à dos organization invites children and adults to participate in “Courir pour sortir de la rue,” a 5 km run or walk set up as a scavenger hunt that starts and ends in Les Jardins Gamelin. There will also be post-race activities. This fun sports event is also a benefit aimed at raising awareness of homelessness in the borough of Ville-Marie.

Children and parents are invited to learn basic techniques in origami, the Japanese art of folding paper. As the workshop proceeds, a large structure made of everyone’s work will emerge. The workshop will be led by Miss Cloudy in collaboration with MASSIVart.

Have fun playing with this fanciful puzzle made of 27 cubes with a variety of different designs: use your imagination to build a playful world reflecting the Montreal you already know or one you would like to see. Urbicube: designed and made by Frédérique Piat Corson, Valentine Gadeau and Jeanne Salvail-Lacoste, in collaboration with UQAM, Castor et Pollux, Luwiss and the Quartier des Spectacles Partnership.

Get some friends together or join in an impromptu outdoor ping-pong match or game session. All the classics, from chess to Uno, are available for free.

MONDAY THROUGH SATURDAY, MUSIC AND DANCE EVERY LUNCHTIME AND EVENING

There’s something special about the joy of singing along with others. Come hear the Choeur de Lys choir, whose repertoire runs the gamut from classical to rock, folk and gospel (September 12), the joyful, lively and distinctive choir Les Fous de la Gamme (September 19), or immerse yourself in the vocal magic of Les Voix Ferrées (September 26).

Every Wednesday evening, artists come out to prove that all you need is a turntable to make the city’s heart beat. Speakeasy Electro Swing (September 7, 7 p.m.), Fiesta Tropicale with DJ Marc Fournier (September 14, 7 p.m.), Tupi Collective (September 21) and Ruby Jane (September 28) will provide the soundtrack for some great evenings.

If you love hearing new artists before they make it big, this is the place to be! Come see tomorrow’s stars in an intimate venue: Radiant Baby and Syzzors (September 2), Wake Island and PIF PAF (September 9), Caltâr-Bateau, third prize at the 20th Francouvertes (September 16), Monsieur Raph (September 23) and La Famille Ouellette (September 30).

SAMEDI SALSA WITH SALSA FOLIE – EVERY SATURDAY, 7 TO 11 P.M.

Experienced and novice salsa dancers are invited to cut a rug at Les Jardins every Saturday in September. The evening starts with a course where you’ll learn the basic bachata and salsa steps. Emcee Annie Salsafolie knows how to get even the most reluctant folks onto the dance floor. Be there early!

The Jardins’ regular activities continue throughout September. And they’re all free!

Monday to Friday, before and after the lunchtime concerts, Les choix de Piknic Électronik presents DJ compilations. Disco, funk, soul and house music will have the Jardins hopping. Get together to dance, hang with friends and enjoy the big terrasse.

Start your day on the right foot and energize yourself with an outdoor morning Yoga session. From 7:30 to 8:30 a.m., the Yo-Yoga school invites the experienced and the uninitiated alike to share an hour of wellbeing and discover the pleasures of a group workout. Don’t forget your yoga mat! (September 7, 14 and 21.)

Every Wednesday from noon to 2 p.m., come to the Jardins for Midi de l’Escalier, an eclectic music program presented by the cultural restaurant and bar l’Escalier. Hear The Clean Rags (September 7), Mike Gauthier (September 14), Nestor Valdez (September 21) and Delaron (September 28).

DJ Andy Williams is a huge fan of soul and jazz. He has appeared all around the world, from Paris to Cape Town, from Addis Ababa to Copenhagen. At his Soul Lunches, every Thursday in September, he shares his deep passion for music.

Let’s hear it for women who work with a needle – and turntables and crates of vinyl. Every Friday from noon to 2 p.m., the Miss DJ series invites you to groove with TIZI (September 2), Nymra & Sofisticated (September 9), OSTEO (September 16), Ruby Jane (September 23) and DJ Pedale (September 30). Sweet, sweet sounds!

Every Saturday from 1 to 6 p.m., come enjoy an afternoon of games with Randolph in the heart of Les Jardins Gamelin. Facilitators from the gaming pub will be there with games for every taste, set up on the patio tables at the Jardins snack bar. Let them guide you: they can help you pick just the right game, including some you’ve never played before!

In addition to maintaining the plots in Les Jardins Gamelin, Sentier Urbain promotes urban agriculture. Familiarize yourself with the environment, nature and their workings at workshops for the whole family, hosted by the organization every Sunday at 11 a.m.

Garden discovery tours on Tuesdays from 3 to 5 p.m. are your chance to learn about the different crops growing in Les Jardins Gamelin. Learn how they’re grown, their medicinal and culinary properties, and about the aquaponics system in the greenhouse. On Tuesday, September 20 at 4 p.m., there will be a one-time workshop on storing seeds led by specialist Lyne Bellemare.

The snack bar run by Dominic St-Laurent and his team from BallPark restaurant serve delicious breakfasts, coffee and smoothies starting at 7:30 a.m. The snack bar also proposes canteen-style lunches and dinners with a modern touch.

The reimagined snack-bar classics you’ll find on the blackboard include Sloppy Joes, burgers, and new on the menu, a Cheeseburger poutine. Plenty of other dishes await, including the lunch special: a Nordic-shrimp roll with fries and a drink for $10. Now that it’s harvest time, try the snack bar’s fresh salads inspired by the plots in Les Jardins.

Also discover their selection of cocktails created by Marc-Antoine Phénix, served until 11 p.m.

Daily from 7:30 a.m. to 11 p.m., Les Jardins Gamelin is the place to go for fun and entertainment with friends, a workout, or just to spend some time chilling out.

ABOUT the Quartier des spectacles

The Quartier des Spectacles is Montreal’s cultural heart, boasting North America’s most concentrated and diverse group of cultural venues. The district is the year-round host to countless festivals and events, many of which include free outdoor shows and activities. The Quartier hosts innovative urban installations involving cutting-edge lighting design, immersive environments or interactive digital spaces. Year round, the Quartier presents artistic video projections on several buildings. The Quartier des Spectacles is an international showcase for new multimedia technology, making Montreal a global leader in the urban exhibition of digital content. quartierdesspectacles.com