Listen to music, dance and relax in les Jardins Gamelin! 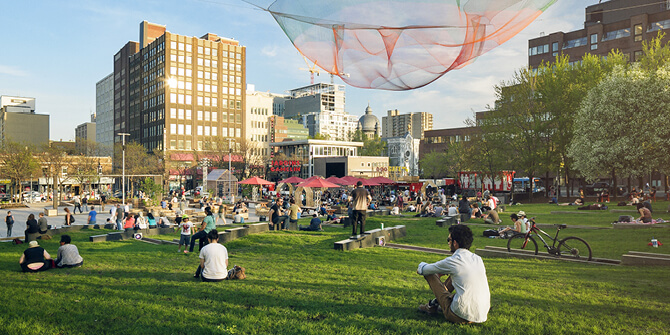 Montreal, May 13, 2016 - Les Jardins Gamelin will once again be the city’s most inviting gathering place this spring and summer. From May 12 to October 2, the green space in Place Émilie-Gamelin in the Quartier des Spectacles will host a varied line-up of activities. New additions for 2016 include family Sundays, the Miss DJ series dedicated to talented women DJs, choral music for all, carte blanche evenings featuring musical surprises from a wide variety of accomplished artists, the Concert Découverte series featuring some great up-and-coming performers, and Radio-Canada’s Cinéma d’ici aux Jardins series of outdoor screenings of Quebec-made films. All activities presented in the Jardins are free.

Once again this year, the Jardins Gamelin initiative is produced by the Quartier des Spectacles Partnership in collaboration with Pépinière & co, Sentier Urbain and numerous partners, with the financial support of the borough of Ville-Marie.

“Les Jardins Gamelin represents the intersection of culture and entertainment in an inviting and lively space designed to be enjoyed by all Montrealers. The seasonal arrangement enhances the attractiveness of the eastern part of the Quartier, which is changing more and more each year. We are very proud to present this second edition thanks, once again, to the exceptional contributions of several partners, and especially to the many Montrealers and visitors who visited last year, helping ensure the success and continuation of this major revitalization initiative,” said Jacques Primeau, chair of the Quartier des Spectacles Partnership’s board of directors.

“The re-appropriation of public spaces by all Montrealers is a priority for us. I am delighted with the results of the first season of Les Jardins Gamelin, and I congratulate all the partners on the quality of their work on this major collective project. This approach to creating something jointly, and the quality and enjoyability of the design, make Les Jardins Gamelin an example that should inspire us to beautify other public spaces in Montreal. I wish enduring success to this initiative, and to all the cultural, artisanal and artistic partners who will enliven Les Jardins Gamelin over the course of the 2016 season,” said Montreal’s Mayor, Denis Coderre.

A CHARMING DESIGN AND A DELICIOUS RESTAURANT

In the spring of 2015, Place Émilie-Gamelin was given a makeover with a temporary setup called Les Jardins Gamelin. This year we will see the return of the illuminated canopy, small round stage, snack bar located in a repurposed shipping container, and the welcoming terrasse, all surrounded by a large lawn and other vegetation. In the evening, the Jardins will be as enchanting as ever thanks to the return of 1.26, the floating sculpture by Janet Echelman, the illuminated sculpture by Melvin Charney and a variety of video projections on Place Dupuis.

For this second year, the Jardins Gamelin snack bar will serve breakfast, lunch and dinner with an updated snack bar menu by Dominic St-Laurent and his team from BallPark restaurant. Cheeseburgers, Sloppy Joes, poutine, salads and cod cakes will appeal to everyone who loves good food. The cocktail menu will feature a selection of classics and new creations by mixologist Marc-Antoine Phénix. Refreshing drinks will include artisanal, Montreal-made soft drinks by Henri Sodas, and fresh-squeezed juices. Refreshments will be served in reusable glasses bearing a Les Jardins Gamelin design (deposit applies). The snack bar is open daily from 7:30 a.m. to 11 p.m.

Until October, Montrealers will be able to follow the evolution of the gardens and vegetable plots, and enjoy the season’s harvest. The Sentier Urbain organization will once again care for garden plots in Les Jardins Gamelin; representatives will be on hand all season to discuss urban agriculture with visitors (garden discovery tours every Tuesday from 5 to 7 p.m.) and to host workshops every Sunday at 11 a.m. The tours and workshops will help visitors learn more about different plants, including how they are grown and their medicinal and culinary uses. The garden containers will include edible plants from Quebec’s agricultural heritage, an heirloom garden, plants used for making dyes, and demonstrations of aboriginal growing practices and bio-intensive growing.

NEW ON THE PROGRAM

Parents will be happy to learn that Sundays will be dedicated to families. Picnics, karaoke for kids and parents, games and participatory activities are just some of the things that will make family Sundays special and different every week. Get ready for some fun and relaxing afternoons!

Every weekend the air will ring with the sound of voices singing in harmony, thanks to a series of choirs: Montreal Gospel Choir, Chorale Chœur de Lys, Fous de la Gamme, Chœur Baobab, Voix Ferrées and the Lyric Theatre Singers. Every Monday from 7 to 8:30 p.m.

Every Thursday evening, Les jeudis de... will be an essential stop for anyone who loves a musical surprise. Mystery DJs and acoustic musicians will be given free rein to entertain you. Be ready to step out of your comfort zone with, among others, Qualité de luxe and Poirier (May 19), Fanny Bloom (June 2) and Peter Henry Phillips (June 9)! Every Thursday, 7 p.m.

If you enjoy hearing artists before they make it big, we have a concert series just for you! The intimate Concert Découverte series features up-and-coming artists and those who have won major competitions or festival awards for new artists, including Ma Première Place des Arts, La Vitrine des musiques locales métissées, Vue sur la Relève, Les Francouvertes and Les Révélations Radio-Canada. Every Friday, 7 to 9 p.m.

The DJs in the Miss DJ series will deliver memorable sights and sounds! DJs Shaydakiss, Claire, TIZI, Ruby Jane, Pédale, Osteo and Nymra & Sofisticated will prove that women can work the turntables with the best of them. Friday from noon to 2 p.m.

Several activities that were popular in 2015 are returning to spice up Les Jardins Gamelin this year. Yoga, salsa dancing and soul music fans, start marking your calendars!

Wednesday: Morning yoga. The Yo-Yoga school invites experienced and beginning yoga enthusiasts to share some moments of wellbeing and discover the joys of a group workout. Bring your own mat!

Wednesday: Singers and musicians will take to the small stage in the Jardins for the Midis de l’Escalier** (noon to 2 p.m.) while turntable nights (Soirées tourne-disque) prove that all you need is a turntable and some records to create a great atmosphere downtown.

Thursday: Soul Lunch from noon to 2 p.m. DJ Andy Williams, of The Goods Soundsystem, will set the mood in the Jardins with a spicy mix of funk, techno, soul and hip-hop that’s sure to get you up and dancing.

Saturday: Party games with Randolph Pub Ludique from 1 to 6  p.m. This season: every Saturday!

Saturday: Salsa Folie from 7 to 11 p.m. Wear your dancing shoes!

In addition to these activities, there will be time for friendly board-game sessions (games available on a self-serve basis) and Ping-Pong.

In order to craft a program for every taste, age and audience, the Quartier des Spectacles Partnership has joined forces with many partners, including several festivals. To the delight of everyone who loves spectacular entertainment, MONTRÉAL COMPLÈTEMENT CiRQUE will occupy the Jardins with a large-scale production called Fracas; Piknic Électronik will host three electrifying evenings; and the OFFTA will celebrate its 10th anniversary in the Jardins.

This year, Radio-Canada is the new content partner for Les Jardins Gamelin. On three Saturdays this summer, Radio-Canada will present an open-air film series called Cinéma d’ici aux Jardins, featuring three recent Quebec films that have won critical and popular acclaim: La Passion d’Augustine by Léa Pool, Guibord s’en va-t-en guerre by Philippe Falardeau, and Paul à Québec by François Bouvier. Plus, two artists from the Révélations Radio-Canada 2016-2017 contest will give an outdoor concert, and the ICI Musique web-radio team will provide music for the Jardins throughout the season.

May in the Jardins will be festive and artistic with, among others, the OFFTA’s 10th anniversary, Festival Accès Asie and the first Saturday dances with Salsa Folie (May 14, 21, 28).

Event and exhibition with Les Escales improbables de Montréal (May 14, 21, 28, 5 p.m.) Les Escales improbables present Synestesias d’été, a series of artistic gatherings designed especially for Les Jardins Gamelin, featuring one visual artist and one musician. The concept is simple: a live encounter between visual arts and music, resulting in a unique performance event.

Festival Accès Asie presents Vent d’Asie (May 20 to 22) Six artists, musicians, dancers and dance companies will enchant audiences in Les Jardins Gamelin with Asian music. The event will take place on Friday, May 20 from noon to 1 p.m., Saturday, May 21 from noon to 3 p.m. and Sunday, May 22 from noon to 3 p.m.

Fête mondiale du jeu (May 29, 11 a.m. to 6 p.m.) Randolph Pub Ludique presents this second annual celebration of games, which promises to be as memorable as last year’s inaugural edition. Coordinators will be on hand to help you choose the perfect game, from among many options, for you and your friends. The day is going to fly by!

OFFTA (May 30 to June 8, 6 p.m.) To celebrate its tenth anniversary, this festival of young, avant-garde creators in the living arts presents Décalogue, a series of ten works featuring artists who appeared at previous editions of the festival alongside new talents. Décalogue is presented in the public space, each night, a different artist will create a new work or adapt one from their repertoire. 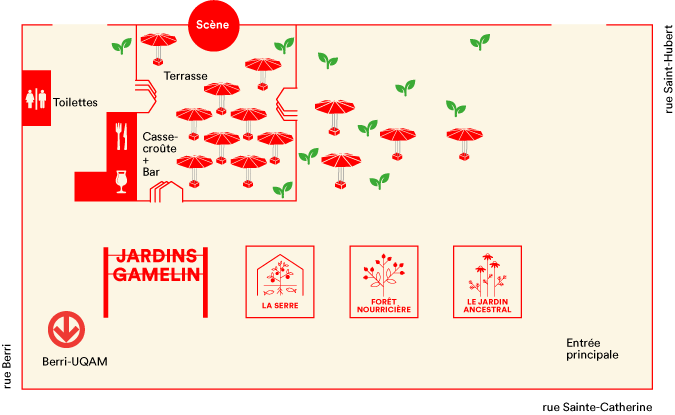 ABOUT THE Quartier des spectacles

The Quartier des Spectacles is Montreal’s cultural heart, boasting North America’s most concentrated and diverse group of cultural venues. The district is the year-round host to countless festivals and events, many of which include free outdoor shows and activities. The Quartier hosts innovative urban installations involving cutting-edge lighting design, immersive environments or interactive digital spaces. Year round, the Quartier presents artistic video projections on several buildings. The Quartier des Spectacles is an international showcase for new multimedia technology, making Montreal a global leader in the urban exhibition of digital content. For more information, visit www.quartierdesspectacles.com.