July and August in les Jardins Gamelin: A summer brimming with circus, cabaret, movies and music 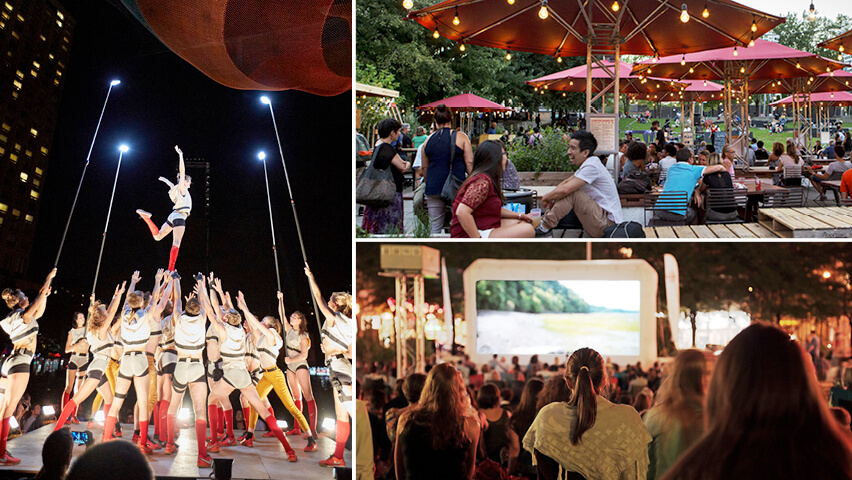 Montreal, July 4, 2018 – With summer holiday season in full swing, July and August in Les Jardins Gamelin will present a cornucopia of circus, movies, cabaret and music. There’ll be extra fun for kids, with extended hours at La Maison jaune and family mornings with Les Petits bonheurs.

For it’s 9th edition, MONTRÉAL COMPLÈTEMENT CIRQUE will stage a major performance in Les Jardins Gamelin, created and directed by Anthony Venisse. At 7:15 and 10:15 p.m. from July 5 to 15 (except July 9), the festival will present free performances of Phénix, an all-new production created especially for Les Jardins Gamelin. On a full-size circus ring – only outdoors instead of under a big top – dozens of artists will tell, in movements and lifts, the story of the circle of life. The show features acrobatics, Cyr wheels, dance, juggling and aerial feats.

OUR MOVIES IN THE JARDINS

August will also see the launch of a new series, Les Jardins en cabaret, with four dazzling Tuesdays of music, dance and laughter. On August 7, the Cabaret Carmagnole à Gamelin ! invites you to dress up for a circus-themed evening of fantasy, acrobatics, games, dance, jugglers and fire-eaters. The following Tuesday, August 14, Cabaret Fierté, invites to an irresistible evening of burlesque featuring DJ Sandy Duperval, with vogue dancers, a hilarious striptease and Mado’s Spice Drags. On August 21, Cabaret Debout: Actes de parole showcases poets and their poetry in many forms, from readings to slam to storytelling to song. Lastly, the cabaret series wraps up on August 28 with Le Corps Dada aux Jardins de Phénomena, with an exciting line-up of wonderfully odd artists.

Starting July 18, every Wednesday brings the fresh bals de l’été (summer balls), where everyone is invited to learn a new dance – bachata, kompa, tango, bzouk and more – from a professional instructor. And, each Saturday, Salsafolie brings together fans of Latin dance of every level for some of the city’s biggest open-air salsa parties. Lastly, Tuesday and Wednesday morning at 7:30, quiet reigns in the Jardins with outdoor meditation and yoga sessions. Outdoor meditation sessions, Tuesdays from 7:30 to 8:30 a.m. Outdoor yoga sessions, Wednesdays from 7:30 to 8:30 a.m. Les bals de l'été, Wednesdays from 7 to 11 p.m. Salsafolie, Saturdays from 7 to 11 p.m.

As always, the popular Maison jaune welcomes children Wednesday through Sunday from 10 a.m. to 7 p.m. – extended hours for the summer holidays. The site’s facilitators will supervise plenty of activities (hopscotch, construction games, etc.) and lead creative workshops related to life in the Jardins. Every Sunday, family morning with Petits bonheurs presents shows created especially for kids that will keep them amused and amazed, while introducing them to a variety of art forms. Lastly, children are sure to love the butterfly flights on July 22 and August 7, 14, 21 and 28, followed by a garden tour with Sentier Urbain.

Here’s a look at the Petits bonheurs family mornings:

View the full schedule of youth activities and shows. No reservations are needed, and it’s all free!

MUSIC IN LES JARDINS FROM WEDNESDAY TO FRIDAY

Wednesdays, Thursdays and Fridays, DJs and local artists of every stripe will fill the Jardins with music, in Montreal’s characteristic spirit of diversity and joie de vivre. These artists will make you dance, as well as exposing you to a wonderfully eclectic mix of catchy, upbeat tunes.

With Tupi Wednesdays, the DJs of Tupi Collective will get the party going on the ample terrasse, as DJ Mks and DJ Skambo spin the summery sounds of Brazil and other Latin American countries, with everything from samba to hip-hop, and beats old-school and new. Tupi Wednesdays, until July 25 from noon to 2 p.m. and 4:30 to 6:30 p.m., except July 4.

On Thursdays, the escales musicales showcases the best of contemporary world music made right here in Quebec. Artists such as DJ Murad and the Salamate Gnawa ensemble who will present a Moroccan-themed evening (July 19), and Shnock & Shanti (July 25), and Yao will take you across the world through music. Then, DJs will come to rhythm and warm the musical escales: DJ Canicule Tropicale (August 2-16-23-30), Tupi collective for a apseical Brazilian night with several guest artists (9 August). Also in August, many bands will share the stage : Kleztory (August 2), Tziganskaïa, and Chico y la Negra (August 16), Siffleurs de Nuit (August 23), Labess presenting a mix of flamenco and traditional music from North Africa, and followed by Carine au Micro (August 30). Les escales musicales, Thursdays from noon to 2 p.m. and 5 to 11 p.m.

Friday evenings in August are dedicated to the fourth season of a very popular new-artist showcase, the concerts découverte. On August 3, Sarah Fortin and Belle Grand Fille, winners of the 2018 edition of the Ma première Place des Arts competition, will reveal their world of song. On August 10, the Noubi Trio plays “afro-coustic” music: a spicy mix of folk, pop, reggae, funk and jazz inspired by the traditional sounds of West Africa. The following week, on August 17, Nomad’Stones play hybrid music with influences ranging from African roots to Western experimental. Lastly, on August 24, LaF will play their jazz, soul and electro-infused hip-hop, with beats drawn from boom-bap, trap and house. Les concerts découverte, Fridays, from 7 to 9 p.m.

Naturally, the Jardins’ popular family activities are back. The Randolph games club hosts fierce matches every Sunday. Then, at 7 p.m., Randolph presents the Soirées Quiz, a hilarious trivia night. Game club and trivia night presented by Randolph, Sundays from 2 to 9 p.m.

On Mondays, Art Machine with Théâtre Sainte-Catherine combines sketches, circus acts, burlesque routines and wild stories. Lastly, come meet the Gamélites, the little stone beings who have taken up residence in Les Jardins Gamelin. They take part in many of the activities happening in the Jardins, sometimes even taking a starring role. Bring the kids – they’ll love them! Art Machine with Théâtre Sainte-Catherine, Mondays from 6 to 7 p.m.

Given their downtown location, a key feature of Les Jardins Gamelin is the space’s luxuriant vegetation, including seven theme gardens designed and maintained by Sentier Urbain. The organization presents talks every Tuesday and workshops on Sundays. Come learn about agriculture and nature with, for example, permaculturist and ecological designer Wen Rolland, who will discuss forest gardening (July 24) and Pascale Priori, whose talk will focus on the use of agricultural pesticides in Quebec (July 31). The workshops cover such topics as passive solar greenhouses (“earthships”), with guest facilitator Jess Richman (July 8), aquaponics (July 15), and a session of harvesting and sampling edible plants that we all too often remove and discard – weeds (July 29)! Côté Jardins - lectures, Tuesdays from 5 to 7 p.m. Côté Jardins - workshops, Sundays from 11 a.m. to noon, both with Sentier Urbain.

Lastly, in July and August Les Jardins Gamelin will provide the setting for some large festivals and other events. In addition to MONTRÉAL COMPLÈTEMENT CIRQUE, which takes over the space from July 5 to 15. On July 21, les Jardins will host , an event that combats prejudice and exclusion through multicultural workshops and gatherings. And on July 25, 26 the Haïti en folie festival puts the crowd in touch with the Caribbean nation’s culture through its music and hottest beats. The featured artists include DJ Rock Steady and DJ Sweet Larock, and guitarist Toto Laraque.

On August 9, the Montreal First Peoples Festival presents Beatrice Deer, a singer-songwriter whose startling original sound incorporates traditional Inuit throat singing and contemporary indie rock. The next day, Ontario-based Esther Pennel will give a poignant performance grounded in her own story and her deep connections to the Earth.

BAR AND SNACK BAR
Dominic St-Laurent and his team present an exclusive menu inspired by Quebec’s fast-food classics, including happy hour specials (5 to 7 p.m.) and a children’s menu.
Restaurant and bar service open seven days a week; Monday to Friday from 11 a.m. to 11 p.m., Saturdays and Sundays from 9 a.m. to 11 p.m.