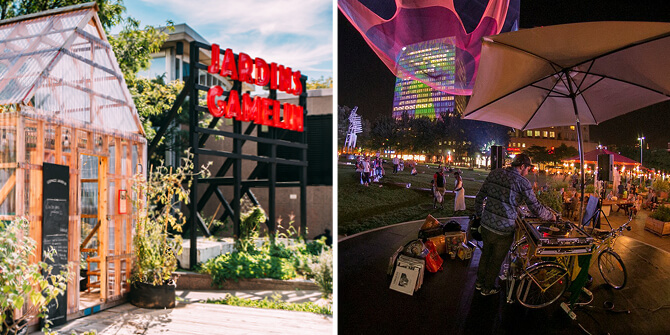 Montreal, August 3, 2016 – As the plants in Les Jardins Gamelin grow toward their peak, tourists and Montrealers are still enjoying fine summer days in the space, relaxing, having fun, enjoying a meal on the patio, and discovering all kinds of new things. In August, Les Jardins Gamelin welcomes the season’s third and final Piknic Électronik, along with a host of DJs and musicians, including Socalled, Boogat and two Révélations Radio-Canada artists. Throughout the month, family activities and urban agriculture will continue, as will Choral Monday, Morning Yoga and the not-to-be-missed Salsa folie.

From August 6 to 18, Les Jardins Gamelin will take a break from regular activities in order to prepare for Montreal Pride, which will take over Place Émilie-Gamelin from August 9 to 14.

This month Les Jardins Gamelin presents two carte-blanche evenings full of musical surprises. Don’t miss them! On August 4, the incomparable one-man-band Socalled will take the stage to play selections from his sixth album, People Watching. On August 18, the public is invited to (re)discover the electrifying Latin sounds of Boogat, a two-time Félix award winner.

For nine years now, Radio-Canada has been discovering talented young artists who could be on their way to becoming the big stars of tomorrow. Concert découverte reveals the musical world of songstress Laurence Nerbonne on August 5 and the captivating, colourful world music of Ilam on August 26.

Montréal Pride invites one and all to its annual celebration, which will close with a big show by famous Canadian drag queen Jade London on August 14 at 10:30 p.m. Earlier that day, the famous Pride parade will make its way through the streets, ending with a party in Place Émilie-Gamelin. For full Pride programming details, visit fiertemontrealpride.com

The gaming experts from Randolph will be setting up games for every taste on the tables in the Jardins’ snack bar. Let them help you choose just the right game for you! It’s a great way to enjoy the Randolph experience and discover some new pastimes in the heart of Les Jardins Gamelin.

Piknic Électronik Montréal returns to shake Les Jardins Gamelin with Body Meta at 5 p.m. and Gold Diggerz at 8 p.m. Happening just before the return to school, this is the perfect end-of-summer party for students! For 14 years, Piknic Électronik has presented the best local and international electronic music for all audiences. These evenings in Les Jardins Gamelin add a new urban twist to its tried and true approach.

Also, throughout the month, before and after concerts in the Jardins and during lunch hour, Piknic Électronik’ choices will present plenty of great DJs. Get ready for a fun mix of disco, funk, soul and house. It’s time to get together and dance, hang out with friends and enjoy the big patio.

Come enjoy a great Quebec-made movie with an open-air screening of Paul à Québec by François Bouvier. Have a seat on the lawn or on the patio and bask in the great August weather: the perfect setting to take in a film that has won audiences’ hearts. Presented by Radio-Canada in collaboration with Québec Cinéma.

FAMILY SUNDAYS – don’t miss out on the fun!

Sundays are family days in Les Jardins Gamelin! Youth theatre, dance, karaoke, games: the Jardins is the place to be for family fun, and it’s all free. Be prepared to make a full day of it.

Théâtre La Roulotte will visit Place Émilie-Gamelin for a performance of Les Déculottés, a summery play about three young heroes fighting monsters in the neighbourhood pool. Written by Lauriane Derouin and directed by Isabelle Leblanc.

The following Sunday, it’s time for a dance and percussion workshop led by choreographer Karine Cloutier and percussionists Philippe Beaudin and Marise Demers. For several years, the three artists have been visiting different parks and neighbourhoods in Montreal to give their family dance workshops. Presented in collaboration with Petits Bonheurs.


Self-serve Urbicube, ping-pong and board games

Get together with friends or join in an impromptu ping-pong match. All the classic games, from chess to uno, are available. Play with Urbicube’s giant building blocks – a puzzle consisting of 27 cubes with differing faces. Use your imagination to build a playful world inspired by a city you know or the city of your dreams.

A rich, diverse and 100% free program of regularly scheduled activities will continue in Les Jardins Gamelin throughout August.

There’s a primal pleasure to singing along with a large group of people. Experience the multicultural world of the Baobab choir (August 22), comprising 20 enthusiastic voices who will introduce you to the songs of the world. Lastly, you’re invited to sing along with Fous de la Gamme (August 29) and their choral versions of big hits from here and around the world.

Start the day the right way with an outdoor yoga session. The Yo-Yoga school invites people with all levels of experience to share an hour of wellbeing and discover the joys of a group workout. Don’t forget your yoga mat!

Every Wednesday evening, a DJ might save your life! These artists prove that all you need is a turntable to make the city’s heart beat. Discover Speakeasy Electro Swing (August 3), Tupi Collective (August 24) and DJ Pédale (August 31).

Let the detailed schedule of activities be your guide.

The container gardens, greenhouse and four theme gardens are all thriving and adding colour to the space. On the blackboard outside the greenhouse, Sentier Urbain notes which plants and flowers are ready for harvest. Come to the gardens for a little something to liven up your meals! A portion of the produce is distributed every Thursday at the “Tables des invités” run by Présence Compassion, an organization that helps homeless people.

Every Tuesday from 5 to 7 p.m., Sentier Urbain presents Découverte des Jardins, introducing visitors to the different plants in the gardens and their culinary and medicinal uses. And don’t miss the chance to hear Anny Schneider, a well-known speaker and herbalist. Her medicinal-plants workshop on Tuesday, August 30 is titled Mon jardin, ma pharmacie – Atelier sur les plantes médicinales et leurs vertus.

THE SNACK BAR, MORNING TO NIGHT


New: les Jardins Gamelin now has a bar service with alcoholic beverages, daily from 11 a.m. to 11 p.m., including a selection of cocktails created by Marc-Antoine Phénix.

The Jardins is a great place to go for a quick breakfast! Starting at 7:30 every morning, workers and residents have been taking advantage of warm summer mornings to savour a coffee, a smoothie, blueberry pancakes, granola, Saint-Viateur bagels, or the snack bar’s unique hashbrown sandwich.

The snack bar, run by Dominic St-Laurent and the team from BallPark restaurant, also serves lunch and dinner in a refreshed cantina-style setting. You’ll love the vegetarian chili nachos, burgers and other seasonal fare inspired by the gardens and the various activities going on in Les Jardins.

Daily from 7:30 a.m. to 11 p.m., Les Jardins Gamelin is the place to go for fun and entertainment with friends, a workout, or just to spend some time chilling out.

ABOUT the Quartier des spectacles

The Quartier des Spectacles is Montreal’s cultural heart, boasting North America’s most concentrated and diverse group of cultural venues. The district is the year-round host to countless festivals and events, many of which include free outdoor shows and activities. The Quartier hosts innovative urban installations involving cutting-edge lighting design, immersive environments or interactive digital spaces. Year round, the Quartier presents artistic video projections on several buildings. The Quartier des Spectacles is an international showcase for new multimedia technology, making Montreal a global leader in the urban exhibition of digital content. quartierdesspectacles.com