More ways than ever to have fun. 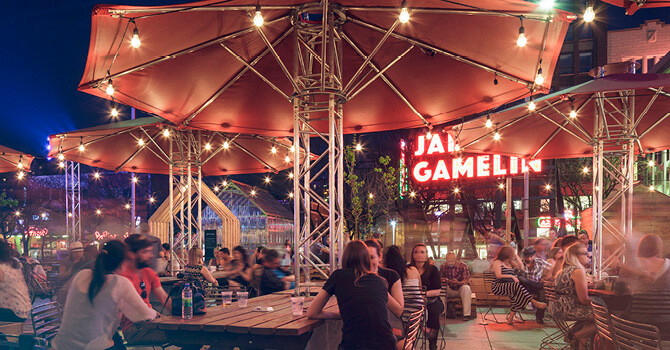 Montreal, August 22, 2017 – Who says the end of summer means the end of fun in the sun and spending quality time enjoying outdoor living? Until October 15, daily from noon until evening, Les Jardins Gamelin present a daily program of recreation, education and culture. The perfect place to treasure the last days of summer and the most glorious autumn moments.

This August and September, Les Jardins Gamelin present a rich program of activities, including cultural gatherings featuring dance, poetry, plenty of music, movies, workshops and kids’ entertainment. On top of all that, the Jardins will host two festivals – Festival Quartiers Danses and the Festival international de la littérature – and L'Épicerie Musicale presented by Les Escales Improbables de Montréal Also, the exciting new KM3 event will present Humanorium in place Émilie-Gamelin in October. There will be plenty of great activities to enjoy Montreal in all its diversity !

Musicians, singers and DJs bring joy to the Jardins

In terms of musical programming, visitors will hear voices both new and familiar. With its roster of accomplished artists, Les escales musicales takes listeners on a hot musical journey from Haiti to Mexico to Colombia, with performers such as Wesli (August 31), Cécile Doo-Kingué (September 7), Mamselle Ruiz and Roberto López (September 21). Thursdays until September 21, noon to 2 p.m. and 7 to 9 p.m.

From Wednesday to Friday, from August 25 to September 29, DJs will bring their electric vibe to Les Jardins Gamelin ! Tupi Collective will explore Brazilian beats every Wednesday afternoon. On Thursdays, from 5 to 7 p.m. and later in the evening, Canicule Tropicale – the duo of Philippe Noël and La Mano Peluda – will spin the best Latin, African and Asian music of the 50s through 80s. Finally, every Friday afternoon and evening, Speakeasy Electro Swing will use the latest technology to fill the air with the best music of the 30s.

Lastly, by popular demand, Montrealers will once again be invited to take the stage and share their vocal talent. Yes, Karaoke nights are back, every Monday from August 28 to September 25, from 6 to 9 p.m.

Dancing under the stars
Dance lovers of every level, from beginners to experts, will love the chance to practice their steps thanks to the Jardins’ series of lessons and evenings of dancing. The Bals de l’été, held every Wednesday from August 23 to September 27 from 7 to 11 p.m., will turn Les Jardins Gamelin into a great big dance floor for lovers of bachata, reggaeton, bzouk, disco and Afrobeat ! And the Salsafolie evenings, every Saturday from August 26 to September 30 from 7 to 11 p.m., are still where you’ll find some of the world’s most danceable music.

Notre Cinéma aux Jardins
Movie lovers will have their moment on Sunday, September 3 at 9 p.m., with an open-air screening of Chasse-Galerie : La légende directed by Jean-Philippe Duval. Presented in collaboration with Radio-Canada.

Sundays are fundays !
Lastly, kids and adults are invited to come to the Jardins every Sunday until September 10 for Les matinées familiales avec Petits bonheurs featuring music, storytelling and workshops. And don’t forget the children’s games found in the Maison jaune. Every Sunday afternoon, the facilitators of Club de jeux Randolph still have plenty of surprises in store, including the ride/game L’Aviateur, returning to the Jardins on August 27 and September 10. Randolph’s trivia nights (Soirée Quiz) will also return from 7 to 9 p.m.

Three festivals bring local sounds and flavours to the Jardins
The end of summer and beginning of fall is going to be a busy time for special events. Every Saturday from August 26 to September 16, Les Jardins Gamelin will welcome L’Épicerie Musicale presented by Les Escales Improbables de Montréal. This open-air public market’ss fun new concept will bring together local vegetables and local songs. Buy a piece of music, and receive a related fruit or vegetable. It’s an original way to support our local culture and agriculture at the same time.

Festival Quartiers Danses will present dance pieces, including several created especially for public spaces. Dancers will take over Les Jardins on September 7, 8 and 11-15, (starting at 5 p.m.)

The Festival international de la littérature, a Place Émilie Gamelin regular, will once again set up the Bibliothèque du FIL, a self-serve library full of secrets and words for adults and children, from September 22 to October 1, 11:30 a.m. to 6:30 p.m. Cultural facilitators from Exeko, a social innovation organization, will be on hand to serve as librarians and guides, and will present many activities on literary themes and the launch of the book Le Coeur-réflexe // Montréal brûle et tu es poésie on September 22 from 3 to 7 p.m. For the occasion, there will be cultural outreach activities, an exhibit of poetic posters, explorations through dance and public readings. On September 28, from noon to 1 p.m., L’art alphabétique will feature poetry by graduates of a literacy program based in Centre-Sud. Lastly, in the show Histoire arboricole de Montréal (en poésie et en chansons), September 28 from 5 to 6:30 p.m., poets and musicians will present their stories, poems and songs about Montreal’s flora.

Creativity in the spotlight
The KM3 event will stretch to place Émilie-Gamelin in September and October. As well as creative workshops for children at La Maison jaune, there are two special events scheduled. On September 8, the collective artwork Mouvements libres will see 350 cyclists take a night ride followed by a gathering in the Jardins, where Queen Ka will rap the evening to a close.

Then, from October 5 to 15, travel back to the 19th and 20 th centuries with the strange carnival of Humanorium – L’étrange fête foraine, reminiscent of the country fairs of yesteryear, with its trailers, ride and shooting gallery, all reimagined by contemporary artists. After a spin on the grocery-cart carousel by BGL, explore spaces filled with collections, sculptures, photographs and soundscapes, and don’t forget to check out the bone-chilling Museum of Death.

Also part of KM3 are a series of free creative workshops for children ages 5 to 13, inspired by the artworks of KM3, every Sunday from September 3 to October 1 from 3 to 5 p.m. The workshops will be presented in collaboration with Chromatic and will be held at La Maison jaune in Les Jardins Gamelin. Registration and reservations: km3artpublic.com

Much more than urban agriculture
Sentier Urbain highlights the work and expertise of the social greening specialists who have been beautifying and greening Les Jardins Gamelin with great care and intelligence. Thanks to them, the Jardins feature more than 75 species and 148 varieties of plant. At the end of August, Sentier Urbain will plant fall vegetables: lettuce, bok choy, radishes, turnips and beets. Also in the coming weeks, tomatoes, mushrooms and the gourds and melons will all be ready to harvest. The public is invited to come and pick a reasonable and respectful share of the bounty.

As well as presentations every Tuesday evening from 5 to 7 p.m., Sentier Urbain will host workshops every Sunday at 11 a.m. The workshops will cover topics such as edible insects, composting, green alleyways, permaculture, urban agriculture and beekeeping, harvesting seeds and heirloom vegetables.

Getting together with friends
The patio outside the Jardins’ snack bar is still a fantastic place to gather with friends and co-workers, or spend some alone-time – a charming, cheerful, green oasis in the heart of the city. It’s perfect for after-work drink, featuring cocktail created by mixologist Camille Valade. Students starting the new semester can come to the Jardins to work on group projects over light snacks or have something more substantial from the delicious snack bar: cheeseburger poutine, tuna melts, salmon poke or vegetarian chili tacos. The snack bar and bar are open Monday through Friday from 11 a.m. to 11 p.m. and Saturdays and Sundays from 9 a.m. to 11 p.m.

In the spring of 2015, Place Émilie-Gamelin showed a new face to Quartier des Spectacles residents and visitors with Les Jardins Gamelin, open from May to October. A large, green and inviting civic space in the heart of downtown, Les Jardins Gamelin return every year with an original temporary layout and a versatile set of facilities. The space’s unique, accessible and human-scale programming has become a part of daily life for residents and visitors, making Les Jardins Gamelin an inclusive gathering place in true Montreal style. The initiative, led by the Quartier des Spectacles Partnership, is produced in collaboration with Pépinière & co, Sentier Urbain and numerous partners, with the financial support of the borough of Ville-Marie.