FIVE FINALISTS FOR THE LUMINOTHÉRAPIE 2016 COMPETITION

Montreal, April 28, 2016 – The second phase of the Luminothérapie 2016-17 competition, Quebec’s largest competition for temporary public art installations, is now completed. The Quartier des Spectacles Partnership is proud to announce the five finalists for the 7th edition of Luminothérapie; the winner’s work will be presented in the Place des Festivals from December 8, 2016 to January 27, 2017.

The goal of the multidisciplinary competition is to produce an original winter-themed interactive experience in the Quartier des Spectacles with a large-scale installation in the Place des Festivals. For this seventh edition, participants must work within the “tale” theme to create a sense of wonder both day and night, while encouraging the participation of a broad audience, including families. Architectural video projections for two adjacent building façades will complete a unified concept through integration with the narrative structure of the primary work.

Five finalists have been selected from 28 entries: 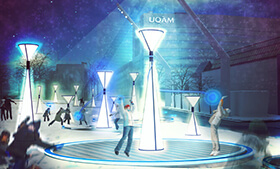 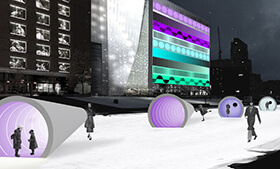 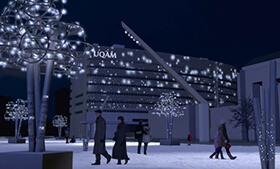 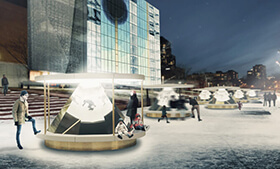 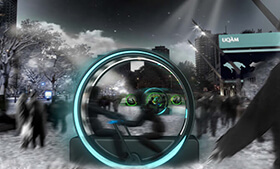 Ekumen, designed and made by Olivier Girouard, Jonathan Villeneuve, and Ottoblix in collaboration with Générique Design and
Jérôme Roy.

All proposals are available on the Quartier des Spectacles website, in a new section dedicated to the competition. The winner will be announced in October.

The competition has two phases: in the first, proposals are reviewed anonymously (to ensure impartiality and openness to new talent); in the second, the finalists selected in the first round will give a presentation to the jury. The jury will favour projects that combine a variety of perspectives by bringing together multiple disciplines: design, the performing arts, visual and media arts, etc. The total production budget is $300,000.

The rules and evaluation criteria are available at: http://www.quartierdesspectacles.com/en/competitions/1/luminotherapie-2016-2017/proposal

The jury for this seventh edition of Luminothérapie has nine members:

AWARDS FOR LUMINOTHÉRAPIE CREATORS AND THE PARTNERSHIP

In April 2016, the National Urban Design Awards, presented by the Royal Architectural Institute of Canada (RAIC), the Canadian Institute of Planners (CIP) and the Canadian Society of Landscape Architects (CSLA) recognized the excellence of two Luminothérapie works. Entre les rangs by Kanva (Luminothérapie 2013-14) and Impulsion by Lateral Office and CS Design (Luminothérapie 2015-16) each received a medal in the Urban Fragments category. Impressed by the projects’ originality and sustained work to animate public spaces in winter, the jury unanimously recognized the exceptional efforts made by the Quartier des Spectacles Partnership in producing the works, and issued a Certificate of Merit for organizing Luminothérapie. “The Quartier des Spectacles initiative provides Montreal’s design community with an opportunity to create a winter experience. It allows the creative energies of designers to flourish in the service of the public realm and in drawing the public out into the city,” the jury noted.

In recent years, several designers and artists have won awards after creating works for Luminothérapie, namely Lüz studio, Champagne Club Sandwich, KANVA and Lucion Média. Luminothérapie also generates considerable interest outside Quebec. In addition to substantial media coverage, some works have been well-received abroad, including Trouve Bob in Moscow and Iceberg (2012-13) by ATOMIC3 and Appareil Architecture in Brussels.

For more information about the competition and previous winners, read the Luminothérapie press kit. #luminotherapie

The Quartier des Spectacles is Montreal’s cultural heart, boasting North America’s most concentrated and diverse group of cultural venues. The district is the year-round host to countless festivals and events, many of which include free outdoor shows and activities. The Quartier also hosts innovative urban installations involving cutting-edge lighting design, immersive environments or interactive digital spaces. Thanks to the Place des Festivals and the world’s most extensive set of architectural video projection facilities used exclusively for presenting artistic content, the Quartier des Spectacles is an extraordinary creative space for designers. The Quartier des Spectacles is an international showcase for new multimedia technology, making Montreal a global leader in the urban exhibition of digital content.

VISUALS
Images of past editions of Luminothérapie are available on our Flickr account
Please include full credit.
Luminothérapie press kit