CHINATOWN IS SHINING BRIGHT THIS WINTER 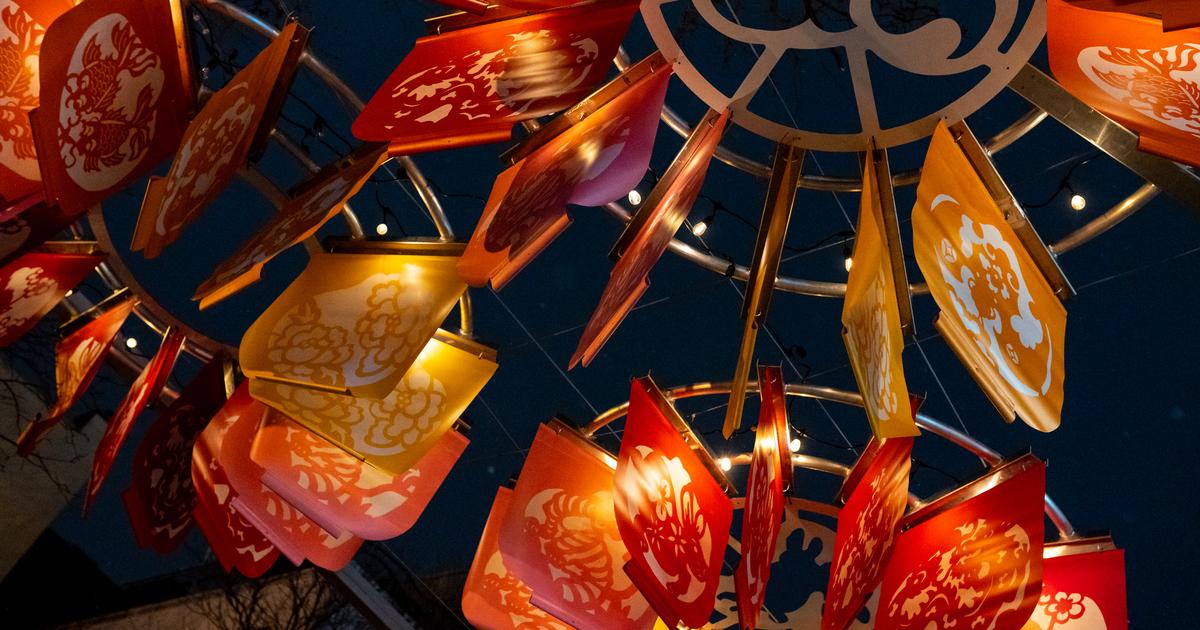 Montreal, December 14, 2022 – The Quartier des Spectacles Partnership and the Marché de Nuit Asiatique are thrilled to unveil a new luminous artwork in the streets of Chinatown. With COP15 taking place at the Palais des congrès, Montrealers and visitors are invited to discover, until March 2023, Dragons Chasing the Moon, a suspended outdoor installation by artist Karen Tam. The project is part of Les moments lumineux du cœur de l'île, an initiative aimed at enhancing the winter experience downtown.

The installation, which the artist describes as “joyous and light,” comprises a multitude of floating panels inspired by traditional Chinese paper cutouts. The panels are entwined with the lampposts on De La Gauchetière Street. The panels’ colours – pink, yellow, orange and red – are associated with the Lunar New Year. Tigers, rabbits, snakes and other auspicious Chinese motifs hang above the pedestrianized street. The work culminates in Sun-Yat-Sen Park, illuminated by garlands of lights, where the “dragon’s head” is represented by three large glowing suspended rings.

Linking Chinatown and downtown, the installation invites discovery and exploration while bringing light and joy to the dark winter months. It is also an opportunity for Ms. Tam to renew her longstanding commitment to the neighbourhood’s communities. 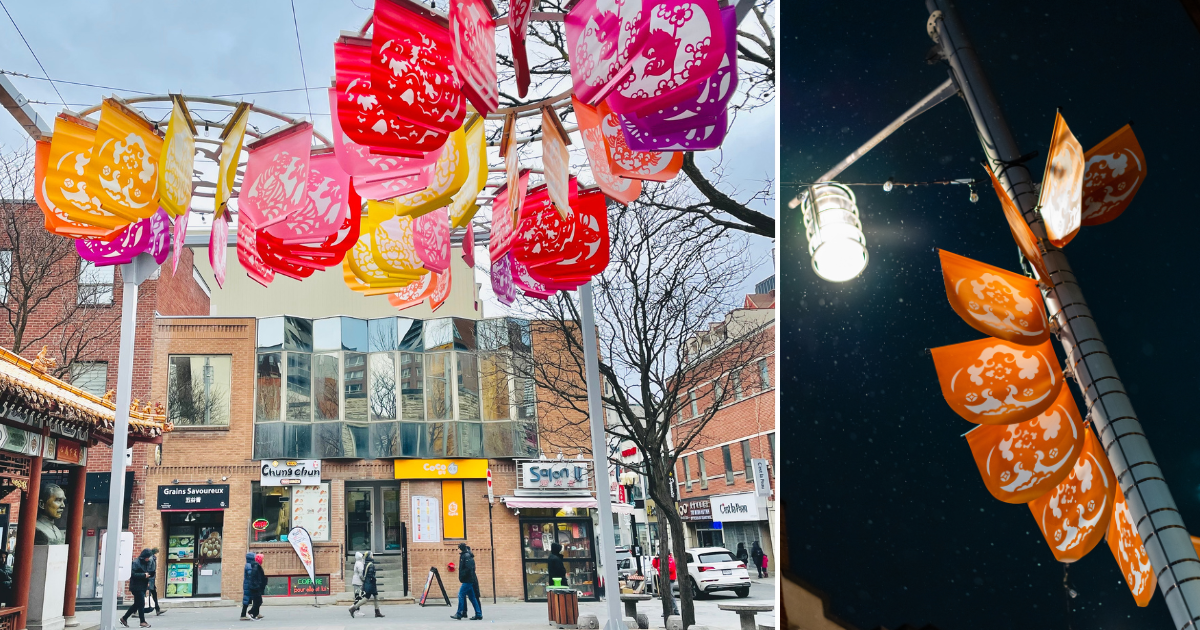 Dragons Chasing the Moon is presented with the financial support of the Government of Canada and the National Arts Centre. The work will be in place until March 2023, and a special Lunar New Year celebration will be held in January. Details of the celebration will be announced soon.

“My idea for this installation was to create a suspended and illuminated path of ‘dragons’ on De La Gauchetière in Chinatown, to lead visitors to the three rings or dragon’s ‘head’ in Sun-Yat Sen Park for the Lunar New Year celebrations. It is the winter companion to my Wishing Tree (2021) summer installation that paid homage to the Chinatown community,” said Karen Tam, creator of Dragons Chasing the Moon.

“We are proud to have been able to contribute to this unifying project alongside the Quartier des Spectacles Partnership. Karen Tam’s elegant installation is rich in symbolism (the Year of the Rabbit, in the context of the COP15 conference on biodiversity) and brings a new touch of beauty to Chinatown. We want to have a splendid celebration of the 2023 Lunar New Year, since it such an important moment in all of the great Asian traditions. We are continuing to work hard to revitalize Chinatown, and we’re headed in the right direction!” added Yifang Eva Hu, founder and executive director of the Marché de nuit asiatique.

“Chinatown is an iconic Montreal neighbourhood and one of the crown jewels of our city’s cultural heritage. It is one of the many faces of the city and makes important contributions to its economic vitality. We are thrilled that Montrealers and visitors to the downtown core will discover its charms as part of Les moments lumineux du cœur de l'île,” said Monique Simard, chair of the Quartier des Spectacles Partnership’s board of directors.

By Karen Tam
Until March 2023
On De La Gauchetière Street and in Sun-Yat-Sen Park, in Chinatown

The installation Dragons Chasing the Moon is part of Les moments lumineux du cœur de l’île, which will beautify downtown Montreal all winter.

A production of the Quartier des Spectacles Partnership and the Marché de nuit asiatique.

This installation is presented in connection with COP15 with the support of the Government of Canada and the National Arts Centre.

GETTING TO DOWNTOWN MONTREAL

Les moments lumineux du cœur de l’île is downtown Montreal’s collaborative winter project. It is the result of a fruitful collaboration among the Alliance centre-ville partners: the Quartier des Spectacles Partnership, SDC Montréal centre-ville, the Chamber of Commerce of Metropolitan Montreal and the Ville de Montréal, in collaboration with Tourisme Montréal. The initiative is a continuation of a series of summer projects launched in 2020. The winter Moments comprise a variety of outdoor activities organized by the partners and other cultural and economic stakeholders active in the area bounded by Atwater, Sherbrooke and Papineau streets and the St. Lawrence River.  The Moments include a host of original winter activities to be enjoyed outdoors in the downtown core: interactive and luminous installations and experiences, festivals and events, exceptional opportunities to meet talented local artisans, beautifully illuminated public spaces and other delightful surprises. From November to March, the Moments invite Montrealers, visitors and tourists to enjoy the luminous winter wonders of the heart of the island that make Montreal a unique winter destination.

The National Arts Centre is Canada’s bilingual, multi-disciplinary home for the performing arts. The NAC presents, creates, produces, and co-produces performing arts programming in various streams — the NAC Orchestra, Dance, English Theatre, French Theatre, Indigenous Theatre, and Popular Music and Variety — and nurtures the next generation of artists and audiences from across Canada. The NAC is located in the National Capital Region on the unceded territory of the Algonquin Anishinabeg Nation.