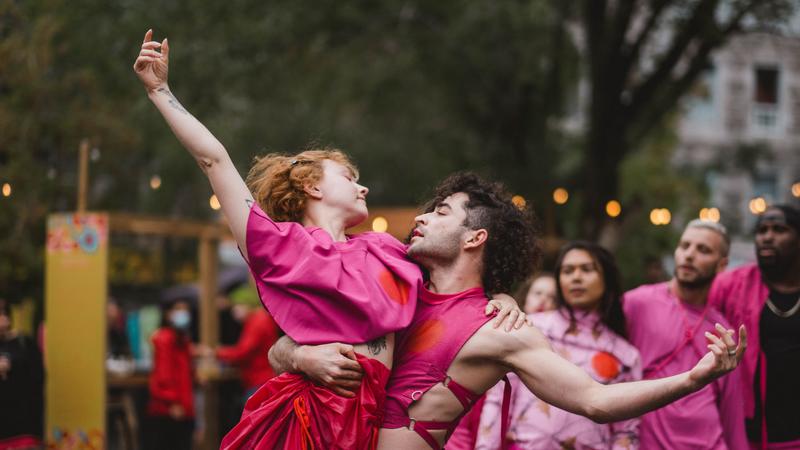 Montreal, October 14, 2021 – From June to October this year, Les aventures du cœur de l’île transformed downtown Montreal with major cultural activities and urban design initiatives. For the second summer in a row, the Quartier des Spectacles Partnership and Montréal centre-ville, in collaboration with Tourisme Montréal, tackled the challenge of making the city’s core – the area bounded by Atwater, Sherbrooke and Papineau streets and the St. Lawrence River – a safe, attractive and entertaining hub for residents and visitors. More than 918,000 visits* were recorded in August and September on Sainte-Catherine Street West in front of Place des Festivals, more than 530 artists performed throughout the district, and more than 200 partners got involved to make the season a memorable festive experience.

In the wake of the success of the summer 2020 downtown renewal project, the main stakeholders and their many partners continued their mobilization initiatives. In spite of everything done to date, the COVID-19 pandemic was still having negative impacts on the city’s cultural and economic heart. In March 2021, the Ville de Montréal and the Gouvernement du Québec reaffirmed their confidence in the project, making it possible to leverage the significant experience gained in 2020. The teams were able to program an even more comprehensive set of activities for the summer of 2021, including artistic performances, urban design, public art, exploratory walks and high-profile shows.

Oases and the living arts throughout downtown

There were some nice surprises for visitors on virtually every street corner this summer. Nine Oases conceived by local designers offered safe places to relax, have a drink with friends or enjoy a snack. Visitors, whether from Montreal or elsewhere, made ample use of these urban islands, which quickly emerged as essential downtown living spaces. More specifically, 90%** of persons surveyed said they had a positive opinion of the oases they visited.

Through the first weekend in October, more than 315 exciting artistic performances at some 20 venues entertained audiences of all ages each weekend. More than 530 artists specializing in theatre, dance, music, circus, comedy, and the visual and digital arts performed as part of Les aventures du cœur de l’île. Exceptional partners, including Les productions Diverso, Artch art contemporain, Le Monastère and the OSM, contributed to the impressively diverse program. Lastly, four theme weekends were held over the course of the summer, each one making the downtown core a temporary Circus, Classical, Festivity and Dance hub.

Special projects and a signature moment also helped make Les aventures du cœur de l’île a rich, unifying project for the public and partners alike. First, the evolving public artwork Les Visages de Montréal, by the Projet Inside Out group, highlighted 2,247 smiling faces of Montrealers with large-scale mosaics on 30 downtown building façades. The project involved 18 leading downtown institutions and engaged directly with residents through its famous photo booth truck. Le sentier du cœur de l’île by Intégral Jean Beaudoin and Multimedia Nova-Lux, a 15 km circuit featuring more than 100 artworks listed by Art public Montréal, along with the Oases and major cultural sites, helped visitors discover the heart of the island with fresh eyes. Members of public could scan QR codes on the ground to learn more about the nearest installation. Lastly, an iconic summer event, the dance performance Les arts debout by La Résistance, touched audiences everywhere it was presented. The passionate, powerful and inspiring work, featuring a dozen dancers led by the talented artists Lydia Bouchard and Merryn Kritzinger, was performed 16 times. All these complementary elements astonished, amused, touched and unified the large audiences that gathered each week.

“Les aventures du cœur de l’île created a real sense of reassurance. The knowledge that the partners were proactive and making tangible investments to revitalize the downtown core had a strong positive impact. The public did its part by visiting downtown, making full use of the Oases and enjoying the wide range of artistic activities presented. Together, we helped make our city’s downtown core a festive place, brimming with life and culture,” said Monique Simard, chair Quartier des Spectacles Partnership’s board of directors.

The mobilization of 200 cultural and economic partners based in downtown Montreal and the formation of seven advisory committees was a tour de force carried out by the Quartier des Spectacles and Montréal centre-ville. Through Les aventures du cœur de l’île, solid ties were forged among the various permanent organizations and associations involved.

The public had access to a new website (lecoeurdelile.com) and its interactive map, as well as new social media pages and a weekly newsletter, to help them find summer projects presented by 55 organizations of all types, such as the Museum of Fine Arts, BAnQ and Complexe Desjardins. Les aventures du cœur de l’île emerged as an essential focal point for planning any visit to the downtown core. Visitors appreciated the ambiance in the downtown core, and took full advantage of the district’s shopping and dining options, with 50%* ** of restaurants and 54%* ** of retailers noting an increase in revenues compared with 2020. Between July 1 and September 30, pedestrian traffic on Saint-Catherine Street grew by an average of 50%****. The strongly unifying project was a success, confirming that culture and business can work together productively.

“Amidst an unprecedented crisis, Les aventures du cœur de l’île was the catalyst we needed – a project that could bring together economic, cultural and public-sector partners to pool their efforts, resources, ideas and creativity around a shared vision for the city’s downtown. The results confirm that we accomplished our mission. The next step is to keep working to ensure that the city’s downtown recovers fully by the end of the pandemic,” said Glenn Castanheira, executive director of Montréal centre-ville.

With their vacation and recreation options limited by public health measures, Montrealers and residents of neighbouring regions could count on Les aventures du cœur de l’île to add some fun to their free time with safe activities in downtown Montreal. Some 76% ** of people who took advantage of the activities and new facilities came from the Island of Montreal, confirming the effectiveness of the main partners’ efforts to encourage Montrealers to be tourists in their own city.

“Montreal will rebound thanks to our innate ability to transform ourselves and adapt to a fast-changing context. That’s what we have worked to do together, and it will continue to be our destination’s strength,” said Yves Lalumière, CEO of Tourisme Montréal.

The return of big summer events

In late June, Les aventures du cœur de l’île hosted fans of the Montreal Canadiens safely in Place des Festivals, with four evenings of live broadcasts of the 2021 Stanley Cup Final series. More than 18,200 people came out to cheer for their Habs!

Then, after a one-year hiatus, major festivals returned to the Quartier des Spectacles. Among others, downtown Montreal welcomed back the Festival international Nuits d'Afrique, MONTRÉAL COMPLÈTEMENT CiRQUE, the Montreal First Peoples’ Festival, Just For Laughs, the Francos de Montréal, the Festival Quartiers Danses, the FASHION + DESIGN Festival and the Festival international de jazz de Montréal. Thousands of festivalgoers came out to enjoy the island’s wonders, enhancing their overall experience.

*The number of visits is the cumulative number of people (entering and leaving) Sainte-Catherine St. W. in front of Place des Festivals. Data were collected between August 1 and September 30, 2021.

**Based on an on-site survey of 1118 individuals conducted by the Quartier des Spectacles Partnership between July 28 and September 4, 2021.

***Data from a survey of Montréal centre-ville members conducted by L’Observateur in August 2021.

****Data from Eco-Counter automated counters operated by Montréal centre-ville between July 1 and September 30, 2021.

The result of a productive partnership between the Quartier des Spectacles and Montréal centre-ville, in collaboration with Tourisme Montréal and with the financial support of the Ville de Montréal, Les aventures du cœur de l’île is downtown Montreal’s summer relaunch project. Bringing together the cultural and economic sectors, the initiative features a variety of activities specific to the project as well as the partners’ programming. From Atwater to Papineau streets, between Sherbrooke Street and the St. Lawrence River, downtown is the setting for next-generation activities thanks to several new pedestrian zones, safe designs for public spaces, spontaneous performances and an enhanced cultural offer. From June to the fall, these initiatives will welcome Montrealers and residents of neighbouring regions to be part of the city’s revival and enjoy the Island’s wonders.

Montréal centre-ville is the city’s downtown business development corporation (SDC), a non-profit organization whose mission is to contribute to the development, animation and promotion of downtown Montreal. The association has nearly 5,000 member businesses located between Atwater Avenue and Saint-Urbain Street and between Sherbrooke and Saint-Antoine streets. Montréal centre-ville was founded in 1999 and is the largest organization of its kind in Canada.

Tourisme Montréal is a private, non-profit organization that has been positioning Montréal as a world-class leisure and business travel destination for over 100 years. The organization leads innovative tourism strategies that have a twofold objective: to ensure visitors enjoy a quality experience and to balance economic growth with the city’s long-term interests. Tourisme Montréal plays a leading role in the management and development of Montréal’s tourism industry, and advises on issues related to the city’s economic, urban and cultural development.