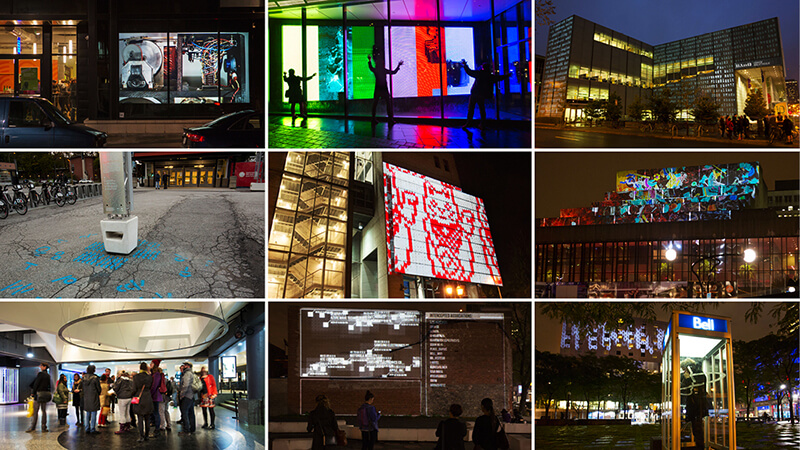 Montréal, October 8 2015 – Two leading organizations in the development of interactive projects, the National Film Board of Canada (NFB) and the Quartier des Spectacles Partnership, have joined forces to produce several innovative art projects for public spaces, including international co-productions involving the European Union and artists from several European Union countries.

Recently, the NFB Digital Studio and the Quartier des Spectacles Partnership have launched a call for ideas for a new interactive public artwork to be exhibited in Montreal’s acclaimed cultural district, the Quartier des Spectacles, in the summer of 2017. Under the theme Making the Invisible Visible, artists are invited to explore the profound changes that are transforming our world and yet remain imperceptible. The winning artwork will be designed to travel and be adaptable to various types of public spaces in different cities around the world. Interactivity will be at the heart of the work, which will come to life when members of the public engage with it.

Making the Invisible Visible is meant to shed light on trends stemming from great cycles of change, be they political, legal, financial, economic, social, behavioural or technological. The selected project will draw inspiration from a contemporary issue that is already bringing about significant, irreversible changes in our world, but whose impact remains hidden from view because we lack the key to decode it. The deadline for submitting proposals is November 27, and the winning project will be announced in February 2016.

For further information on Making the Invisibe Visible, see the press release and website nfb.ca/visible-invisible.

Common Space? Humans at the Heart of Technology

The two organizations are also proud to have produced Common Space?, a series of eight new works now on display in the Quartier des Spectacles, conceived as a walking tour, either self-directed or guided, connecting several sites in the district. The project, which runs until October 18, features the works of 13 artists from seven countries on the shared theme of humans at the heart of technology. Through video projections, technology, and interactive tools, they set out to reconceptualise our perception of that environment, which rather than remaining a grouping of imposed structures becomes a pliable entity that can be changed through design and creation. Common Space? is a co-production of the NFB, the Quartier des Spectacles Partnership and MUTEK, and is part of the broader Human Futures project, produced with the support of the European Union’s Culture Programme.

For further information on Common Space? , see the press release and website nfb.ca/commonspace

The Quartier des Spectacles Partnership is a non-profit organization responsible for operating and programming the Quartier’s lively public spaces, for illuminating the area through distinctive lighting design as well as for promoting this must-visit cultural destination. The Partnership is a member of several international networks, including the Connecting Cities Network and Lighting Urban Community International (LUCI), as well as the Global Cultural Districts Network. For more information, visit quartierdesspectacles.com.

The National Film Board of Canada (NFB) is one of the world’s leading digital content hubs, creating groundbreaking interactive documentaries and animation, mobile content, installations and participatory experiences. NFB interactive productions and digital platforms have won 100 awards, including 11 Webbys. To access acclaimed NFB content, visit NFB.ca or download its apps for smartphones, tablets and connected TV.

VISUALS
Available on our FTP site (do not use Google Chrome) : ftp://remote.quartierdesspectacles.com
User: medias • Password: medias