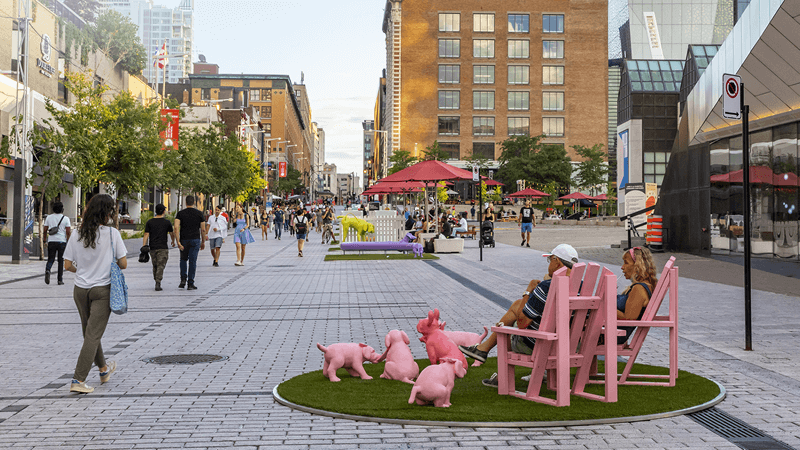 Montreal, April 29, 2021 – The Quartier des Spectacles Partnership is pleased to announce the composition of its board of directors for 2021-22. New directors were elected at the Annual General Meeting, held by videoconference on April 28.

The Quartier des Spectacles Partnership's board of directors is composed of 21 directors from the cultural, socio-economic (business, tourism and education) and community sectors. There are 14 members elected at the Annual General Meeting, and seven appointed by the board.

This year there were nine vacancies in three categories. From the cultural sector, the new directors are Mr. Nassib El-Husseini, Mr. Marcel Jean, Mr. Claude Joli-Cour, Mr. Paul Harry Toussaint and Ms. Luci Tremblay. The Partnership welcomes Mr. Marc-André Fortin to the board as a representative of the community sector. Lastly, the following directors were elected by acclamation to directorships for the tourism sector and non-commercial institutions: Mr. Glenn Castanheira, Ms. Manuela Goya and Ms. Diane Langlois.

The Partnership thanks all board members for their generous commitment, with special thanks to the directors who left the board in 2020: Mr. Jean R. Dupré, Mr. Martin Galarneau, Ms. Jeanne Hardy, Ms. Michelle Llambias Meunier, Ms. Nadine Marchand and Mr. Émile Roux.

* Member of the executive committe

2020 marked a turning point for the Quartier des Spectacles Partnership. Major changes were already evident in the first quarter, when the COVID-19 pandemic forced the Quebec government to order a lockdown, dealing a major blow to the cultural sector. The Quartier's entire ecosystem was suddenly put in a precarious position by the crisis, like cultural districts in every city affected by the pandemic. Nevertheless, several committees were formed to help the Partnership and its members work together more closely. These mobilization initiatives demonstrated the Partnership's leadership, agility and commitment to facing the crisis in unity. Several major logistical and operational projects benefited from the quiet resulting from the pandemic, which will ultimately make the return of events and festivities to the Quartier more efficient. This included the consolidation of our warehouses, the Coulisses and its multifunctional technical building on Bleury St., lot 066 and the Esplanade Tranquille, a new public space in the Quartier scheduled to open in summer 2021.

NEW DIRECTIONS FOR THE PARTNERSHIP

The year also featured a renewal of the Partnership's management committee. After six months with Monique Simard serving as interim executive director, in August the Partnership welcomed a new executive director, Éric Lefebvre, who had previously been the Partnership's director of strategic development. In the fall, Maripierre D'Amour joined the Partnership as head of communications, marketing and public affairs, while Marc Randoll became executive director of the logistics, production and technology department; all three are members of the management committee. Lastly, after several months as interim programming director, Catherine Girard Lantagne assumed the position on a permanent basis early in 2021. The new team members all have considerable experience in leading and managing cultural projects. With these new team members on board, the Partnership is equipped to meet the challenges of the coming years.

The public health crisis inspired an extraordinary surge of solidarity, and the Partnership was a catalyst for its members and partners. Its unifying initiatives positioned it as a leading figure on Montreal's cultural scene, by mobilizing the community through the formation of five working groups and by taking active roles with a variety of strategic forums. The Quartier hosted a COVID testing clinic in Place des Festivals at a time of great need, and produced special lighting for public spaces in solidarity with healthcare workers and cultural venues. In addition, the Partnership revised its promotional campaign; instead of discussing the cultural offer, the campaign pivoted to support and solidarity for the cultural sector. The initiative was a success, well-received by the public and the industry alike.

A VIBRANT, DYNAMIC AND SAFE DOWNTOWN DURING THE GLOBAL PANDEMIC

With a mandate from the mayor of Montreal, the Quartier des Spectacles Partnership and the Chamber of Commerce of Metropolitan Montreal acted swiftly to develop a far-reaching action plan to help the heart of the metropolis reclaim its liveliness and vitality. In collaboration with Tourisme Montréal, with the support of the Gouvernement du Québec, the Ville de Montréal and Desjardins, the Relance du centre-ville project led to new urban designs and presented cultural activities in an expanded zone from July to October. Montrealers were able to enjoy the warm season while following public health guidelines and supporting local companies and restaurants.

The success of the relaunch made it possible for the Partnership to enhance its winter program with an expanded edition of Luminothérapie, featuring six interactive, audio and contemplative installations, and by uniting the winter offers of several downtown organizations. The Partnership's winter activities spanned 16 weeks - twice as long as usual. The special winter program also included the Moment cœur battant, a message of solidarity with the cultural sector, delivering a powerful reminder that the city is alive and well, its cultural heart still beating strong; it was a rallying cry in sound and light that echoed throughout the city thanks to the participation of some 30 partners. In all, Luminothérapie | Cœur battant and its original, safe and participatory winter art walk attracted more than 130,000 people.

The impressive mobilization of the Quartier des Spectacles Partnership and other key players in downtown Montreal was essential for maintaining visitor numbers. The various coordination and programming activities unquestionably brought warmth and life to the Quartier des Spectacles over the course of a most challenging 2020. The coming months augur well: a survey conducted by the Partnership in June and December 2020 suggests that the pandemic has not lessened the public's desire to enjoy culture and public gatherings. The people are ready, and now it's time to welcome them.

2021 will be a time for strengthening ties between the Partnership and its members, the cultural industry and Montrealers. Several new committees will be formed, including one focused on cinema, and the existing ones will expand their work to support and mobilize the wider downtown ecosystem. The summer will see the return of a major animation and urban design project, even more festive than the 2020 edition, thanks in particular to the collaboration with Montréal centre-ville, and the inauguration of Esplanade Tranquille in the Quartier. This year will certainly be a time to reconnect with each other and reunite culture, audiences and artists.