PRESENTATION OF TWO PUBLIC ARTWORKS AND A COLLOQUIUM 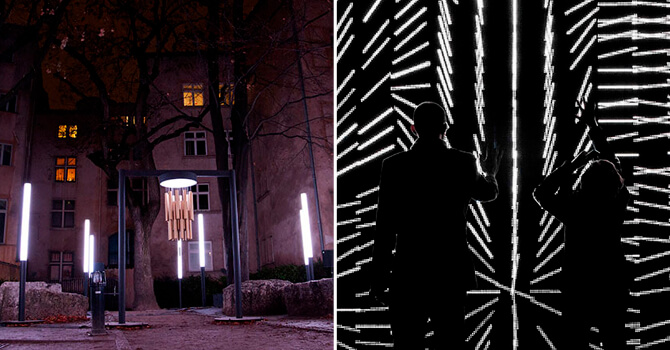 In particular, the Partnership is supporting two works by local artists: Chimes by the Blackbox collective and Nor Mind by Daniel Iregui. The installations will be presented on the Place des Arts Esplanade. Both are consistent with the fundamental character of the Quartier des Spectacles Partnership's other productions, such as 21 Balançoires/21 Swings and the participatory installations presented during Luminothérapie, which invite the public to interact with them and bring them to life.

Visitors are invited to activate this set of chimes comprising more than 30 illuminated tubes and eight loudspeakers, triggering a transformation of the space through sound and light. Chimes is the work of a collective of six artists who recently graduated from UQAM; it is co-produced by the Quartier des Spectacles Partnership and Illuminart.

The founder of the Iregular studio, Daniel Iregui, is a familiar face in the Quartier des Spectacles, where he has previously presented several architectural video projections and interactive installations, including Jardin de nuit, a work produced by the Partnership, for which he recently won a Grafika award. The co-production Nor Mind is a touch-sensitive interactive sculpture that changes its appearance as people interact with it.

The I.A.rt Colloquium: thinking about the public art of the future

As part of MONTRÉAL EN LUMIÈRE, the Quartier des Spectacles Partnership is working with Illuminart, Montréal Joue, and the Université du Québec à Montréal to host a colloquium on Thursday, February 22, I.A.rt: Artificial Intelligence and Data Serving Creative Work for Public Spaces. This unique gathering will explore the implications of artificial intelligence for the creative process. Artists, creative-industry professionals and AI experts will share their thoughts about the creative prospects and possibilities for public spaces in the age of big data. The I.A.rt Colloquium is supported by the Ville de Montréal and the Secrétariat à la région métropolitaine of the Ministère des Affaires municipales et de l'Occupation du territoire, and Canadian Heritage.

The complete program for the day can be found here.

About the Quartier des Spectacles Partnership

The Quartier des Spectacles Partnership, founded in 2003, is a non-profit organization with more than 70 members active in the district. It is responsible for animating the Quartier des Spectacles by programming cultural activities, managing and animating public spaces, providing distinctive illumination, and promoting the Quartier as a must-visit cultural destination. The Partnership is supported by the Ville de Montréal and the Secrétariat à la région métropolitaine of the Ministère des Affaires municipales et de l'Occupation du territoire.