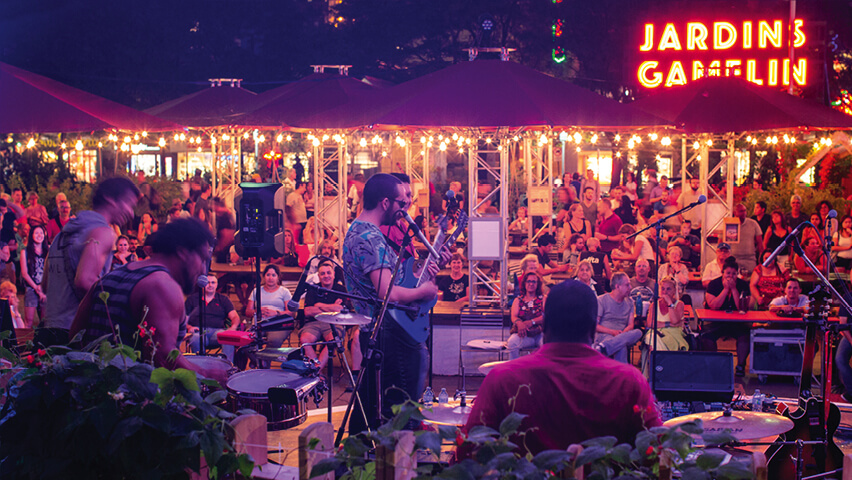 Montreal, May 27, 2019 – This season, Les Jardins Gamelin will feature the immense talent of Montreal’s DJs and musicians with a program showcasing the city’s musical diversity. Monday through Friday throughout the season, at lunchtime and in the evening, drop in for some live music with 70 concerts and high-energy beats from more than 25 DJs. As well as presenting eight original music series, Les Jardins Gamelin is the place to be for a fun, danceable musical ambiance, every day.

MUSIC FOR ALL TASTES

The music season in Les Jardins Gamelin gets underway on May 30 with a 100%-Montreal line-up. World music, French chanson, jazz, hip-hop, electronica: artists of every stripe, from more than 25 different cultural backgrounds, will be in the spotlight during the Jardins’ fifth season.

Every Tuesday evening, the DJs of Apéros Criollo spin the best Afro-Caribbean grooves. Enjoy an amazing variety of sounds with the Jardins’ DJs in residence: Oonga, Jérico, Akantu, Farafina (Moonshine collective), Kobal and DJ ECP. Get ready to move!

World music is the order of the day on Thursdays, both at lunchtime and in the evening with Mmm / Montréal musique du monde (pronounce M-M-M). Haitian-Canadian singer Vox Sambou opens the series on June  6. Also in June , folklore and urban life come together for a Latin American journey with El Son Sono (June 20). Festive, warm, colourful: the Mmm series will also include theme nights: cumbia al aire and Cuban, Haitian and Mandinka music. The Haïti en Folie Festival is also joining the fun, with Fwonte and DJ Sweet Larock (July 25).

Midis jazz and Midis en chanson take over on Fridays at lunchtime. In June and July , jazz concerts with a variety of inspirations – from swing to Afro-jazz, Gypsy swing and bebop – are the heart of the program. Headliners include pianist Simon Denizart, Révélation jazz Radio-Canada 2016-2017 and two-time ADISQ nominee (June 14). Acclaimed pianist and singer Elizabeth Shepherd will play alongside veteran musicians Rémi-Jean LeBlanc, Jacques Kuba Séguin and Mark Nelson (July 5). August and September will feature some great francophone vocalists, including the two most recent winners of Ma première Place des Arts, Mélodie Spear and Mélanie Forgues (September 6).

Party music, dance music, Latin, retro: the Jardins’ concerts and DJs are sure to make you smile. Some examples: at lunchtime on Wednesdays, expect a tropical atmosphere. It’s hard to sit still when the Tupi Collective is spinning the most delicious Brazilian hits, past and present.

After work on Wednesdays, it’s time for Étais-tu né? (“were you born?”), a new series focused on the big hits of the 50s through 80s. With DJ Mathieu Beauséjour at the tables, rediscover the catchiest gems of bygone days. There will be a new theme each week, starting with 60s soul (June 5).

Ce soir, on danse! is back every Friday night with live musicians and DJs. This season, pop, indie and hip-hop join dub, reggae, dancehall, Afro-house, electro-Latin and house music. The Montreal trio Chances – singers and keyboard players Chloé Lacasse and Geneviève Toupin and drummer Vincent Carré – will play pop seasoned with an electronic touch (May 31). Pull-Up Selecta All Stars, a six-piece Montreal band, will give a captivating reggae show with an electronic twist (June 14).

It’s always possible – and always a lot of fun – to find hidden talent during Karaoke night. Every Monday, amaze and amuse the crowd by taking the mic and singing your favourite song.

Last but not least, ICI Musique, Radio-Canada’s music channel, is back for the entire season to provide ambient music in a wide range of genres, including many Canadian artists.

DETAILS OF UPCOMING CONCERTS AND DJ SETS: SUBSCRIBE TO THE WEEKLY JARDINS GAMELIN NEWSLETTER OR VISIT OUR NEW WEBSITE: JARDINSGAMELIN.COM

In the spring of 2015, Place Émilie-Gamelin showed a new face to Quartier des Spectacles residents and visitors with Les Jardins Gamelin, open from May to September. A large, green and inviting civic space in the heart of downtown, Les Jardins Gamelin return every year with an original temporary layout and a versatile set of facilities. The space’s unique, accessible and human-scale programming, which has now completed five seasons, has become a part of daily life for residents and visitors, making Les Jardins Gamelin an inclusive gathering place in true Montreal style. The initiative, led by the Quartier des Spectacles Partnership, is produced in collaboration with Pépinière & co, Sentier Urbain and numerous partners, with the financial support of the borough of Ville-Marie.

The Quartier des Spectacles Partnership, founded in 2003, is a non-profit organization with 85 members active in the district. It is responsible for managing and animating the Quartier’s public spaces, providing distinctive illumination, and promoting the Quartier as a must-visit cultural destination. The Partnership is supported by the Ville de Montréal.