The Goethe-Institut: a cultural crossroads for 60 years 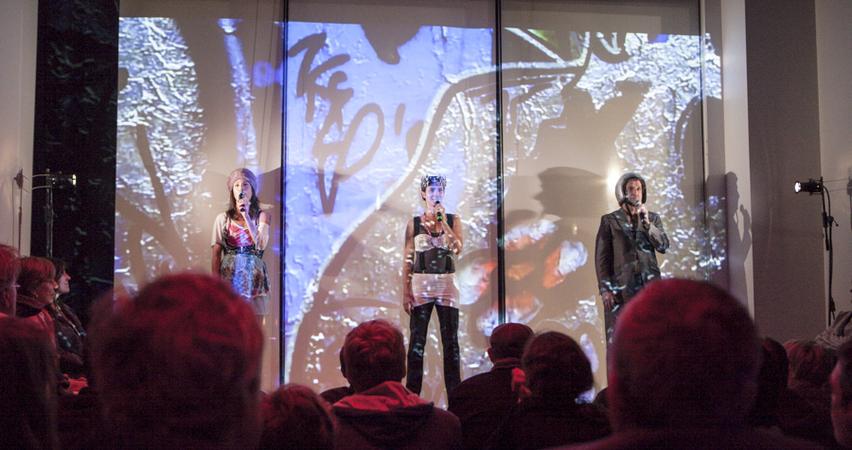 Located at the corner of Saint-Laurent Blvd. and Ontario St., the Goethe-Institut and its large windows have been a fixture on the Montreal scene for 60 years. To mark the big anniversary, the ambulatory performance piece Berlin (r)appelle, presented in collaboration with the Festival international de la littérature (FIL), will light up façades and turn the library upside down.

We spoke with the organization’s director, Nadja Furth, and the head of its cultural department, Caroline Gagnon, to learn more about the history and dynamism of this hub of German culture in Montreal.

What is the mission of the Goethe-Institut Montreal?

Nadja Furth (NF): Our mission is basically to build bridges between Germans and Quebecers by teaching Montrealers a little more about German culture. The cultural component is important, because art is a powerful tool for making connections, but our activities also have a linguistic component, since we offer language classes in our building. We’re also responsible for training German teachers working in Quebec’s cégeps and universities. We give local institutions the opportunity to improve their proficiency in German and enhance their programs with, for example, trips to Germany.

Caroline Gagnon (CG): It’s important to note that the Goethe-Institut does more than present German culture to Quebecers. At the heart of our work and programs, there’s always an element of collaboration and exchange with local partners.

What kind of cultural activities are you involved in? Are they targeted toward both the arts community and the general public?

NF : We encourage artists to be mobile so that creative people from both countries can meet each other and discover new ways of doing things. We create travel opportunities for artists from both Quebec and Germany. In both cases, our many partnerships with local institutions and organizations here and in Europe allow us to create stimulating and structured settings for interaction. As well as presenting works, we organize creative residencies, cultural and artistic exchanges, public gatherings and so on.

CG : The Goethe-Institut also has a library that’s open to everyone. We have works in German, naturally, but we also have many that are translated into English and French. And our shelves recently became home to a section dedicated to Indigenous literature translated into German.

You are located in the Quartier des Spectacles. How does that help you get involved in the city’s cultural life?

NF : We’ve been located in the Quartier for more than ten years. The Institut has always been committed to being as closely involved with the city’s cultural life as possible. As part of that, our outside walls have been transformed into three large projection surfaces where we can present works throughout the year!

CG : We also participate in the programming of several activities that happen in the Quartier des Spectacles, including MONTRÉAL EN LUMIÈRE’s famous Nuit Blanche and Les Journées de la culture, where we present films, virtual reality experiences, an audio installation in the library and mini-courses in German for everyone.

The Goethe-Institut Montreal’s 60th anniversary is this year, and among the events marking the occasion is a presentation of the ambulatory performance Berlin (r)appelle, presented in collaboration with the Festival international de la littérature (FIL). What are this project’s origins?

CG : Berlin appelle was a creation by Daniel Brière and Evelyne de la Chenelière, first presented at the Goethe in 2013. For our 60th anniversary, we wanted to present a work that would embody not only the idea of intercultural exchange but also highlight the influence and inspiration that German culture has had on local artists over the years. This piece was perfect because when it was originally produced the artists had proposed it to us after a visit to Berlin. It’s a love letter to that city and its culture! Since the show was presented only twice in its original version, we wanted to give Montrealers another chance to see it. We should note that Berlin (r)appelle will be slightly different from the original version, with several additions and new aspects to discover.

What can the audience expect?

NF : It’s a work that combines theatre, music, visual arts… it’s ambulatory in that it moves through the rooms in the Goethe, including the library stacks and the classrooms, where we see all kinds of performances and presentations, including one that’s a nod to Quebec’s literature. After the show, we’re hosting an evening of dancing with a DJ, at the Institut. It’s going to be a great party!

Festival international de la littérature
From September 23 to October 2, 2022 Consult the activities of the festival