22 events for this cultural season 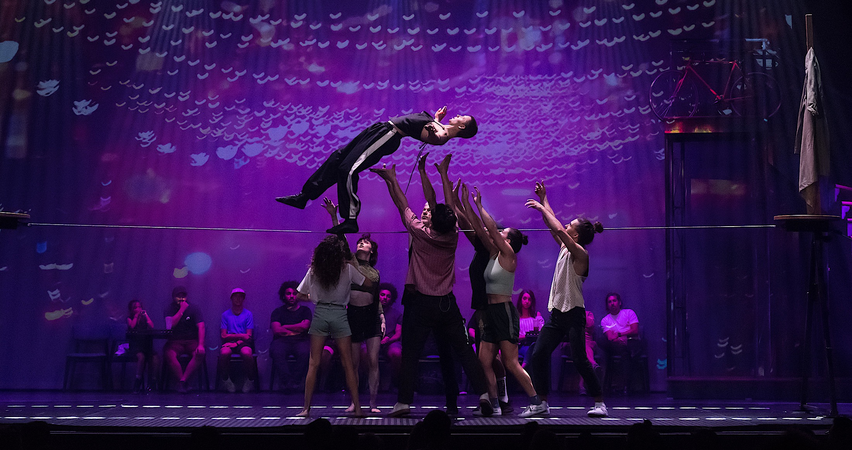 The cultural season is breathtaking in Montreal and it’s going full tilt in the Quartier des Spectacles, with its 30 performance venues! There’s everything from theatre and music to dance, circus and digital arts – there’s an incredible variety of things to do. Here are a few suggestions to help you find your way through the cornucopia of early-season activities and events, among the hundred or so daily activities in the Quartier.

From September 20 to October 15, Théâtre du Nouveau Monde presents La nuit des rois, an adaptation of Shakespeare’s Twelfth Night directed by Frédéric Bélanger, starring Marie-Pier Labrecque, Clara Prévost, Yves Jacques and Benoît McGinnis. In this romantic comedy, we follow the adventures of the twins Viola and Sébastien, who are separated in a shipwreck and find their separate ways to the court of Duke Orsino…

The all-woman play Mama by Montreal playwright Nathalie Doummar puts twelve women at the bedside of an ailing patriarch. Running from September 7 to October 8 at Théâtre Duceppe, the drama about legacies and transgressions is directed by Marie-Ève Milot. The excellent cast includes the playwright.

There’s also some great theatre for kids with Le Potager by Karine Sauvé and Érika Tremblay-Roy. From October 1 to 16, Maison Théâtre presents the show – part rock concert and part immersive video installation about gardens – especially for children ages 3 to 7.

Mon île, mon cœur, hosted by Didier Lucien, is a spectacular love letter to Montreal, coming to Espace St-Denis on September 14 and 15. This new work by circus company Les 7 doigts, depicting the adventures of a newcomer to the city, combines circus arts, digital art, theatre and dance.

At the Gesù, as part of the Clowns de Montréal festival, Tupituqaq is a production by the Inuit circus company Tupiq A.C.T. combining acrobatics with the unique sensibility of Inuit tales and legends. The show focuses on Maina’s quest, in which a young Inuk strikes out into the tundra in search of her beloved grandmother. It will be presented on October 1.

Don’t miss The Rite of Spring by Pina Bausch, from October 5 to 8 at Théâtre Maisonneuve in Place des Arts, an exceptional collaboration between the Pina Bausch Foundation, École des Sables and Sadler’s Wells. Featuring 36 dancers from 14 African countries, this blockbuster show has extraordinary earthy energy. A presentation of common ground(s) by choreographers Germaine Acogny and Malou Airaudo starts the evening.

A mixed program will open the 66th season of Les Grands Ballets, from October 20 to 23 at Salle Wilfrid-Pelletier in Place des Arts. During this musical evening, the audience will see a performance of Kiara Flavin’s first work for the company, Les Vagues, as well as Jeunehomme (pas de deux) by Uwe Scholz and two dances by Étienne Béchard: Carmen and The Rite of Spring.

At the Agora de la danse, in the Wilder Building - Espace Danse, dancers and choreographers Justine A. Chambers and Laurie Young present One Hundred More, a resistance manifesto inspired by the essay The Minor Gesture by Erin Manning, about the small gestures that change the world. Also, stay tuned for Tangente's upcoming shows, including the return of its mythical Danses Buissonnières this fall.

Acclaimed singer and impressionist Véronique DiCaire is back in Quebec after charming audiences in France and Las Vegas. In her new show, on September 30 and October 1 at Salle Wilfrid-Pelletier in Place des Arts, the chameleon-voiced artist becomes more than 50 different singers, including Edith Piaf, Celine Dion, Adele and Madonna!

The last two years have brought all kinds of upheavals, transforming human relationships and our perspective on the body. The exhibition À corps perdus – Sharing Madness, presented by curators Florence-Agathe Dubé-Moreau and Maude Johnson at Galerie de l’UQÀM from September 9 to October 22, brings together internationally renowned artists and choreographers interested in exploring new ways of “moving together.”

Mika Rottenberg is a New York-based artist who has earned acclaim for her installations and films “investigating the link between the female body and production mechanisms.” Her solo exhibition at the Musée d’art contemporain, running until October 10, includes films and sculptures along with three video installations created between 2015 and 2019.

If you love immersive experiences, the Society for Arts and Technology is the place to be, with an intriguing double bill until October 7. Bliminal by Sansperte_Lossless is an audio-visual work with an ethereal ambiance, while a collaborative work by Studio Name and David Drouin, État Six, is an evocative exploration of the different phases of sleep.

Also worth checking out is the eponymous exhibition by Emmanuelle Léonard at Galerie ELLEPHANT until October 22. The photographer reveals her vision of Montreal at night during curfew – a near-deserted city whose only remaining denizens were the homeless, delivery people and police…

Two pieces will be performed at the Orchestral Auroras concert at the Maison Symphonique on September 25. Nunami nipiit is a creation by Elisapie in which the Inuit singer will perform alongside the Orchestre métropolitain conducted by Yanick Nezet-Séguin. It will be followed by Ravel’s ballet Daphnis et Chloé.

Combining theatre and music, Rafael Payare’s Midsummer Night’s Dream, on September 21 and 22 at the Maison symphonique, includes excerpts from Shakespeare’s play and the Mendelssohn work that it inspired. Debussy’s Nocturnes completes this enchanting program.

Fans of Harmonium won’t want to miss The Original Creation, a majestic performance in Salle Wilfrid-Pelletier in Place des Arts from October 6 to 8. The concert, an entry in the Histoires sans paroles – Harmonium symphonique trilogy, is enhanced with living tableaux and a dash of multimedia animation.

Bran Van 3000, whose music took Montreal by storm and made fans around the world in the late 90s, cap a months-long 25th anniversary tour for their hit album Glee, at Club Soda on September 30 and October 1. Get ready to hear the band’s biggest hits live!

The American rocker who has been known as Father John Misty for the last ten years returns to Montreal on September 26 for a concert at MTelus, featuring tunes from his latest album, Chloë and the Next 20th Century. British singer Suki Waterhouse will open.