Four festivals for the long weekend! 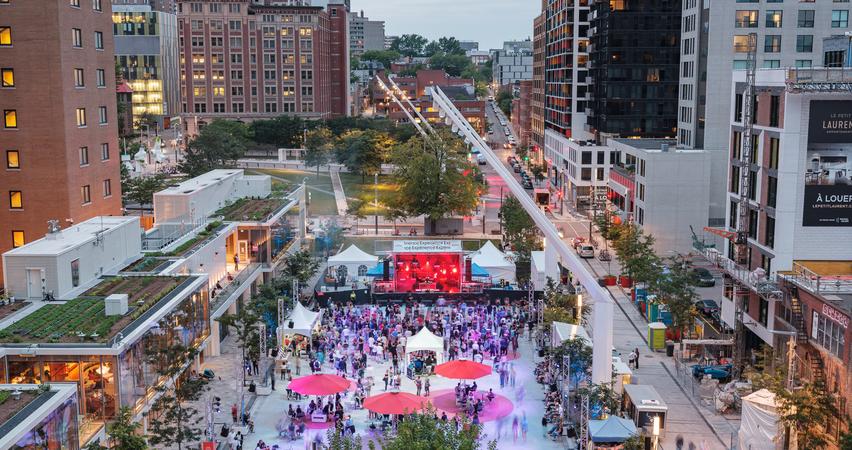 The Festival JOAT, the Estival du nouveau cinéma, the Festival DISTRIX and the Festival MEG Montréal will animate the Quartier des spectacles with dance, cinema, urban art and electronic music. You'll be spoiled for choice during your Labour Day weekend!

This urban dance festival is the brainchild of choreographer Handy “HYA” Yacinthe, a Canadian street dance pioneer and co-choreographer of America’s Best Dance Crew. For a week, the festival brings together more than 150 artists and presents a wide variety of shows and activities, from dance battles and introductory workshops to master classes and exhibitions. The festival is the perfect place to immerse yourself in the world of the African American dances that have taken the world by storm. Must-see performances include dance battles at Club Soda on September 1, 2 and 4, as well as the concert by funk and R&B band Fredy V & the Foundation on Saturday, September 3, on the Place des Arts Esplanade.

The FNC has been delighting cinephiles for more than a half century. With its 51st edition just around the corner, the festival invites the public to its second annual summer movie event, the Estival du nouveau cinéma. The four-night series of outdoor screenings will take place on Esplanade Tranquille in the Quartier des Spectacles. The deck chairs start coming out at 6 p.m., and the audience will also have access to themed bar and restaurant service. It’s the perfect setting to (re)watch L’Infonie inachevée, the engrossing Roger Frappier documentary about the poetry-and-music duo of Raoul Duguay and Walter Boudreau, on September 1. On September 3, another musical documentary, Hallelujah: Leonard Cohen, a Journey, a Song, by Dan Geller and Dayna Goldfine, ells the unlikely story of the Montreal poet’s iconic song.

For three days, this festival invites you to immerse yourself in the world of urban art and sports. There are four sections: breaking, graffiti, rap and basketball, in the form of 3-on-3 games. It’s a rare opportunity to attend both arts and sports competitions, including rap battles, dance, rope-skipping and dunking! There’s even a spot in the program for comedy, with the Punch Club Street Impro with comedian Phil Roy on Friday, September 2, in Place des Festivals. Lastly, don’t miss the big closing concert on Sunday, September 4, in Place des Festivals featuring female rappers Jennie Laguerre, Parazar and MCM and their male colleagues Gros Big Raccoon and Shreez!

Society for Arts and Technology

Founded in 1999 by Mustapha Terki and Jacques Primeau, this festival is holding its 23rd edition this year, and it’s still at the avant-garde of electronic music. A perfect platform for emerging artists, it is also a catalyst for collaborations between musicians from Europe and the Americas. In the Quartier des Spectacles, the Society for Arts and Technology (SAT) will be the venue for a wide variety of gatherings and performances. On Friday, September 2, there will be shows by Miel de montagne, Étienne Dufresne and Afternoon Bike Ride, followed by DJ Coeo. On Saturday, September 3, Joachim Pastor and Stereoclip will take the stage after Mike Shabb and HUGO TSR.