10 artists to check out at the Montreal First Peoples' Festival 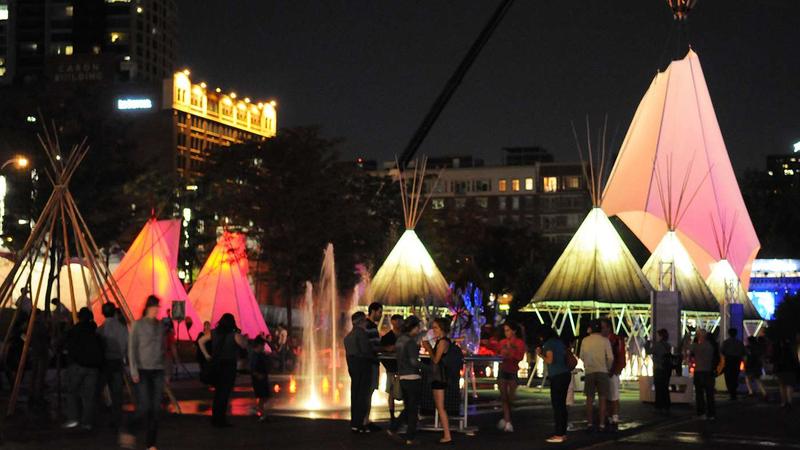 The Montreal First Peoples’ Festival runs from August 9 to 18, giving audiences a chance to enjoy and participate in the cultural renaissance of the Indigenous peoples of the Americas. For ten days, Place des Festivals will be the epicentre of intense artistic activity happening throughout the Quartier des Spectacles. The 32nd edition of this increasingly popular multidisciplinary festival provides a perfect opportunity to get to know Indigenous cultures and their increasingly popular artists. Here are a few to check out!

Place des Festivals will groove to numerous concerts featuring established and up-and-coming artists. Hailing from Manawan, Pinaskin is a band that remains in peak form despite having made its début more than 20 years ago. The group’s members are from the Attikamekw Nation, and their songs evoke the community’s past and present. Their free concert is on August 12. Singing in French and Innu, Matiu is a singer-songwriter from Maliotenam who had a hit with Petikat, his critically acclaimed first album that landed him gigs around the world. For his concert on July 13, the gravelly-voiced folk and blues singer will introduce his second album, Tipatshimushtunan, which means “tell us a story.”

Several more intimate concerts will be presented in Les Jardins Gamelin, such as Esther Pennell on August 11. The folk singer is well known to music lovers from Northern Ontario to Montreal. Her latest album, Big Dream, was nominated for country album of the year at the Summer Solstice Indigenous Music Awards in 2021. From August 13 to 18, the Jardins stage features the veteran rocker Mack Mackenzie, frontman of the alt-country band Three O’Clock Train and a familiar voice on stages all over the continent.

Over the course of two centuries, more than 150,000 Indigenous children were abducted from their families and sent to residential schools. Author Omer St-Onges wrote and performs Uteï, a play based on the traumatic experience. The work, inspired by his own life, presents his own experiences and those of his friends who were not as fortunate as him. Directed by Xavier Huard, this autobiographical work will be presented on August 15 in Place des Festivals.

Known for its expertise in visual arts, fashion and pow wow dances, The Dime Collective, a Montreal-based quartet of artists, divides its time between Canada and Italy. On August 13, in Place des Festivals, the group will present a collection of wearable artworks made from dimes during the pandemic.

Cinephiles won’t want to miss an evening of free animated films at the Grande Bibliothèque on August 10. The three works to be shown include Angakusajaujuq: The Shaman’s Apprentice, inspired by a traditional story from Baffin Island, by Mohawk filmmaker Courtney Montour.

Bilingual filmmaker Sonia Bonspille-Boileau wrote and directed the six-episode dramatic series Pour toi, Flora, which tells the story of an Anishinaabe brother and sister who spent their childhood in a residential school run by the Oblates, and who are now trying to come to terms with their past. On August 11, at the National Film Board of Canada, the director will present a master class on the art of writing for television and will explain how she handled the painful historical reality of a very recent era, the demands of television production, and her own expectations.