The circus is back in town! 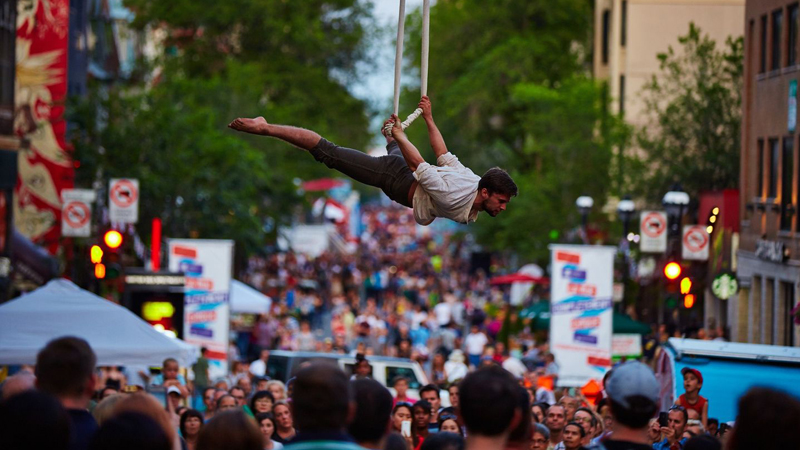 When it’s summer in Montreal, fans of the living arts have the privilege of enjoying a unique contemporary circus event, the MONTRÉAL COMPLÈTEMENT CiRQUE festival. We spoke with the festival’s director and co-founder, Nadine Marchand. Reading time : 4 min.

AFTER TWO YEARS OF FESTIVALS BEING SHUT DOWN BY THE PANDEMIC, AND ON THE EVE OF AN ESPECIALLY ACTION-PACKED 13TH EDITION, HOW ARE YOU FEELING?

We’re super excited to see audiences again after all this time! It goes without saying that the artists are thrilled, but so are all the cultural workers, technicians and other team members. MONTRÉAL COMPLÈTEMENT CiRQUE is back this year with a truly thrilling edition! Circus is all about the spirit of discovery, joy and amazement, and it’s always a real pleasure to see people exploring our outdoor sites. We love to see the delight and amazement on their faces after a show!

CAN YOU TELL US ABOUT THE UNIQUE NEW 3GÉANTS PROJECT? WHERE DID THE IDEA COME FROM? WHAT’S THE CONCEPT?

It’s a special project tied in with the relaunch of tourism in downtown Montreal. We asked ourselves: how can circus contribute to the relaunch? The idea of giants stood out because they combine the height and space needed for circus acts, while creating a character with an incredible presence and a unique look. From east to west across the city – in Les Jardins Gamelin, on the Place Ville Marie esplanade and in Parc Vinet – we meet three steel giants, designed for artists with superb stages and enormous acrobatic arches open to the city. To bring the three giants to life, we invited three companies to work with them: Cirque Éloize, Les 7 Doigts and Machine de Cirque. While working together in creative workshops, the artists imagined a red thread running through the entire project. The shows are inspired by towering figures in Quebec culture – our own giants, in every medium, from Gilles Vigneault to Joséphine Bacon to Jean-Paul Riopelle.

WHAT CAN AUDIENCES EXPECT FROM THE GIANT IN LES JARDINS GAMELIN?

Like the other two, our giant in Les Jardins Gamelin is seriously impressive! The concept by Cirque Éloize is very musical, with a live singer and pianist on stage. The performance is notably influenced by singer Rufus Wainwright, choreographer Louise Lecavalier and painter Corno. These figures colour the music, as well as the set design and the artists’ movements. There are some breathtaking acrobatic routines involving a pool of water on-stage! I don’t want to reveal everything because the audience will love the surprises we have in store, but I will say it’s a very powerful show.

WHAT’S HAPPENING WITH THE FREE OUTDOOR PROGRAMMING ON SAINT-DENIS ST. IN THE QUARTIER DES SPECTACLES?

Like each year, the part of Saint-Denis located in the Quartier Latin will be focused on the circus, becoming a big open-air circus ring! There are several completely distinct sides of it to explore. Sometimes it’s all about acrobatics and spectacle, at other times comedy and clowning. This year, we’re very proud to welcome the students of the National Circus School, who will animate the site at different times. They’ll take over the space and join festivalgoers in creating a party atmosphere! We’ve also created a new space in Place Pasteur, the Cirqu’easy. It’s a place for relaxing and socializing, having a drink, kicking back and enjoying the summer with live music and an enormous bar. There’s a catwalk for circus routines, where you could see a surprise performance at any moment.

IF YOU HAD TO CHOOSE THREE MUST-SEE SHOWS, WHAT WOULD THEY BE?

This is always such a tough question to answer! The festival’s opening show, Après la nuit, is absolutely unique. There’s the band CHANCES in the middle of the TOHU, while aerial routines go on above the musicians. The acrobats seem to fall from the sky, and it’s absolutely magical! Also at the TOHU, don’t miss the musical show BARKA by Gypsy Kumbia, a group that creates expertly blended rhythms. It’s a true cabaret, complete with a bar where you can sip a drink while watching the show, surrounded by a great party vibe. Lastly, I’d recommend a show called La Famille GoldenCrust. It’s an outdoor event that combines circus and comedy built around a pair of endearing and original snowbirds!