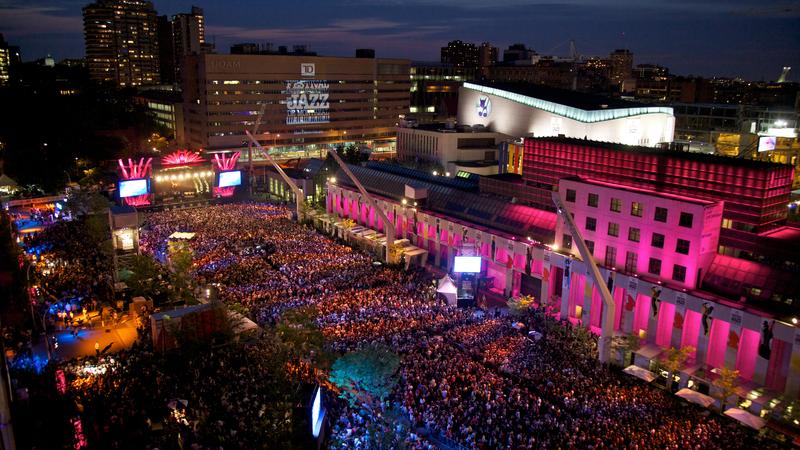 Summer is just around the corner, and that means festival season will soon be in full swing! All of your favourite events are back, and they’ll happen in quick succession over the coming weeks, making this summer in the city’s cultural heart feel like one big party. Here’s a quick look at what’s in store!

The world’s biggest jazz festival has been electrifying downtown Montreal for more than 40 years. This year, it will once again bring together hundreds of local and visiting artists to celebrate every genre of music related to jazz. The highlights include Kamasi Washington on the TD Stage on July 2, Clay and Friends at the same venue on July 7 and the famous hip hop group The Roots, which will play the big closing show on July 9, also on the TD Stage.

North America’s first international festival of circus arts is back for a 13th edition to give the city a much-needed dose of fantasy, thanks in no small part to the 3GÉANTS project, presented by Ivanhoé Cambridge. The unique project will install three 50-foot giants in the city, including one in Les Jardins Gamelin. Throughout the festival, Cirque Éloize will present an original free show in the Jardins each evening at 6 and 9:30 p.m.

This famous festival, showcasing the cultures of Africa, the Caribbean and Latin America, brings a festive vibe to the city with its 36th edition. Ivorian reggaeton star Tiken Jah Fakoly will play the opening indoor concert at MTelus on July 13, but there will also be plenty of great music on the outdoor stages. Don’t miss the Nigerian pop superstar nicknamed Mama Africa, Yemi Alade, on the TD-Radio-Canada Stage on July 25, or the Ivorian bassist known as the Queen of Afro-Groove, Manou Gallo, on the Loto-Québec stage, July 20.

The return to normal is timely for the comedy festival, coinciding with its 40th anniversary! In the run-up to the star-studded 40th Anniversary Gala on July 30 (line-up TBA), don’t miss top comics like Kevin Hart (July 29), Patton Oswalt (July 29) and Bill Burr (July 30), as well as perennial crowd pleasers like The Nasty Show and Midnight Surprise.

This comedy festival, launched in 2009, is now well-established as a springboard for up-and-coming comedians, along with great new talents in theatre and music. On July 14 at Studio Hydro-Québec, the Canfran Comedy Show brings the two solitudes together for the kind of bilingual comedy event that can only happen here. And at Pub l’Île noire from July 23-25, catch The Funny Juice Club, featuring three hilarious new local talents.

Rafael Payare, the new musical director of the Orchestre Symphonique de Montréal, will experience this wonderful summer festival for the first time. This year’s event offers an immersion in the original languages, music and cultures of the Americas. Esplanade Tranquille will be the venue for chamber music performances and body percussion workshops for children, while the public spaces around Place des Arts will host concerts, talks and a wide variety of stimulating activities.

Montreal has nearly 150,000 residents with Italian roots, and this festival celebrates their significant contributions to our local culture. There will be two days of activities in the Quartier des Spectacles. Program details will be announced soon.

Since its inception in 2000, this festival of electronic music and real-time audio-visual performance has grown in popularity each year. The 23rd edition promises to be especially rich, with more than a hundred artists from 21 countries. It will include free performances on Esplanade Tranquille daily from 5 to 11 p.m., featuring artists like Quebec’s own Magdala or Korea’s machìna.

This large open-air festival brings great energy to downtown Montreal with a free program including not only fashion and design, but urban art and music. The festival also hosts local and international personalities eager to share their artistic vision. Program details will be announced soon.