The singing and dancing heart of Montreal 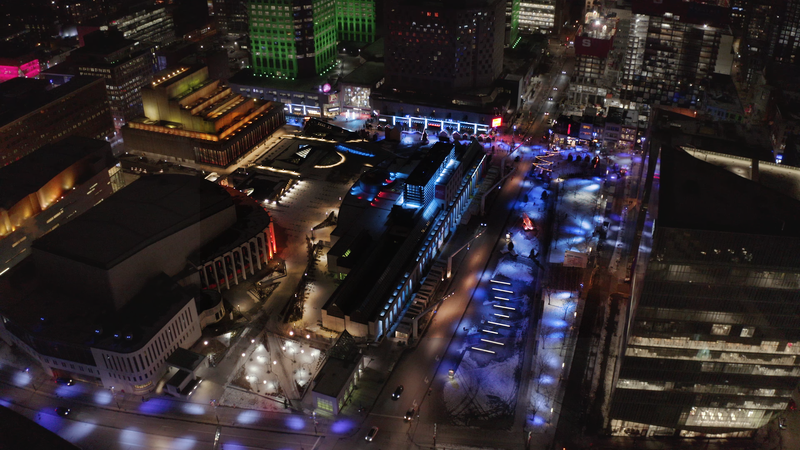 The Quartier des Spectacles is a lively place this winter, and, to visitors’ great delight it transforms into a gigantic dance floor. Each evening from 7 to 8 p.m., the heart of the city grooves to catchy music and dazzling lights, sparking an irresistible urge to dance. Cœur dansant is a work being presented as part of the 12th annual Luminothérapie event. We spoke with its creators, composer David Drury, lighting designer Bruno Rafie, and video projection and motion design artistic director Benoît Piccolini, to learn more about the origins of the piece.

Who had the original idea for Cœur dansant, and what kind of experience were you aiming to give the public?

B.P.: The proposal came from the Quartier des Spectacles. We had all worked on contracts for the Partnership before, and we were immediately captivated by the project.

D.D.: The basic idea was to create a playful, upbeat work as a sequel to Cœur battant, which energized the Quartier des Spectacles last year. Initially, we wanted Cœur dansant to be a celebration of the end of the pandemic. We might have been a little over-optimistic on that front!

B.R.: We wanted to present a work that made the return to the Quartier more joyful and that made people want to celebrate that moment of reconnection and rediscovery of the downtown core. Even though the context is not the one we all would have wanted, I think we achieved our goal.

How do you approach the creation of a work like Cœur dansant?

D.D.: It was quite unique because we had never worked together, and it’s a complex piece. Fortunately, we found that we worked very well together.

B.P.: We took turns with the project. David led the first phase by composing the music. Next, I developed the visuals. Lastly, Benoît had the difficult task of coordinating everything and solving the technical issues that inevitably come with a project of this scope.

B.R.: We came to the realization that the area bounded by Clark, de Maisonneuve, Balmoral and Sainte-Catherine West is rather large! That means we’re talking about a thousand lights to control, because during Cœur dansant, the lighting changes with the music. And that doesn’t include the lights in Parc Hydro-Québec, those of the other Luminothérapie installations and the area’s permanent lighting. The scope of the work was significant, but we had the tools, expertise and passion needed to overcome every obstacle.

Were there some unexpected challenges?

B.P.: Of course, we had to deal with a variety of technical problems, but that’s just part of the overall challenge. It was more rewarding than anything else.

B.R.: As creators, we were pretty spoiled. You have to keep in mind that what makes it possible to control and synchronize lights in the Quartier des Spectacles is the district’s fibre optic network, which doesn’t exist anywhere else in the world. Nothing compares to it in terms of coverage or technological sophistication, and our peers around the world envy it.

David, how did you approach composing the music for Cœur dansant?

D.D.: The music sets not only the rhythm but the tone. This original composition is not a loop but a piece with an intensity curve. It has three parts: the first is abstract and electronic, the second is funkier thanks to the dominant bass and percussion, and the third has a livelier beat. I also worked with two singers, and the vocals give the track a more human quality, which is essential.

In your opinion, what is the most surprising thing about Cœur dansant?

D.D.: It’s like a public show without a program, or a spontaneous performance. What makes this work so special, and in some sense mysterious, is that it comes as a surprise. The public isn’t expecting to see this sudden animation, and reactions vary widely. It’s as if we’re being launched into a new, more dynamic and festive, level of reality!

B.P: What I find particularly interesting with Cœur dansant is that we appreciate it differently depending on where we are in the Quartier des Spectacles. Places like Parc Hydro-Québec and the Luminothérapie installations, especially Entre les rangs, whose transformation is spectacular, take on a radical new look. A person standing outside the Wilder Building won’t see the same thing at all as someone walking along Sainte-Catherine Street. And that makes it worthwhile to experience Cœur dansant again and again!

A production of the Partenariat du Quartier des Spectacles