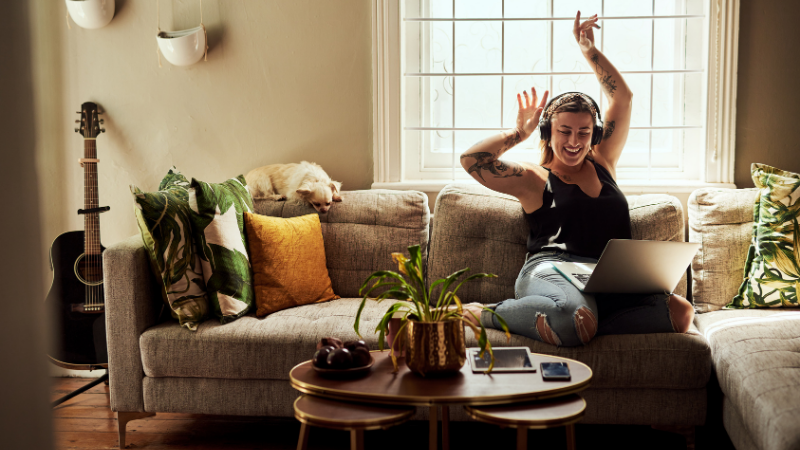 As we start a new year, any reason is a good reason to dive into our local cultural scene. While you wait to reunite with your favourite venues, you can still enjoy some concerts and shows online. Here are a few inspiring online activities and outings in the Quartier des Spectacles.

If you can’t be there, you can still enjoy the theatre from the comfort of home. TNM invites you to listen to Normand Chaurette’s Les Reines, a radio play inspired by the works of Shakespeare. Directed by Denis Marleau and starring Céline Bonnier, Sylvie Léonard and Sophie Cadieux, the play transports us to London in the late 15th century, where we follow the machinations of six intriguing protagonists scheming to take the English throne.

Among the live theatre captures presented as on-demand videos by Théâtre Duceppe, we’re especially eager to see L’Amour est un dumpling by Mathieu Quesnel and Nathalie Doummar, a play about the reunion of two old lovers, and Manuel de la vie sauvage, a business and technology satire by Jean-Philippe Baril Guérard. Both productions are available online until March 30.

If you want to see an exhibition in person, don’t miss Blackity. This exploration of the history and impact of Black Canadian contemporary artists from the 1970s to the present, curated by Joana Joachim, will be on display at the Artexte gallery until March 26. A virtual version is also available.

Poet, singer-songwriter and novelist Leonard Cohen is still being honoured at the Musée d’art contemporain de Montréal. With A Crack in Everything, an original concept featuring more than 50 works, the MAC dedicates a free virtual exhibition to the great Montrealer, exploring the connections between his work and contemporary art.

On January 27, jazz and fado fans won’t want to miss a live virtual concert by singer Suzi Silva, accompanied by musicians José Brites and Sébastien Clément, presented by Vision Diversité as part of the En toute intimité series. You can watch it on the organization’s Facebook page.

To mark the first anniversary of the arrival of its new music director, the Orchestre Symphonique de Montréal invites you to a virtual romantic rendezvous: Rafael Payare conducts Brahms’ First Symphony, streaming for free until January 31.

Le Vivier is a major Quebec cultural organization dedicated to promoting new music. It is presenting online replays of a variety of concerts and productions – from electroacoustic to dance to improvisational music – from its Fall 2020 season. You’re sure to find some exciting new sounds!

If you’re a cinephile craving fresh films to watch, don’t miss the fourth edition of the Pleins écrans festival, happening online until January 23 – for free! Among the 40-some films are two Oscar contenders for best fictional short film: Frimas by Marianne Farley, presented on January 18, and Les grandes claques by Annie St-Pierre, on January 20.

Luminothérapie has long since established itself as a not-to-be-missed Montreal winter event. This season the famous circuit of interactive and luminous installations has a few surprises for visitors. Come discover the enchanting new works that make the current edition one of the best yet!

A walk downtown is also a chance to appreciate the video projections lighting up building façades, including a tribute to winter by illustrator Cyrielle Tremblay, 100% Chance of Snow, now showing on the walls outside Saint-Laurent metro station and the façade of the Grande Bibliothèque. Also worth checking out are a pair of works from the Cité Mémoire project, La naissance du monde, in the Quartier Latin, which illustrates the transformation of Montreal through the ages, and Dorimène et Alphonse, at Complexe Desjardins, honouring the memory of Mouvement Desjardins’ founding couple.

Paroles d’image : Que savez-vous de moi ? is an original work currently in the display windows of Pavillon Judith-Jasmin at UQAM. The long sentence written by Céline Huyghebaert and Sophie Jodoin challenges, startles and interrogates everyone who walks past.

Presented at the Cinémathèque québécoise until February 13, House of Skin is a video installation produced by Sabrina Ratté, with music by Roger Tellier-Craig. The work, which combines analogue and digital technology, is inspired by the cinematic world of David Cronenberg. It explores the director’s major themes, such as mutation and the body-machine relationship.

If you love visual art, be sure to catch the retrospective of Montreal artist Sorel Cohen at Centre VOX, until February 19. Sorel Cohen : Métaphores conceptuelles features photographs and previously unseen sculptures by the avant-garde feminist artist.

Lastly, if you appreciate contemporary art you’ll be thrilled to know that the many galleries of the Belgo are open and welcoming visitors during the cold snap.