Splinter: the art of communicating with the imponderable 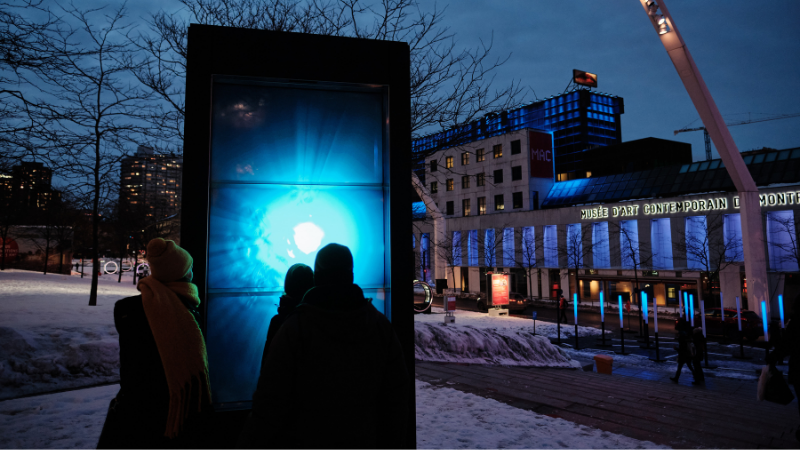 Place des Festivals: six monoliths seem to have emerged from the ground, forming a mysterious architecture. Your arrival is their cue to come to life and break into a captivating dance of sounds and lights that transforms as you move. We spoke with Splinter’s designers: Hugo Laliberté and Jonathan Jeanson the co-founders of the Ottomata studio and Pierre-Luc Gauthier, production manager at Jack World.

A PROJECT LIKE THIS REQUIRES COLLABORATION. HOW DID THE TWO COMPANIES GET TOGETHER?

HL: Most of the Luminothérapie projects produced for the Quartier des Spectacles are collaborative efforts, so it’s completely normal to join forces to create an interactive work of this scale. At Ottomata, we specialize in interactivity and immersion, but we needed Jack World’s expertise in production and implementation. The material aspect is fundamental to the Splinter project, but the audio-visual side is where we’re most capable.

PLG: Once our friends at Ottomata developed and refined the concept, Jack World got to work on the technical design. Our designers quickly sketched out the monoliths on paper, then made 3D models, and gradually worked toward production. We also put a lot of thought into the precise positioning of the monoliths before installing them on the site.

SPLINTER TAKES US TO A MYSTERIOUS LAND OF SHADOWS AND ENTITIES IN MOTION ON THE MONOLITHS. WHERE DID THAT IDEA COME FROM?

HL: The core inspiration is science fiction. We love Science-Fiction worlds, because to us they echo the mystery of monoliths made by people thousands of years ago, at a time when such technical precision seems unlikely to us. The entities are also representations of a world that doesn’t work according to the same rules as the human world, but by rules beyond our comprehension. Among other things, during the creative process we thought of the black monolith from 2001: A Space Odyssey and the same film’s iconic AI character, HAL.

WHAT INTRIGUES YOU ABOUT THE MONUMENTAL CHARACTER OF MONOLITHS?

JJ et HL : We are particularly fascinated by the grandeur of Stonehenge, which was built using methods that people today do not fully understand, and likewise for the pyramids of Egypt. For us, the goal is to capture that monumental character and invite people into a majestic world where they come into contact with something much larger than themselves. The idea is to evoke that feeling of being only a speck of dust before something immense. We wanted to play on a scale that highlights the sharp contrast between the tiny and the gigantic.

IS IT SAFE TO ASSUME IT TOOK MANY HOURS OF COMPLEX WORK TO COMPLETE THE INSTALLATION?

PLG: It is a complex piece incorporating screens and laser sensors, which capture the hand movements of visitors without any physical contact with the screen. The motions are then translated into sound and light by software developed by Ottomata, running on a computer hidden inside the structure. There are heating and electrical systems that allow the installation to work optimally in winter. It took at least 400 hours to design, then another 650 hours to build, including cutting, assembling, welding and installing the pieces. Then you also have to add time for laser cutting and painting, and significant logistical work to develop a simple process for shipping the work anywhere in the world.

WHAT SHOULD PEOPLE DO TO MAKE THE MOST OF THE EXPERIENCE?

PLG: We recommend interacting with the monoliths for a good amount of time. The displays change over time, and the soundscape shifts often. Don’t stand in front of one monolith for too long – try different positions instead. And don’t hesitate to explore every possibility, to really soak up the environment.

JJ et HL : We also want people to coordinate and interact with each other to create something together, something bigger than themselves. I don’t want to spoil it, but let’s say there may be occasional signals to encourage collaboration, draw attention to the broader environment, and inspire people to communicate with each other. After reaching a certain point in exploring the panels, and with enough people acting at the same time, there should be a thrilling peak. As for the sound environment, we also planned for unexpected frequencies to be heard at certain moments, again based on people’s movements. At times, the monoliths will behave in surprising ways.