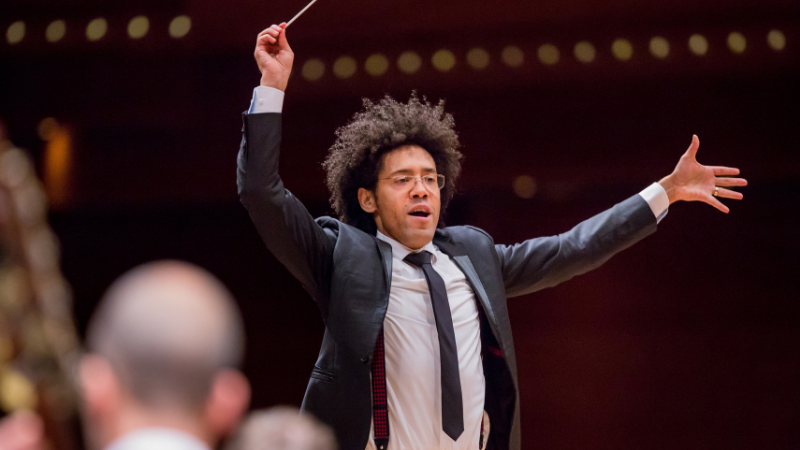 Even during his first encounter with the OSM, in 2018, the chemistry was obvious. His almost mystical connection with the Montreal musicians, combined with a stellar résumé, made Rafael Payare a natural choice to take the orchestra’s helm from Kent Nagano. A profile of the young Venezuelan artist, whose meteoric rise to international acclaim started just a few years ago.

The OSM’s ninth Music Director – and first from South America – made a strong first impression on his first visit to Quebec. As guest conductor of the OSM in September 2018, he wowed audiences and critics alike.

Rafael Payare remembers the moment well. “From the first rehearsal, I felt a deep connection with the musicians. It was as if we’d known each other for a long time, and the possibilities were infinite. It was a very special musical experience – powerful, even magical. We had a bond and a level of trust that let us take musical risks. Those feelings only grew stronger with each rehearsal and concert.”

Is it Montrealers’ Latin character and natural affinity for South American culture? Or maybe Payare’s subtle way of delivering powerfully expressive yet finely nuanced performances, said to be perfectly respectful of the work’s dramaturgy? His robust posture and distinctive shock of hair, giving him a rock-star aura and undeniable charisma?

It’s all that, and more. Payare is known for his emotional depth – he’s widely seen as an instinctive artist, always looking for that extra little bit of soul and vitality in each piece. He conducts on his toes, making his radiant presence part of the show without ever overdoing it. He has a keen sense of spectacle, yet he also has a deep appreciation for all things intricate and delicate.

Payare’s sunny and friendly disposition is the perfect follow-up to Nagano’s smiling but serious demeanour. He is the farthest thing from a disciplinarian whose exacting standards manifest as severity. On the contrary, the OSM’s musicians describe Payare as sensitive and warm, a man who believes in a supportive, collaborative and egalitarian approach.

Payare was 14 when he started studying the French horn, eventually becoming principal horn with Venezuela’s Simón Bolívar Symphony Orchestra. He soon discovered an intense interest in conducting. While watching Italian maestro Giuseppe Sinopoli, known for his wire-rimmed glasses and explosive style, the young musician had an epiphany. He envisioned becoming a conductor himself – in his old age. But fate had other plans: he was appointed music director of Northern Ireland’s Ulster Orchestra in 2014, when he was 34, and of the San Diego Symphony in 2018.

His international reputation was already established by then, thanks to guest gigs with orchestras in Vienna, Paris, Munich, Chicago and Pittsburgh, where he conducted numerous concerts and special programs. One of the most memorable was a widely acclaimed guest appearance with the Vienna Philharmonic in January 2015. (A glowing recommendation from the great American conductor Lorin Maazel had prompted the venerable institution to welcome Payare – a heartening story of recognition and fellowship between two great artists.) He has also made a name for himself conducting opera across Europe.

Coming from a not-particularly-musical middle-class family, Payare understands how important it is to make music accessible to all. He’s a graduate of Venezuela’s acclaimed El Sistema musical education program, known for openness to all social classes. He has found much the same spirit in Montreal, where the OSM takes pride in reaching out to the public, particularly through its Classical Spree festival.

A sociable fellow, Payare exudes warmth and sincerity. He will surely enjoy chatting with audience members in the foyer of the Maison Symphonique, in French. “I don’t yet speak French as well as I’d like to, but I’m working hard to soak up the beauty and nuances of this magnificent language. I’m taking intensive courses, and I also have a demanding tutor – my daughter, who attends a French school in San Diego. She’s only 4, but she’s closely monitoring her dad’s progress, especially my pronunciation!”

A series of five new concerts will be available for streaming on OSM.ca until April 13, including two performances in which music lovers can see Rafael Payare in action.

Alexander Shelley, the music director of the NAC Orchestra, will take the podium for Symphonic Love Stories: from Tchaikovsky to Bernstein, Thomas Le Duc-Moreau will conduct Stravinsky’s the Soldier’s Tale_, and young Finnish conductor Dalia Stasevska will lead the orchestra through a program of pieces by Sibelius and Shostakovich.