A symphonic Easter with the Orchestre Métropolitain 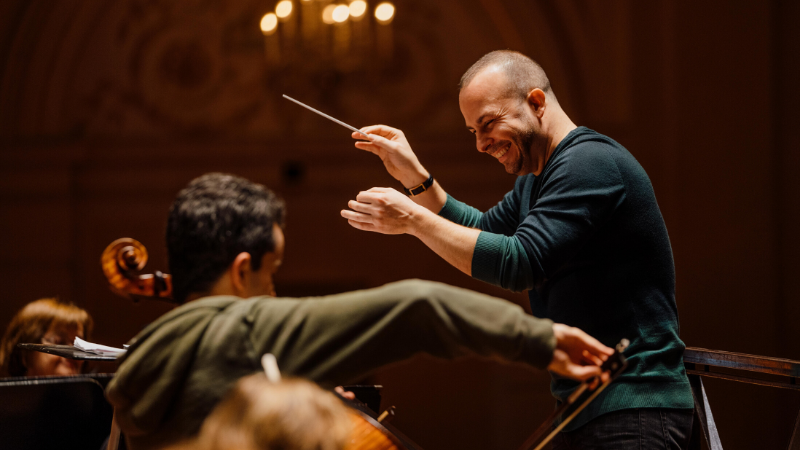 Sadly, many of us have had to cancel our Easter feast. To soften the blow, the Orchestre Métropolitain (OM) and the Quartier des Spectacles are presenting a musical long weekend. Two streaming concerts and a fascinating documentary will be available free from the OM’s website. What a beautiful way to welcome spring!

“We’re closer to our audience than ever before! Thanks to online streaming, everyone can enjoy some of our most memorable concerts in the comfort of home,” says a proud Yannick Nézet-Séguin, artistic director and conductor of the Orchestre Métropolitain.

Outside, the days are getting nicer and nicer. You might be stuck inside, but you can still bring springtime home with a summer orchestral pop concert by Pierre Lapointe, a thrilling rendition of a Verdi masterpiece or a candid documentary…

Pierre Lapointe and the OM close the 2007 Francos

It was a hot August night in 2007. That year, the Francos ended on an unforgettable note: Pierre Lapointe performing his album La forêt des mal-aimés, accompanied by Yannick Nézet-Séguin and the Orchestre Métropolitain. Clad in majestic black, as he almost always was in the 2000s, Lapointe stands in a shadowy forest set, surrounded by the OM’s musicians, to perform Deux par deux rassemblés, Le columbarium, Le lion imberbe and more. “It was a splendid summer night at the Francos, with 100,000 people gathered to hear a symphonic version of Pierre’s album La forêt des mal-aimés,” Nézet-Séguin recalls.

Starting Friday, the OM will also make available the video of a masterful concert starring musicians from the OM and members of the Chœur Métropolitain. Four exceptional soloists make this version of Verdi’s Requiem one for the ages. The piece’s magnificent textures are rendered sublimely by American soprano Angela Meade’s tragic voice, the vivid vocal colours of mezzosoprano Ekaterina Gubanova, the Mozartian voice of tenor Matthew Polenzani and the commanding presence of bass-baritone Sir Bryn Terfel. With its operatic splendour and reverence for the sacred, this is perfect Easter music.

Behind the scenes at the OM

A tight-knit group of musicians, unwavering discipline, a unique relationship between a conductor and his players: these are the raw ingredients for Ensemble, a behind-the-scenes look at the OM’s first-ever international tour, which took the orchestra to Europe’s finest concert halls in 2017. Director Jean-Nicolas Orhon takes a full-immersion approach as he follows the orchestra for a year, documenting its daily routines with a respectful, attentive eye.

The OM at home