100% cardboard : The Jacques Cartier Bridge as you’ve never seen – or built – it before! 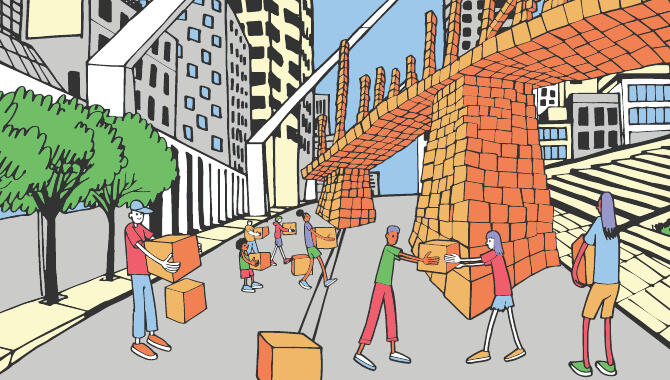 On September 15 and 16 there won’t be any orange cones in or around Place des Festivals, but it’s still going to be a great big construction site! A unique, free and hands-on community event, Construisons Monumental! will culminate in the construction of a cardboard replica of a Montreal icon, the Jacques Cartier Bridge. Everyone is invited to help build the structure – 45 feet tall and 90 feet long – and to come back to help demolish it!

To learn more about this original experience, which promises to be fun and spectacular in equal measures, we spoke with Olivier Grossetête, the artist behind the unique structure. The visual artist from France has presented temporary participatory works around the world, winning plenty of admirers along the way. 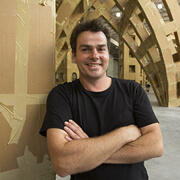 WHERE DID YOU GET THE IDEA OF BUILDING MONUMENTAL STRUCTURES OUT OF CARDBOARD?

The first time I did something likes this was in Valence, where I was going to school. I made a replica of the city hall. My idea was to play with the image of power by using a low-value material that also projects an image of phoniness. So there was a double contradiction that inspired me: first, between classic architecture, which is supposed to stand the test of time, and the ephemeral structure; and second, between the image of power and the embodiment of fakeness. I started that first piece off in my own corner, but I eventually needed help to finish it. Fortunately, my friends stepped up, and then passers-by spontaneously stopped to help us raise it. Over time, I perfected my construction technique and came to rely more and more on public participation. 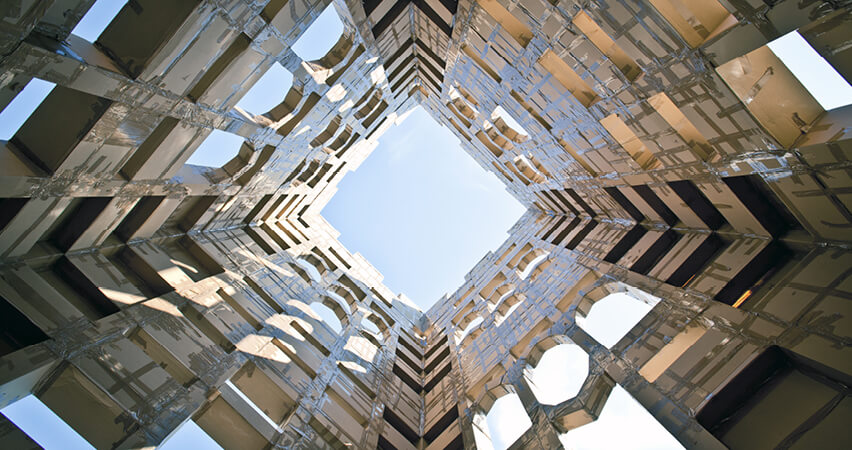 DO YOU FEEL LIKE YOU’RE HELPING PEOPLE TAKE OWNERSHIP OF THE ARCHITECTURE AROUND THEM?

In general, I think architecture is completely beyond us. Because above all, architecture is a representation of power: nice streets, courthouses, churches… Confronted with that embodiment of money and power – to which we only submit – we can feel totally excluded. Working with cardboard helps restore a human dimension to architecture, and lets people embrace it again. And teamwork leads to some great, powerful moments. It’s also a gigantic construction set, so it takes people back to childhood. 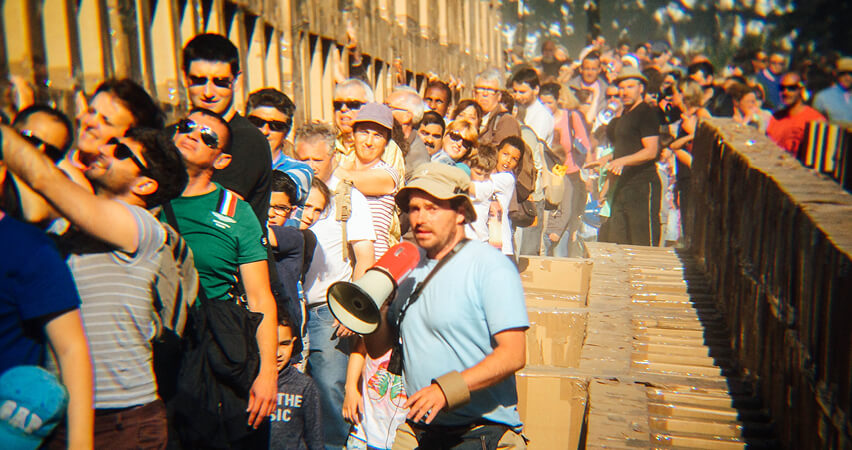 HOW DO YOU WORK WITH THE PUBLIC?

First, we hold a workshop where we explain the artistic intent and give some examples of what we can do. Beforehand, people don’t always have a clear idea of just how big the finished structure is going to be. Afterwards, we get right into the work and start making components: arches, frameworks and so on… In general, it all happens chaotically, but naturally! There will be workshops in Montreal that people can sign up for. 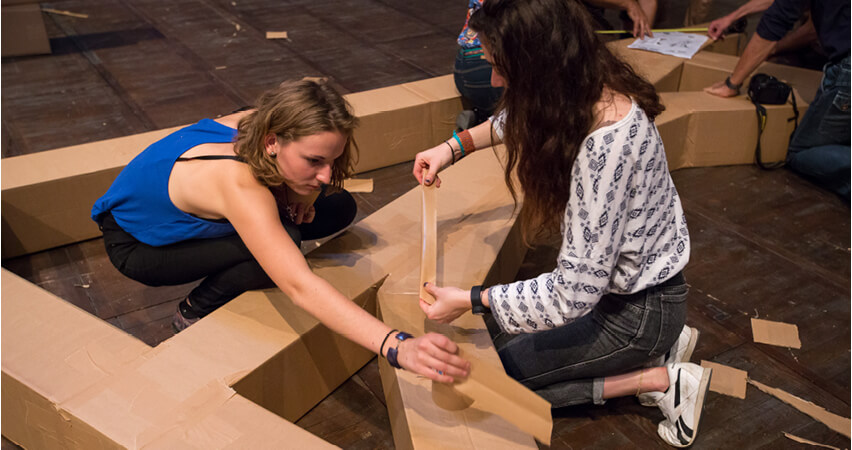 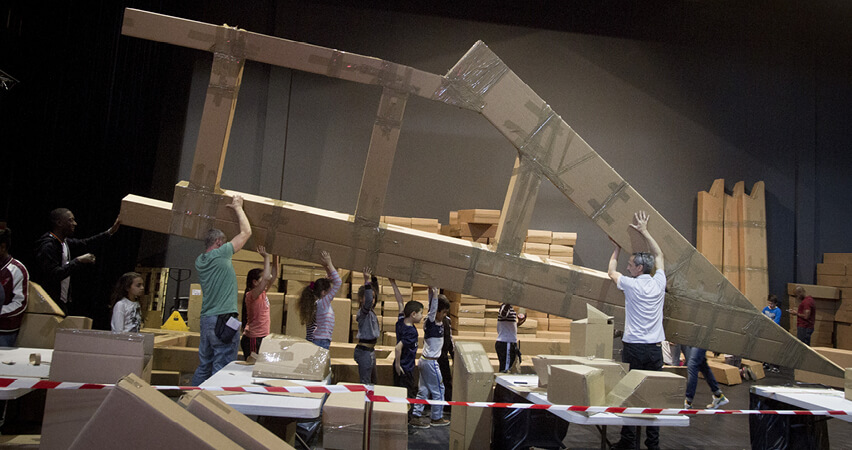 TO FINISH THE PIECE, PARTICIPANTS NEED TO WORK TOGETHER.

Absolutely! The experience has a playful side that might seem surprising at first. Usually, the first people to jump in are children, and that makes the simplicity of the whole thing clear, so then adults get involved and start playing. A good thing, too, because the work does require physical strength. We need all the participants to contribute some energy! And during the assembly, you quickly notice a few people who’ve figured out exactly what needs to be done, and we don’t hesitate to give them assignments. 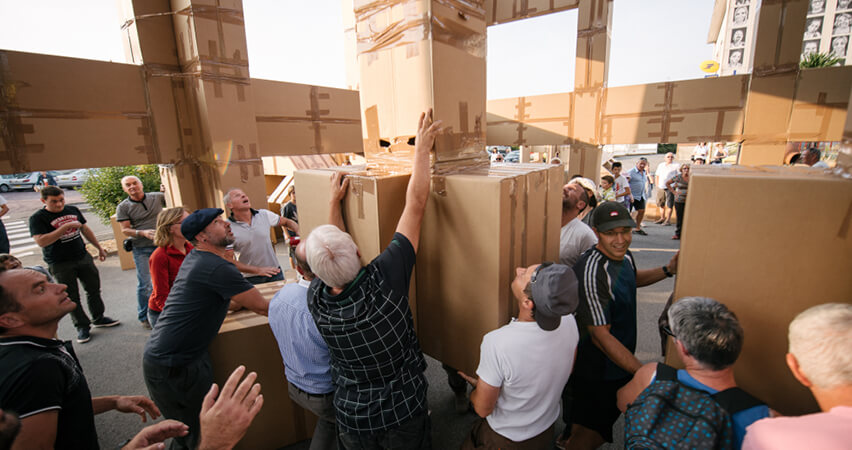 There’s an element of stress relief. It’s still the same logic: we build together, then we demolish together. It’s part of the adventure. What interests me, personally, is the creative act – putting everything in place to arrive at something finished: knowledge, intelligence, energy, other people’s energy. The demolition is a very playful step. It does have a certain violence to it, but it’s joyful, not aggressive. It’s festive and cathartic! And it’s the conclusion that was planned from the start. A cardboard bridge can’t be built to last! 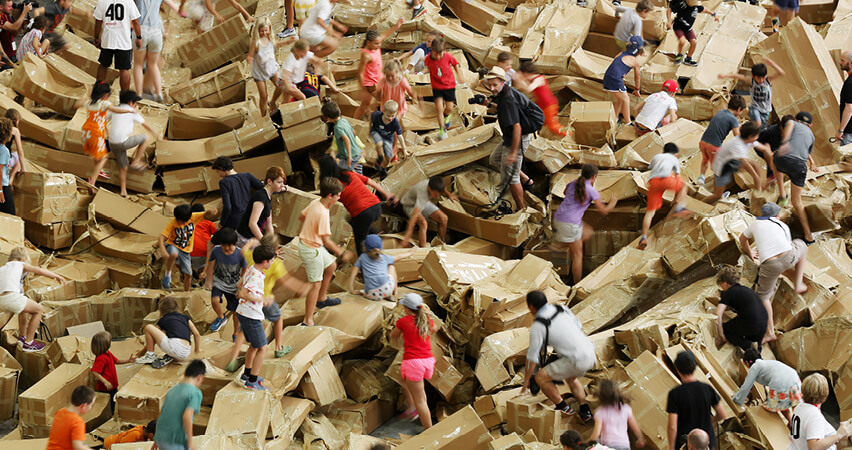 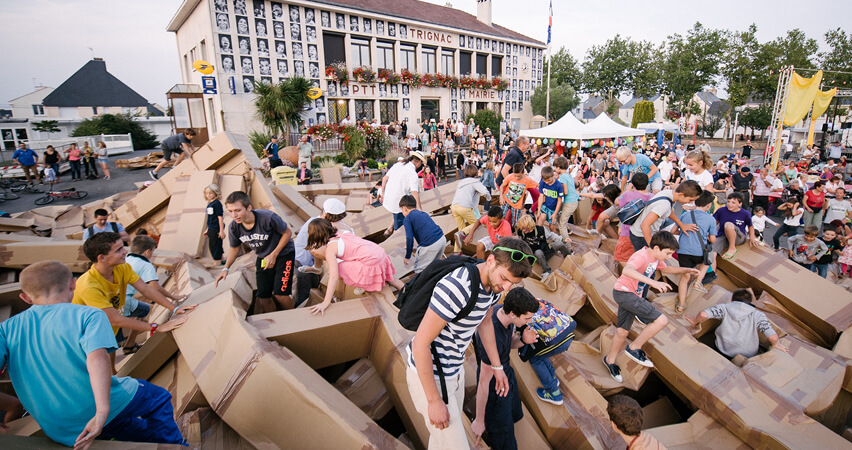 This Quebec-first group experience is presented by Les Escales Improbables de Montréal as part of their 15th season and the Quartier des Spectacles Partnership, with the support of Cascades, the Consulate General of France in Quebec and the Jacques Cartier and Champlain Bridges Incorporated, and in partnership with Place des Arts. 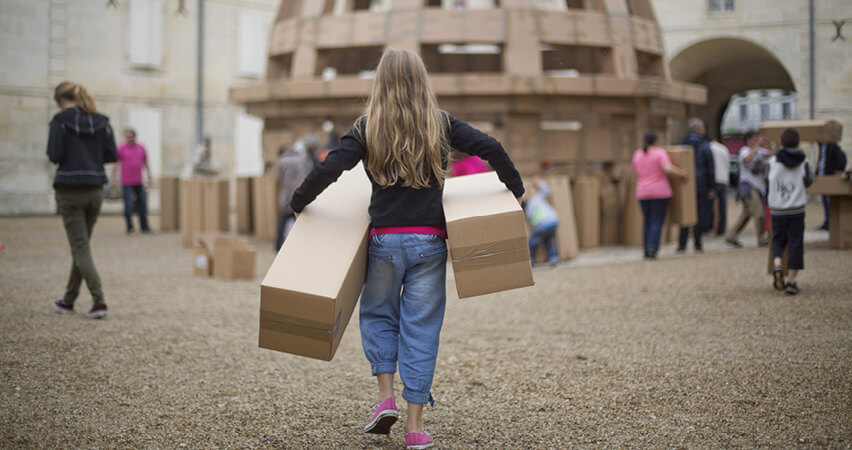