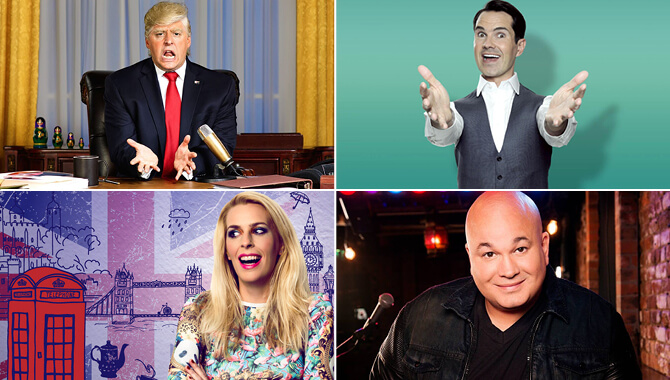 For nearly three sizzling weeks this summer, Montreal will become the capital of the comedy universe. The 36th edition of the Just for Laughs Festival gets underway with dozens of shows from July 14 to 29, along with quirky, wild and raw offerings from its sister festivals, OFF-JFL.

Here are few suggestions to whet your appetite, no matter your taste in comedy.

FOR THE PERSON WHO DOESN’T GO TO COMEDY CLUBS

Robert Kelly is at the helm of the annual bacchanal of raunchy comedy that is The Nasty Show. Standout Brad Williams, tour-de-force Nikki Glaser and homegrown comic Derek Seguin are part of this year’s crop of abrasive and dirty comics.

FOR THE MUSICAL COMEDY FAN

LA musical trio The Cooties, along with special guests Garfunkel & Oates, put on an evening of standup and musical comedy in Amp'd: The Music & Comedy Show, at Les Katacombes.

Eliot Glazer trained as a singer before trying out comedy: hear his high-end covers of trashy songs in Haunting Renditions Live.

Sing along (and kick ass) with Never Surrender, ‘The World’s Greatest Lip-Sync Band’ at Café Cleopatra.

Did you fall for the royals when Harry married Meghan? Or have you always been a tea-sipping Corrie fan? Either way, you love Brit(ish), which brings together talented comedy minds from across the pond, like Nish Kumar and Sara Pascoe, for two shows.

READY FOR ANYTHING OR CAN’T DECIDE?

Night owls will want to snag tickets for Midnight Surprise, a daily intimate show with one consistent feature: the time. Mega stars like Dave Chappelle have swung by in previous editions. It’s the perfect way to capture the zeitgeist of the fest in one show. You’re guaranteed a laugh at the Best of the Fest, a roundup of belly-tickling acts packed into 60 minutes.

While Donald Trump is busy scribbling his own jokes on Twitter, impersonator Anthony Atamanuik has been honing his impression of 45 on tour and with The President Show, which he created and stars in for Comedy Central. Catch Trump’s address to the Great White North in Anthony Atamanuik's Make Canada America Again! The Trump Rally.