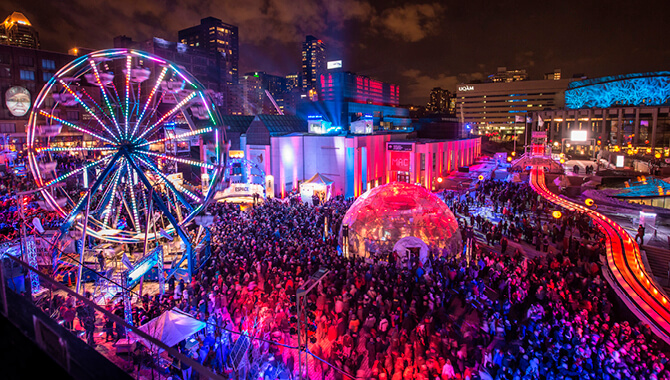 Montreal's winter may seem endless, but Nuit Blanche, on March 3, is a sure sign that spring is around the corner! Each year during MONTRÉAL EN LUMIÈRE, more than 300,000 people stay up late to turn the city into their playground. Winter? Bah! This is a night for enjoying everything Montreal has to offer! The Quartier des Spectacles is the heart of the action, with most of its 80 cultural venues inviting you to enjoy something very special.

Because this year's Nuit Blanche is the 15th annual edition, Laurent Saulnier, vice-president of programming for MONTRÉAL EN LUMIÈRE, spoke with us to share some of the secrets to the event's success.

Here are 15 activities to thrill you until the wee hours!

The popular zipline, slide and Ferris wheel have become cherished traditions for devotees of Nuit Blanche in the Quartier. Thrills, laughs and great memories make the wait well worthwhile.

And what would Nuit Blanche be without an outdoor party? Head for the Chalet, where you'll enjoy an intimate concert with the folk sounds of Canailles, then dance the night away with DJ and VJ Bell Toddy Flores and Zack Cola.

Complexe Desjardins
Noon to midnight, $20 or free after 8 p.m.

Quebec is earning a global reputation for its delicious ciders, especially its award-winning ice ciders. This event is your chance to sample the province's best, while taking some time out to warm up. Still or sparkling? Pick up some $1 tasting coupons and decide which you love best! Violinist Eric Speed and DJ Yro provide the tunes.

Montreal is North America's digital arts capital. Now in its second year, Illuminart is a circuit of works combining light and technology. There are a dozen pieces, including one by interactive media students at UQAM: Propolis is a fun interactive installation inspired by the group behaviour of bees.

And don't miss the two works by local artists featured on the Place des Arts Esplanade: Chimes by the Blackbox collective, invites you to trigger a set of chimes made up of more than 30 illuminated tubes and eight speakers, transforming the space with sound and light; and Nor Mind by Daniel Iregui, a fascinating touch-sensitive interactive sculpture - when you interact with it, you change its rhythm and patterns.

ART SHOWS AND A SURPRISE FESTIVAL

As always, Nuit Blanche will feature plenty of art. At the Goethe-Institut, the interactive installation Zeit-Slice transports you to Berlin through a 360-degree panorama that brings people together through virtual reality and olfactory data.

Over at the Belgo, there's something for every taste: sound sampling and collage against a poetic backdrop, a group exhibition on the theme of the coexistence of elements, and a show combining visual arts and meditation.

VOX, centre de l'image contemporaine, invites you to an all-new show by young Toronto-based artist Erdem Taşdelen, and a selection of works by the Chto Delat collective, from Russia.

During Nuit Blanche, the metro will be open all night to make it easy to get from activity to activity and home afterwards. Saint-Laurent station is part of the action with the artists of the Sunday Scratch Sessions doing improvised scratching to live instrumental music. The metro has never been more entertaining! Don't forget to pick up a $5 pass to see you through the night.

The late, great Montreal graffiti artist Scaner represented urban culture in all its complexity. He broke through the boundary separating graffiti from fine art - his work was truly universal. He left his mark on walls in Mexico, New York, Paris, San Juan, Berlin and Rome. Here, the Under Pressure festival pays tribute with an evening of graffiti, digital art, photography and DJ sets.

How about an early International Women's Day celebration? Rapper Sahramée invites you to a unique show featuring up-and-coming DJs, beatmakers and MCs from Montreal's hip-hop scene. An evening of incredible and unconventional talent! 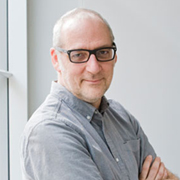 How did Nuit Blanche originate?

The idea originally came from Paris, where contemporary artists would take over spaces spontaneously. The concept soon migrated to Brussels, then three years later to Montreal. We adapted the event for one of our defining features - the Montreal winter. Of course, it snowed during our first Nuit Blanche! From the start, we wanted a festive night that everyone could enjoy. Fifteen years later, we have 200 different activities, most of them free, in 152 venues around 9 hubs, for everyone aged 7 to 77!

Why do you think Nuit Blanche is such a unique experience?

It's because we have so many partners who put on extraordinary events. Without them, we would never have such a rich variety of activities. One great example is the Nuit des 100 improvisateurs at Théâtre Sainte-Catherine - it's amazing what they're able to do. Our strength comes from pooling creative talent. That's the secret to giving the public an unforgettable night. We experience distinctly different visions of Montreal through the imagination of the organizers. The end result is that Nuit Blanche brings Montrealers together.

After 15 years, is there anything that doesn't astonish you anymore?

Each year, I'm impressed with the number of people who participate. The city really buzzes! All over town, the streets are filled with people. For one night, people put aside their winter cocooning habits to enjoy the city's cultural offerings. Montrealers are inquisitive by nature. They're always looking for new discoveries. And that open-mindedness is a powerful inspiration for the partners to come up with original ideas. The public is truly on board with what we're doing.